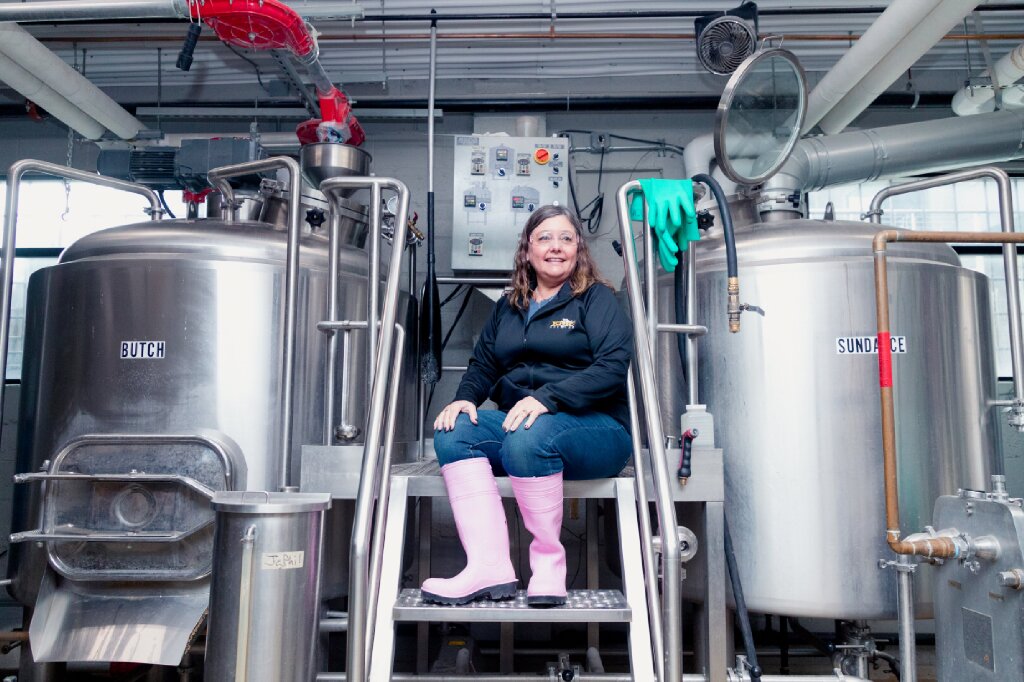 There are few people as passionate about beer as the ladies at Pink Boots Society, an organization subverting the boys clubs through their love of the craft. A collective of female brewers, Pink Boots is a national organization with chapters all over the world. The Utah chapter is especially prolific, as the state has one of the largest female presences in beer production in the country. On a Saturday afternoon, I caught up with this badass gang of ladies as they prepared for their Tap Takeover hosted by Mountain West Cider on April 5. Unfortunately, due to the heath and safety concerns related to COVID-19 (Coronavirus), the event had been canceled after the time of this interview. Instead, Jacquie King, full-time Head Brewer of Research and Development at Roosters and longtime member of the organization says, “We will also have smaller tap takeovers at bars throughout the state, thus keeping everything below 100 people.”

Pink Boots has worked with various breweries around the state, creating tasty new brews with their special hops blend. April’s Tap Takeover at Mountain West was intended to be the first time they put together a public event. Helping organize the takeover were King, Eleanor Lewis of Proper Brewing and Jamie Burnham of Kiitos. Hosting the event was Mountain West, a Wasatch-born cider company with a strong female presence in both staff and ownership. “They have always been a big supporter of Pink Boots and all of us ladies in the industry,” says King. Strong, female-run companies are a big focus of the event, but Pink Boots’ intention is also promoting collaboration in the industry as a whole.

“The idea is for each brewery to brew a beer using the PBS hop blend, and then we can showcase all those beers,” says Burnham. At least 15 different breweries are putting their own particular spin on this year’s Pink Boots–branded hops, a Yakima Chief Hops blend that is hand picked each year—the current adaptation comprising Loral, Idaho Gem, El Dorado and Azacca. I was let in on a few products in the works, and we can expect to see (and drink) everything from hibiscus-infused IPAs to red ales to Pink Boots’ own zwickelbier. The only requirement is that brewers use the PBS hops blend, encouraging creativity and eccentricity in participants.

In addition to producing a variety of one-of-a-kind creations, Pink Boots’ mission still maintains the spirit to build an intimate relationship between brewers and consumers. “We want that personal experience and for people to feel like they can talk to us and ask about breweries and what we’re planning,” says Lewis. Events that bring together all kinds of beer lovers enriches the community, and a female-focused event helps further diversify the male-dominated industry. “[The goal is] getting the idea out there that there is this society for women to be in the industry and also that women can be in the industry because a lot of women think this is not an accessible thing,” says Lewis.

While Pink Boots planned to educate and collaborate with the community on April 5, they are also finding ways to have PBS beer purchases go back to the organization. Three dollars from every hop blend purchased goes back to Pink Boots, and a portion of the PBS Blend now being sold at Proper Brewing will be used to fundraise. Money raised goes toward Pink Boots’ more pedagogical goals like scholarship funding.

“We want that personal experience and for people to feel like they can talk to us and ask about breweries and what we’re planning.”

“One of the big benefits of being a member is you can apply for scholarships, and they range from beer training like Cicerone training to more technical training, and they’ll help you get that certification for technical-brewing scholarships,” says King. National scholarships allow members access to brewing knowledge where men are often the gatekeepers, further equalizing the field. One of the goals of the Utah PBS chapter is to create chapter-specific scholarships, giving members a better opportunity for offers.

Organizing events, pursuing educational opportunities and cultivating a community are labors of love for the women at Pink Boots, but it’s easy to understand why they keep coming back for more. “We are starting to plan next year’s [Tap Takeover] already, and it will be a true beer fest,” says King. They have a damn-good time while they make delicious beer and learn from some of the best minds in the industry.

After our interview, I got to hang out with Pink Boots as they crafted their zwickelbier intended for the Takeover. The smell of fresh hops filled the room while the seductive words of Marvin Gaye’s “Let’s Get It On” played during the yeast-pitching process. “It’s good luck!” someone said to me when I laughed at their provocative movements around the stainless steel vats. Having spent just a few hours with this group is enough to inspire an interest in brewing, and gives an exciting insight into how Utah’s craft beer industry is progressing. Keep an eye out on PBS’ social media platforms for more information on future Tap Takeovers on Facebook.