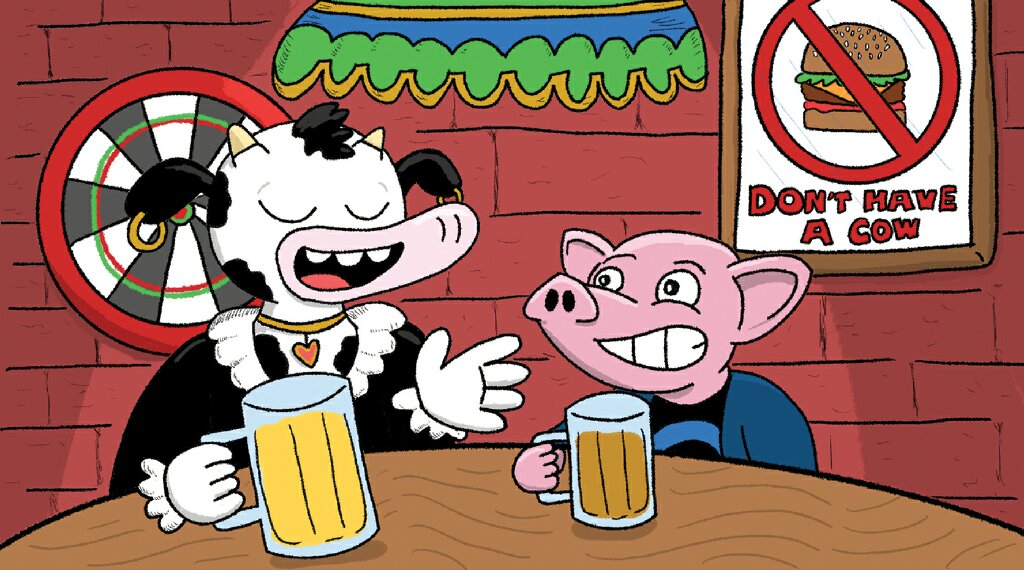 “Waiter, There’s a Fish in My Drink”: Is Your Beer Vegan?

Is your favorite crushable pint of brew vegan-friendly? As a longtime beer enthusiast and commercial brewer, I’m always interested in what goes into the beer I drink, and I get asked this question a lot. But most countries don’t require beer packaging to list ingredients or nutritional information, so the answer isn’t always clear. This article is a rough attempt to clarify the issue by providing insight into the brewing process from an experienced professional. It’s important to note that this article will not include any value judgment on any given lifestyle, and my goal is not to call out breweries for using these ingredients but, rather, to provide some tools to help keep your diet what you choose for it to be.

The basic ingredients of beer are vegan. Malted grain, hops, water and yeast all pass some quick tests. Grain and hops are plant products—a grass and a flowering vine, respectively—while yeast is millions of tiny, single-cell fungi. And water is … water. For a large percentage of the beer in the world, that’s all there is to it.

So where might animal products enter into the process? A significant portion of beer includes either additional ingredients to enhance flavor or additives used to help part of the beer-brewing process. There may be an odd or obscure ingredient used by a brewery that’s outside what is discussed below, but these are the most common animal products found in beer.

Ingredients used to enhance flavor are often easy to find because a brewery will usually want to advertise their presence. If a brewer uses any interesting ingredient, such as an herb or the exotic fruit in a recipe, that’s usually a hook to get the customer excited. Obviously, non-vegan choices like oyster shells in a classic English oyster stout or something more modern, like a bacon-infused porter, aren’t hard to pick out—but not everything is so apparent. Honey, an ingredient most beer drinkers will have seen at least once, is a great example. While there is a debate about whether honey is vegan-friendly or not, it’s undeniably an animal product. As an expensive ingredient, it would rarely be used and not specified, but thinking of all the “Honey Wheat Ale” I’ve seen on beer menus first cued me into the scope of the minefield vegan drinkers face every day.

Lactose is another ingredient that is becoming increasingly popular. As a food additive, lactose is separated from the whey portion of milk as a byproduct of the dairy industry and used in countless nutritional applications worldwide. Yeast cannot ferment lactose, so brewers started using it in Britain to add body and sweetness to styles like a “milk” or “cream” stout. It’s more commonly found today in hoppy or fruited beers, where it adds creaminess or complements the fruity flavors. Hazy or New England–style IPAs are the ones to watch here, or anything with the word “milkshake” in it. Confusingly, American-style cream ales usually don’t have any lactose. Not everyone uses it, but if you’re vegan—or lactose intolerant, for that matter—you should watch out for it.

It’s Not Rocket Science, But …

Some ingredients are even harder to see or find out about. These are things that are added to the beer during its brewing process to aid some specific technical aspect. These are often flavorless and impossible to detect in the final product. The main culprits here are fining agents, additives used to help clarify the beer, which can be present in any beer, regardless of flavor or style.

Two common fining agents are gelatin and isinglass. Gelatin is made from animal hooves and serves the same purpose it does in clarifying stock or making Jell-O: It electrostatically grabs small particles and conglomerates them together. In beer, this makes them easy to separate from the rest of the liquid. Isinglass is similar but made from the fried flotation bladders of various fish species, usually cod. Almost no trace of these products can be found in the final beer, but it can be enough that people with fish allergies should avoid it, if possible. The good news is that these fining agents, once quite common, have been mostly phased out in favor of mineral- or plant-based alternatives.

Now that you are aware of them, what can you do? Dietary concerns, such as those in this article, are driving changes in the brewing industry and are already widely adopted to make beverages more accessible to all. The more popular and international a beer is, the more likely it is to be vegan-friendly. There are even some resources online, such as barnivore.com, which allow you to search a database for specific alcoholic products. But smaller or newer breweries are unlikely to be listed on such sites.

My advice is to drink local beer and engage with your brewer or bartender. Be polite and ask questions about any ingredient that is off-limits to you. If the staff at your chosen establishment doesn’t immediately know the answer, I’ll bet they can find out from someone who does. Then you can belly up to the bar, confident that your tasty brew doesn’t have any fish in it.