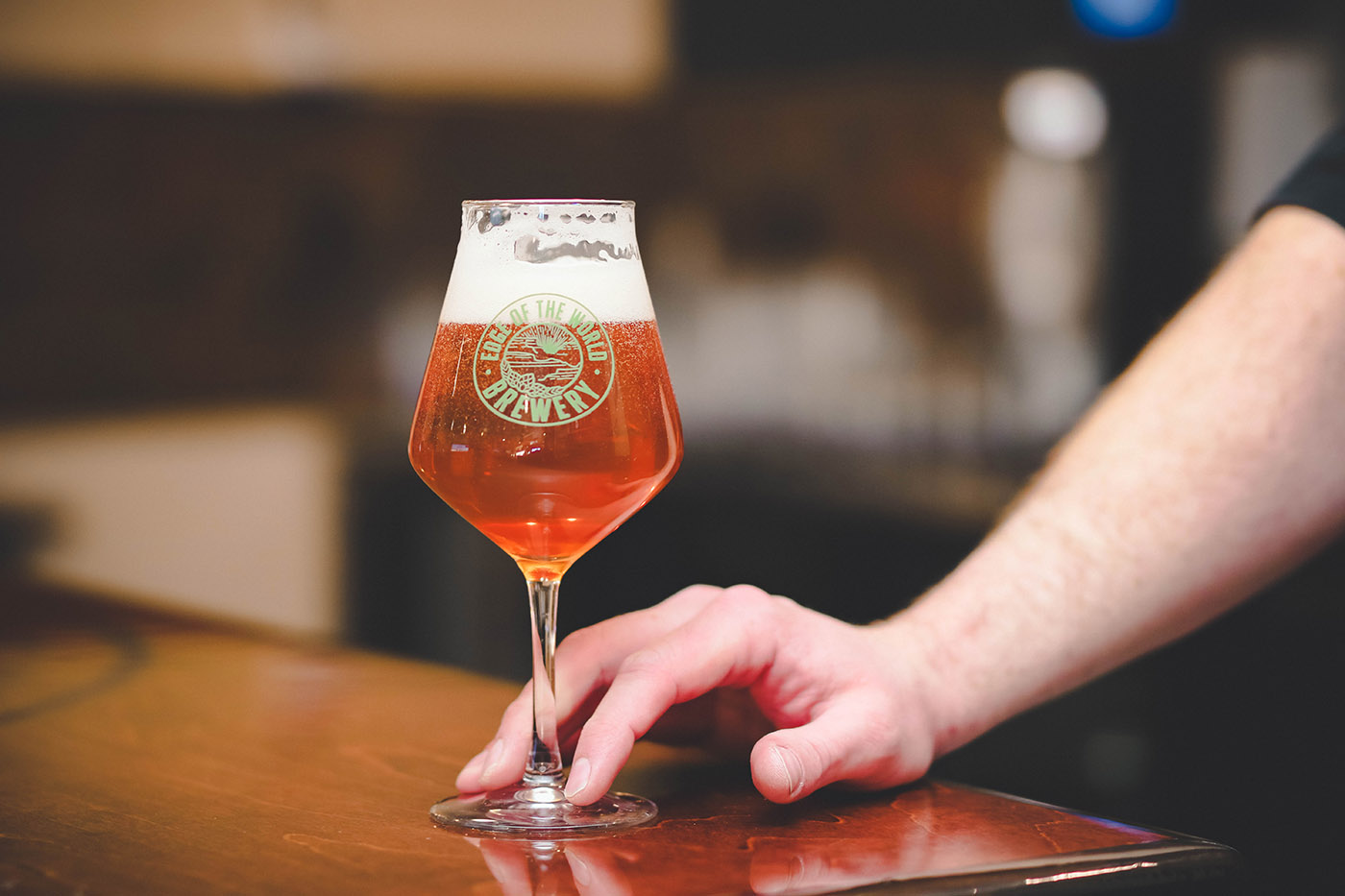 Photo courtesy of Edge of the World Brewery

Less Than One Mile Across the Arizona Border Sits Utah’s “Adopted” Edge Of The World...

The twin cities of Colorado City (Arizona) and Hildale (Utah) have been known as the home for The Fundamentalist Church of Jesus Christ of Latter-day Saints (FLDS) and other fundamental-practicing Mormons for over a century. Even though their reputation is changing, this notoriety means many people may be shocked to learn that this area—dubbed “Short Creek”—is also home to a self-proclaimed “adopted Utah brewery” less than one mile across the Arizona border.

Edge Of The World Brewery is the first drinking establishment in Short Creek, despite the fact that fundamentalist Mormons can drink alcohol because they broke away before the LDS Church enforced its famous “Words of Wisdom” (doctrine prohibiting alcohol) in the early 1900s. “The FLDS [church … and] fundamentalist Mormons more broadly are pretty open to alcohol,” says Raymond Hammon, who established Edge Of The World Brewery in April 2019 with Levi Williams. “It’s something that has kind of always been a part of our culture … so that market was already kind of made for us, and we already had that kind of community. It was just kind of a no brainer [to open a brewery] from that standpoint.”

“The FLDS [church … and] fundamentalist Mormons more broadly are pretty open to alcohol.”

However, Hammon says there’s more to the city than its “FLDS story.” The head brewer goes on to say, “That’s something that we are really proud about being a part of and showcasing—just some of the ways in which there’s just a lot of normal folks around here.”

Being passionate about beer, helping the community and “[being] known for something other than some of the less desirable parts of our history” aren’t the only elements to Edge Of The World Brewery. Hammon also points to the much-needed economic benefits it has brought to the area. “You know, there’s not a whole lot by way of economic opportunity out here,” he says. “Most … people commute for [their] jobs, and one of the things we wanted to do was do what we love and make money on it and help to build an economy here. There is a lot of tourist traffic coming here and it is a beautiful town, so we were lucky enough to sort of get on the ground with it, and it’s super exciting and fulfilling.”

“Most … people commute for [their] jobs, and one of the things we wanted to do was do what we love and make money on it and help to build an economy here.”

However, Hammon says tourists who otherwise might not have gotten off the highway aren’t the only visitors to the bar/brewery. Many regional locals—from St. George, Hurricane, Kanab and Springdale—have become regulars. He says, “There’s just a lot of beautiful scenery around here that attracts a lot of people, and we feel like it nice to have a place for everyone to stop, to enjoy our beers, to enjoy our town.”

Many of these visitors arrive because not only can they drink cold beer in a beautiful place and obtain respite from the desert’s grueling heat, but Edge Of The World Brewery is one of the few breweries in the region of southern Utah, alongside the fact that the nearest ones in Arizona are in Flagstaff. Hammon says the uniqueness of their region has ultimately helped them create stronger relationships with other Utah breweries, contributing to why Hammon says he considers it an adopted Utah brewery, despite being one mile into Arizona.

He adds that while he grew up outside of the city on the Arizona side, the decision to be in Colorado City was also in part due to Utah’s liquor laws. “We kind of felt like we had a better opportunity in Arizona for certain stylistic reasons with our beer,” Hammon says. “One thing about Arizona is that we are able to do pretty much what we want in terms of high-point beers on draft, so that was one of our motivations for staying on the Arizona side. Still, Utah brewers, even with those constraints, they knock them out of the park.”

Edge Of The World Brewery specializes in ales and has six beers on tap—including IPAs, porters, a pseudo-lager, fruited sours and seasonal saisons (summer 2021 is a lemon sage) made with as many local ingredients and flavors as possible. “We try to [source locally] as much as we can,” says Hammon. “Now, for some of our other beers, it’s kind of hard because of the area we are in because we are kind of far from the source of a lot of beer ingredients … We have a few people around here growing hops, but I haven’t used them yet, but I am excited to maybe in the future.”

“One thing about Arizona is that we are able to do pretty much what we want in terms of high-point beers on draft, so that was one of our motivations for staying on the Arizona side.”

At this time Hammon says they’re not able to distribute their brews yet because they can only keep up with their taproom demand at the moment, but there are plans to expand their selection soon. “We have six taps, and we are working on expanding our tap selection—it’s kind of a bottleneck for us. We are buying some more cooperage and kind of revamping our bar to hopefully double our tap selection, that way we can brew more beer and have somewhere for it to land,” he says.

Next time you’re headed down south to Zion National Park or the North Rim of The Grand Canyon, take a detour off the highway and stop in at Edge Of The World Brewery for a cold beer. The brewery/bar is open seven days a week, from 11 a.m. to 8 p.m. on Mon.–Wed. and 11 a.m. to 10 p.m. on Thur.–Sun. Visit @edgeoftheworldbrewery on Facebook or Instagram for more information.