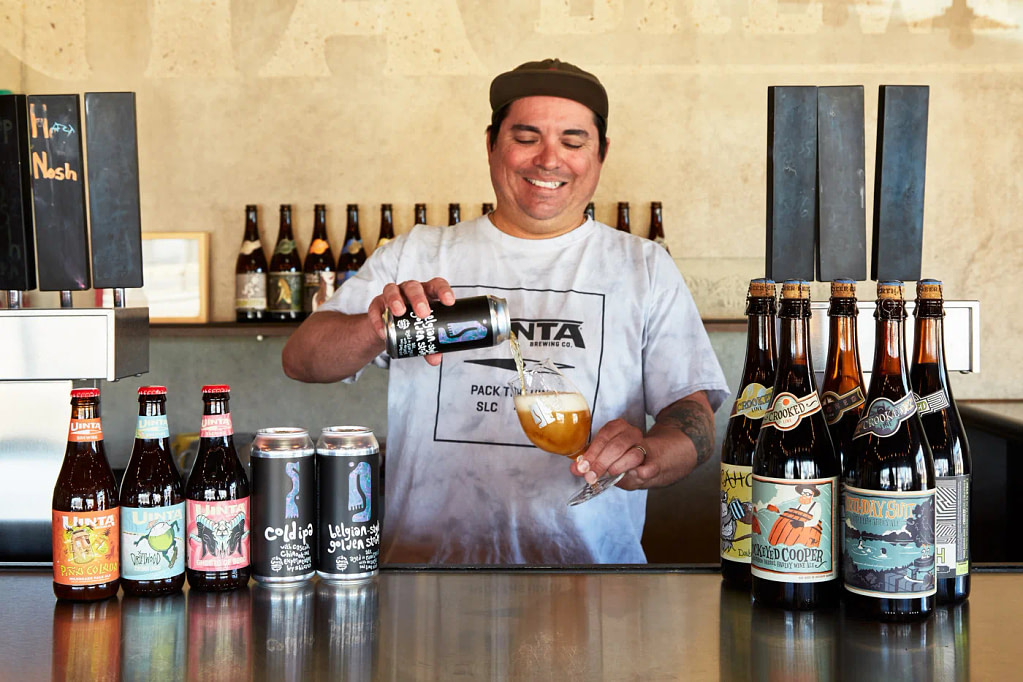 Uinta Brewing is keeping up their reputation for consistent innovation by merging their Small Batch and Crooked Line series into the Pro Line series. You may have noticed this with your new favorite Cold IPA, showcasing experimental hop HBC 1019 and the artwork of SLC local Griffin Siebert, using a pastel, marbled pattern within a figure made from negative space. If you were inspired by the abstract and colorful design of this can, then you’ll be delighted to know that Siebert’s full piece will be spread across all six Pro Line releases this year.

Crooked Line launched in 2010 with the Labyrinth Black Ale, the Cockeyed Cooper and the Tilted Smile, with labels designed by Trent Call, Travis Bone and Leia Bell, respectively. The mission’s quote was “Brewed off the Beaten Path,” intending to showcase different beer styles that weren’t as massively produced. The series blazed a trail for the new frontier of Uinta, with this beginning their usage of the 750-mL bottles and escaping the normal brand guidelines by utilizing local artists’ work for the labels. More recently, you may have enjoyed Crooked Line in a six pack of 12-oz cans, as they switched the series away from the bottles in the late 2010s. Now, Uinta has initiated the reinvention of the series and the local art mission with the 2022 merger. “The Crooked Line has changed so much over time, and the Pro Line is a good example of how we’ve picked different times in the Crooked Line and put them all together to showcase different time periods in the Crooked Line all at once,” says Uinta’s R+D Manager, Graham Doherty.

“Uinta has been a long time supporter of the SLC community and SLC art scene. I look at beer as local art as well, so it’s nice to merge the two.”

For the entire series, instead of releasing with a separate artist for each beer, Siebert was asked to commission one piece that Uinta could break up between the six-part series and he delivered a physical art piece that is currently hanging in the Uinta Brewhouse Pub. “The discussions were more conceptual than directional. Our aim was to create a visually coherent series that spoke to Griffin’s personal, unique lettering aesthetic,” says Uinta’s Field Marketing Manager, Leonard Gath. This differed from their past process of having artists create digital art on a label template, as well as this year having Uinta collaborate the beer names and styles with the artwork.

“Uinta has been a long time supporter of the SLC community and SLC art scene. I look at beer as local art as well, so it’s nice to merge the two,” says Uinta’s Marketing Director, Jeremy Worrell. Some of the past Crooked Line labels include Isaac Hastings’ skeletal take on Ghosts of Sego, Mike Tea’s tropical-cocktail, skateboard-sesh label for the Driftwood Coconut Lager and Brett Ferrin’s tiki-head, island-time design for the Piña Colada. “It’s important to continuously be evolving and experimenting; not chasing trends but creating our own trends,” Worrell says.

“The Pro Line is a good example of how we’ve picked different times in the Crooked Line and put them all together to showcase different time periods.”

Uinta is already brainstorming for its 30th anniversary, considering a 30-year “retrospective of Crooked Line.” They are also contemplating the return of the classic Labyrinth label, as well as working with some of their other legacy artists, including Lars Love Letters, Evan Memmott, Clay Cavender, Robin Banks, Nick Potter and Erin Potter.


In the meantime, you may enjoy the recently released Belgian-Style Golden Strong Ale and look forward to the Watermelon Sour, which will be released at the end of April 2022. Pro Line will continue on this year with a Juicy IPA, Cinnamon Roll Wheatwine Ale and the black sheep will return this fall as the Imperial Baba, currently aging in single malt whiskey barrels.