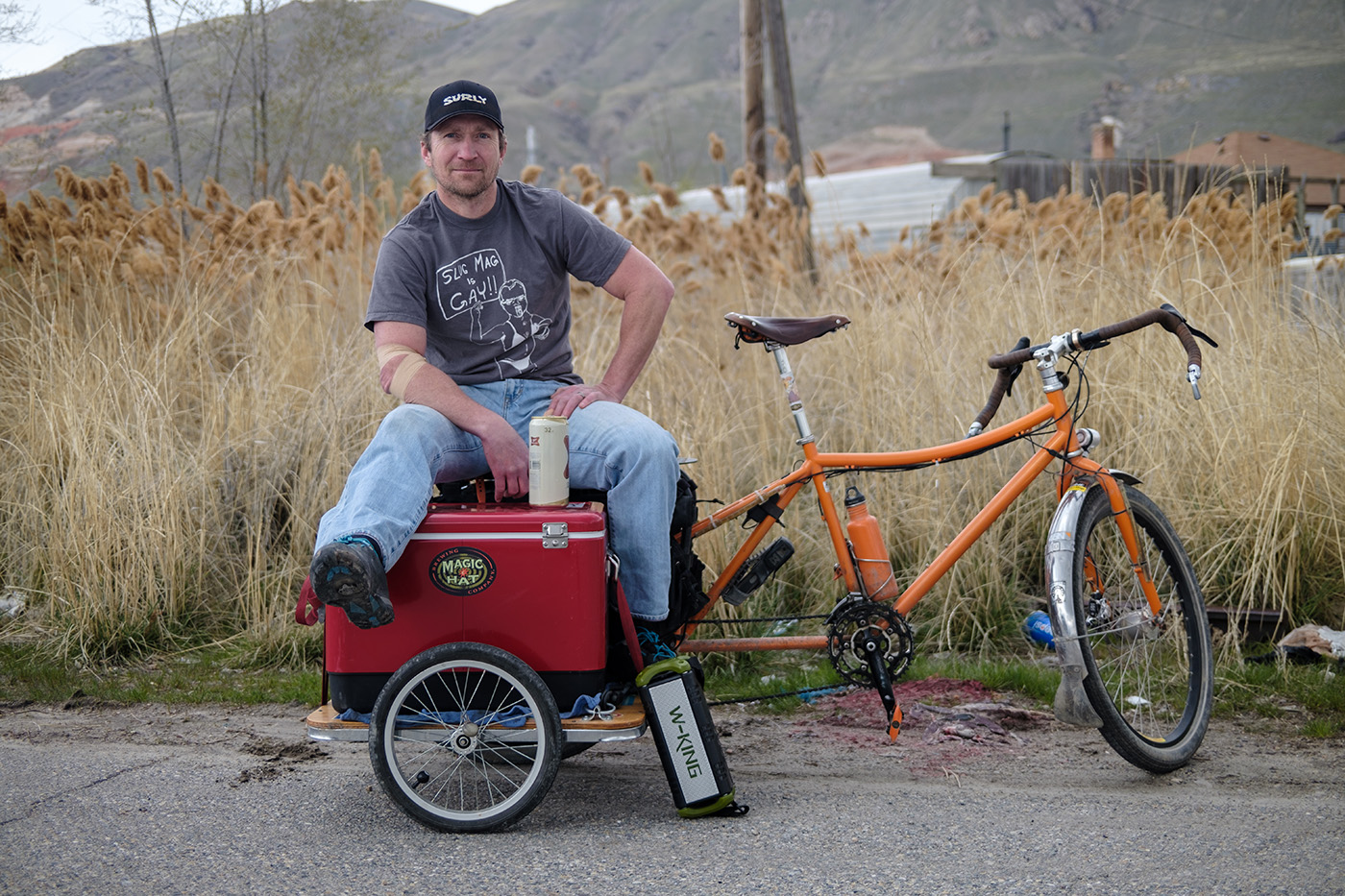 24MOTOR: 24 Minutes of the Oil Refinery

For much of my upbringing in Salt Lake City, I didn’t really know much about the bike scene. Mountain biking and riding laps around the Jordan River Parkway were staples of my childhood, but it wasn’t until my college years that I heard anything about the passion the SLC community has for social biking. After riding the 999 a few times, it finally started to click for me. Biking, drinking, blasting loud music and occasionally ignoring traffic laws is an incredible way to spend an evening making friends. 24MOTOR is a new event that aims to bring people together once a month for exactly that purpose. It’s lower-key than the 999, with a far- less strenuous route, but it’s packed with the same communal energy that makes social biking in SLC so great.

“Bring a bike, something to keep warm and something to keep your belly warm,” says Steve “bykmor” Wasmund. “[24MOTOR] was inspired by an event I had the opportunity to take part in—in Madison, Wisconsin—called 24MOTAB, that was 24 minutes of the abandoned building.” It’s a little different here in Salt Lake City, as 24MO- TOR stands for “24 minutes of the oil refinery,” says Wasmund. “I modeled it after exactly what they did, which was just a fun social event that would take place once a month on a Sunday.” While Was- mund advertises the event as a race, 24MOTOR is really just meant to bring people together and to get people biking.

Here in Salt Lake City, 24MOTOR starts promptly at 4:20 p.m. on the last Sunday of every month and runs till around sundown. You’ll find the group pedaling out from Saturday Cycles, the nearby HandleBar or Diversion at about 4 p.m. The loop itself is a bit hard to find on your own, wedged in between the interstate and the mysterious auspices of Blast Products right next to the railway. If you’re nervous that you won’t be able to find your way, you can always contact someone at Saturday Cycles, or peep the event’s Instagram handle @24_motor for a more precise meet-up location.

With our conversation surrounded by the hundreds of bikes hanging throughout Saturday Cycles’ storefront, I can’t help but get in the mood to crank out some turns on my two-wheeler. All bikes are welcome in the 24MOTOR race, though. “We’ve even had people there on unicycles,” says Wasmund. “No bike is really going to give you an advantage.” 24MOTOR is technically a race—technically—but by the sound of it, nobody takes it too seriously. Winning is really just a matter of chance. Racers begin doing laps around a short course while music blasts. After about 24 minutes, the music cuts out, and the next person to cross the starting line is crowned winner. The winner gets bragging rights and a dinky trophy, “but who really cares about that?” says Wasmund. The real purpose of the event is to get outside, to ride your bike, to socialize and to be merry.

Steve “bykmor” Wasmund is a humble dude, with a genuine love for biking. “[Biking] is my favorite thing to do, whether it’s riding or racing, mountain biking, on the road, on gravel, commuting …” he says. “I remember thinking when I was … still right about 20, this is something I could do for the rest of my life, and I hope to.” About halfway through our interview, someone started knocking on the front door of Saturday Cycles. Despite it being after hours, Wasmund was quick to act. The next thing I knew, Wasmund and the store’s owner, Mark Kennedy, were troubleshooting, digging through tools around the shop and rapidly fixing the flat on this guy’s bike trailer. Whether you’re a pro or don’t even own a bike, Wasmund wants to help get you riding, and 24MOTOR is a great opportunity for people of all skill levels. As Wasmund puts it, “There’s nothing intimidating about showing up to 24MOTOR.”

The real purpose of 24MOTOR is to get outside, to ride your bike, to socialize and to be merry.

Unfortunately, in March—after I interviewed Wasmund—shit really hit the fan with the whole COVID-19 stuff, and March’s 24MOTOR was necessarily canceled. Undeterred, I decided to bike the route on my own terms. Always in the mood to ride, Wasmund met me there for a few laps. Looming above the course, the Marathon Salt Lake City Oil Refinery cast an ominous shadow across our path.

“It has been there forever,” says Wasmund, “We don’t want these necessary but dangerous industries right in our town … I don’t know what role I’ll play in that, but you know, as I go out and bike around town, as I ride into work every day, it’s just something I think about being able to point a finger at and say, ‘Wow, look what’s happening right here.’” To that end, riding in 24MOTOR is a bit about thumbing your nose at the oil industry, as well as having a great time socializing.

Only time will tell whether or not COVID-19 will continue to affect 24MOTOR, but Wasmud is eager to get the show back on the road. You’ll find the most up-to-date info on 24MOTOR happenings on @24_motor on Instagram or by calling Saturday Cycles. Personally, I can’t wait to attend the next event, and I hope to see you there, too!