00:00 / 16:39
Spotify Stitcher
RSS Feed
Share
Link
Embed
Last year fellow lady cyclist Agnes Robl and a handful of others decided Salt Lake City needed a bike prom. Jonathan Morrison of the Bicycle Collective, along with a bunch of help from some more dedicated cyclists, made it a reality. Wouldn’t you know it, the hands-down most fun dance I’ve ever been to, I attended stag. I said no to all of my suitors, matched my dress to my pink bike chain and danced the night away with friends and strangers after going on one of the best-dressed group rides in the history of Western bike civilization.

Beautiful Godzilla: Will You Go To Prom With Me? Check _ Yes _ No 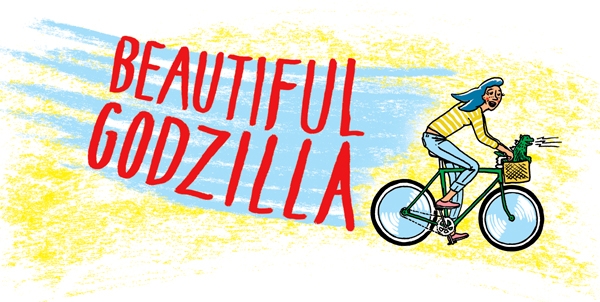 I may seem like the kind of girl who stood outside of the high school gym on prom night in overalls and a flannel shirt, picketing the school’s abstinence-only sex ed program and passing out condoms to repulsed classmates––but the angsty feminist flower in me didn’t bloom until I spent a weekend reading Sylvia Plath and discussing the socio-political effects Judy Chicago’s The Dinner Party might have had on the contemporary institution of marriage with my lesbian college roommate. Did you catch all of that? ’Cause I basically just outlined why the title of my next literary endeavor is going to be Vegan Cooking for One.

Back to fluffy pink dresses. I went to EVERY single one of my high school’s dances, AND a few at the school across town. I did all of this, mind you, while maintaining my position as editor-in-chief of the Cedar Post, competing in the regional Sterling Scholar program, studying for my AP tests and working on my Young Womanhood Recognition Award—who says nerdy, overachieving Mormon girls don’t have game? My most vivid moments of prom are pretty stereotypically Jennifer Love Hewitt-esque—except it was Utah, so all the action was over-the-jeans and in a car (or in the case of prom, over-the-cheap-sequined-folds-of-knockoff-chiffon … and in a car). I didn’t have any Carrie moments, fortunately, but I did get called a slut once by my boyfriend’s friend ’cause I was wearing a strapless dress, and I had a nightmarish hair styling experience that resulted in tears and a near-death Elizabeth Taylor updo for Junior Prom.

Then there was the anticipation, absolute horror and utmost disappointment in the whole “asking” process, which I’ve heard is also very specific to Utah in its extravagance. Guys were expected to switch their neanderthal brains for that of a sexually frustrated Relief Society President with a hot glue gun and come up with a creative way to “pop the question.” As if the basics weren’t stressful enough for both parties. You hoped you were going to get asked and were terrified you’d be the only one out of your friends without a date, but you were equally as hopeful that the chubby mouth-breather in your health class (who you were constantly running into every time you left the women’s restroom) wouldn’t get any ideas, ‘cause you wouldn’t have the heart to say no, but your gag reflex was definitely going to initiate when saying yes, and if you had to endure a day date AND every Boyz II Men track ever recorded, you’d be like, so totally bummed.

Oh yeah, so bikes. Last year—six years after my last highschool dance—fellow lady cyclist Agnes Robl and a handful of others decided Salt Lake City needed a bike prom. Jonathan Morrison of the Bicycle Collective, along with a bunch of help from some more dedicated cyclists, made it a reality. Wouldn’t you know it, the hands-down most fun dance I’ve ever been to, I attended stag. I said no to all of my suitors (and they weren’t chubby mouth-breathers, for the record), dyed my hair blue, matched my dress to my pink bike chain and danced the night away with friends and strangers after going on one of the largest, best-dressed group rides in possibly the entire history of Western bike civilization.

This year’s Bike Prom sounds like it’s going to completely surpass last year’s celebration. The Bicycle Collective is using it as their 10-year anniversary party, booking the Grand Hall at the Union Pacific Depot (by The Gateway) for June 2 (it’s Pride weekend, too!). The festivities are going to begin with a picnic, followed by what I anticipate to be an even larger and better-dressed group ride, which will wrap up at the dance. There will be a cash bar, hors d’oeuvres, some nostalgic love ballads to get down to and a photo booth provided by Anna Day Photography to help you replace all of the awkward side-hug prom photos your mom still has lining your bedroom walls at her house. I should clarify that “best-dressed” and “ride” are very loose terms––creative formal attire is encouraged, but wear whatever the fuck you want to, and the ride will be slow and casual, so don’t be intimidated, all of you non-cyclist pajama-jean wearers! The dance is restricted to those 21+, but that should give those of age adequate time to let the stressful memories of your adolescent years subside enough to give prom another chance. Don’t worry kiddies, I have a feeling this is going to be an annual event. Soon, you’ll have your chance to relive that slow dance to whatever awful prom soundtrack they’ve got playing these days, without a Book of Mormon in between you and your date. Check out bikeprom.com for more info.

Will I have a date this year? Come on guys, who do you take me for? … Aren’t nerdy, overachieving ex-Mormon girls still all
the rage?