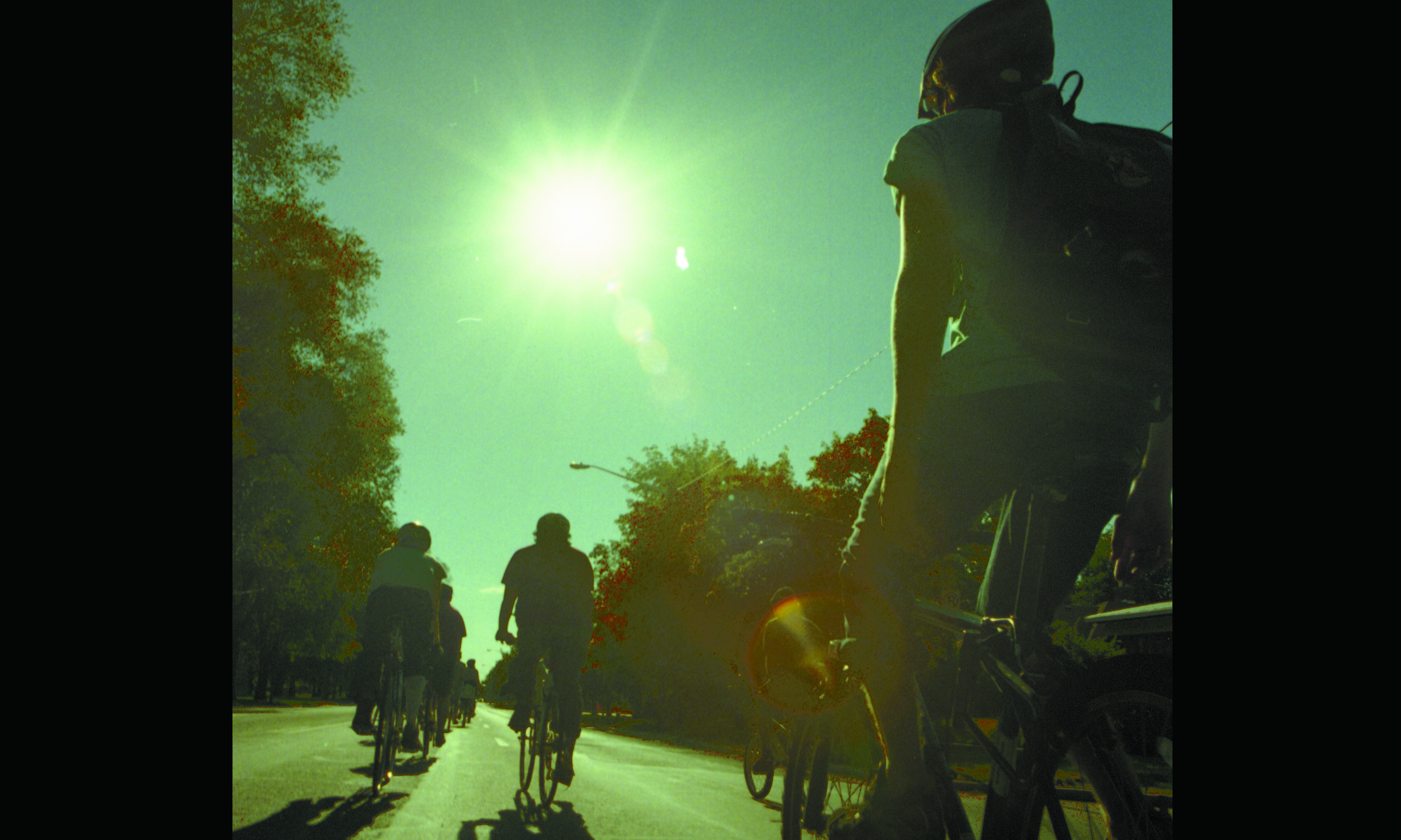 Critical Mass: Put the Fun Between Your Legs

On the last Friday of every month, cyclists all over the world take to the streets in a loosely organized celebration/protest known as Critical Mass. Safety in numbers and promoting the idea that bikes are legitimate traffic are the two key statements Critical Mass makes. The number of participants varies from month to month, anywhere from 30-100; the route is never the same and there are no leaders. In fact, the only planned element is the cyclist’s meeting place and time––in Salt Lake it’s on the north side of the Gallivan Center around 5:30p.m.

I first saw flyers for Critical Mass around town about four years ago, but didn’t participate in the ride until a few months ago. I was hesitant to attend because I wasn’t a very active bike rider and my bike wasn’t my sole form of transportation. Thankfully, a handful of years later, I finally let go of my inhibitions about being heckled by “hardcore bike riders” for driving a car. It didn’t take long to realize that my fears had been unfounded.

The first Critical Mass, originally called the Commute Clot, was held in San Francisco in September 1992. The same year Ted White released Return of the Scorcher, a short film that explored the culture of bicycles and documented a phenomenon in China. Cyclists would pile up at intersections without lights and after a large group had compiled they would go through the intersection together. The phenomenon was called a Critical Mass, and early participants of the San Francisco ride decided to change the name of their event after seeing the film.

“I wasn’t around for Critical Mass when it hit Salt Lake City, but have been informed it dwindled in and out of Salt Lake in the late nineties and didn’t take hold until the new century,” Cory Bailey, a regular participant of Salt Lake City’s Critical Mass tells me. Bailey discovered Critical Mass after seeing stickers and flyers for it around town. Bailey can’t recall when he started riding in Critical Mass but says, “I feel like I have been riding in Critical Mass my whole life.” In addition to riding regularly in the event Bailey is the group’s self-appointed bike DJ. Bailey’s bike is equipped with an iPod shuffle turned into a stereo via computer speakers and a rechargeable battery unit. The makeshift boom box provides Critical Mass participants with a soundtrack for their ride¬, and Bailey is always taking requests.

On Friday July 27, I attended my second Critical Mass. I rode to the Gallivan Center with two of my friends and waited for the group of cyclists to assemble. When I’d participated the month before my roommate and I had barely made it. We pulled into the Gallivan Center right as Critical Mass was leaving and fell in towards the back of the group. This time around I was one of the first ones there. After about an hour, when a large number of bike riders had assembled and no more seemed to be trickling in, someone made a few announcements about rides coming up. Fundraisers being held for Marty Kasteler, an active bike rider who had been intentionally hit and nearly killed by a delivery truck earlier in the summer, were the main events discussed. After that the bikes took to the streets en masse.

Someone near the front of the pack of bicyclists picked a direction and everyone followed. As we began to overtake the lanes of the road, thus becoming traffic, old school hip-hop, punk rock and even some bad 90s music blasted from Bailey’s bike stereo. As we rode past lone bikers, participants of Critical Mass yelled, “Come ride with us.” Cars began to swerve around the bikes, sometimes attempting to pass the horde we had created in the opposite lane, but more often honking at us and looking annoyed. People on the streets asked us what the hell was going on as we rode past them.

Riding as a group is an important aspect of Critical Mass which helps keep bike riders safe too. To prevent separation, a few cyclists will block traffic so anyone near the end of the pack will be able to make it through red lights and intersections. “[People] often feel that the cars are for the roadways and that everything else belongs on the sidewalk. We offer a friendly reminder that sometimes gets taken in an unfriendly way; we are not blocking traffic, we are traffic,” Bailey says.

Critical Mass avoids breaking the law by refusing to pin down an exact goal of the ride. It cannot technically be labeled as a protest and so the city needs no advance warning that it will occur. Although there is nothing illegal about riding bikes in a large group Critical Mass has still encountered some run-ins with police. “In cities where numbers have been large they [the police] have arrested, harassed and taken bicyclists’ bicycles. [The Salt Lake City police] have mostly chosen to ignore Critical Mass,” Bailey says, “However, I don’t think it is beneath the Salt Lake City police to do the same when there are greater numbers.” In July 1997 San Francisco Mayor Willie L. Brown, Jr. attempted to map out a route for Critical Mass participants with the help of police escorts. Around 5,000 riders showed up and the monthly event turned disastrous. During the ride, police corned 250 bicyclists, arrested all of them and seized their bikes—no convictions were made and Critical Mass in San Francisco continued without police escorts.

Critical Mass is largely defined by its loose organization and that the only requirement is that you bring a bike. Those two factors make it very inclusive and allow riders to make the ride their own. “We come from all different walks of life, but when we ride together in Critical Mass we become close to each other and empowered,” Bailey says.

If you own a bike and know how to ride it, it’s high time that you attend Critical Mass. The ride occurs the last Friday of every month, no matter what the weather conditions, at the Gallivan Center around 5:30p.m. Get out of your house, cut the leash from your car and go do something you won’t regret.