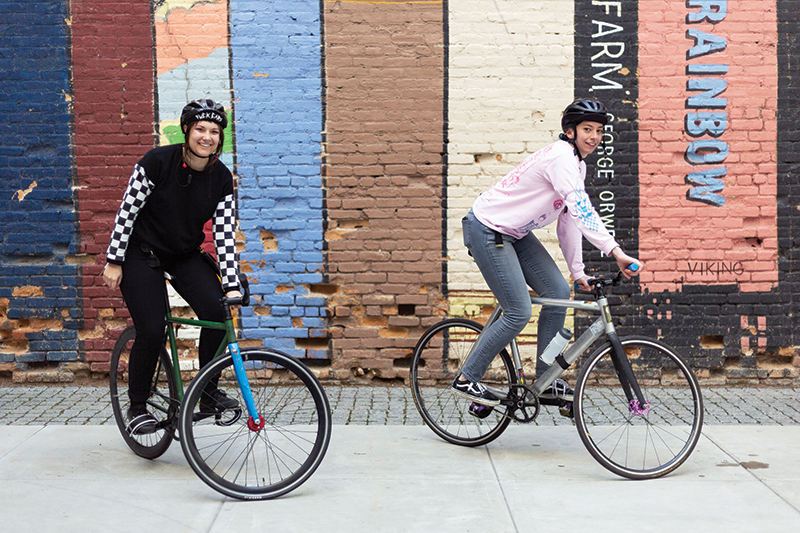 Megan Dunn and Emily Parr are cyclists who ride fixies, and they ride fast. “There’s something about it—not having brakes and stuff,” Dunn says. “It’s kind of scary, but it’s kind of fun. You only have yourself to control and stop your bike.” The two connected over their shared love of intense cycling. “Megan and I like to ride hard,” Parr says. “We like to mash, and we like to go fast and push each other to do cooler things and be a better biker and get stronger.” They joked that they were “inappropriate boys,” a nickname that lent itself to their group, Inappropriate Boys Club (@inappropriate.boys.club on Instagram), which they started last fall to showcase their moves and publicize the races they put on.

The duo got into biking separately. Parr says, “It was just like a way to get out of the house, you know?” Dunn grew up in Salt Lake City and got around via bike in high school. “It wasn’t very nice. It was pretty shitty, and I ate shit a lot,” she says of her biking at the time. She started working at Specialized after she graduated and then got her first single-speed bike. Both slowly got more into biking, entering races and upgrading their bikes one part at a time. Eventually, they met doing sandwich bike delivery at Jimmy John’s. Of that job, at which both women still work at least occasionally, Parr says, “You’re forced to bike for hours at a time, and you can’t stop. It just builds you up.”

Women are often few and far between in the bike groups the pair hang out with, such as FOAD and 3Bs Collective, longtime fixtures in the SLC freestyle scene. “It’s been an adventure, being one of the only girls in the bike scene,” Dunn says. “I like to be competitive and bike and race really fast, so most of the people I’ve biked with are guys.” Step into those groups, and you’ll usually find a bunch of long-haired dudes; a pile of shiny, dinged-up, heavily modified bikes; beer; blood and lots of burritos. Dunn and Parr agree that if you want to ride, gender doesn’t matter. “We ride because we like to fucking ride. And it’s not about being a girl,” Parr says. But she also notes that “biking is super boys’-club shit sometimes.”

“Starting is the hardest part. Because it seems overwhelming, but everyone just needs to realize you learn things by just learning little pieces, here and there.”

Breaking that stereotype is at least part of the reason they started IBC, which hosted its first race in February—an out-and-back, all-gender ride called 14 Shots to the Dome that ended up being 12 shots (of pickle juice tomato juice, apple-cider vinegar, kale-celery juice and shitty vodka) and 35 miles. Three people dropped out. Both Dunn and Parr finished. “I think a lot of girls are taught that being competitive is bad,” Parr says, “or they’re afraid to be slow at first.” She acknowledges that getting into biking was intimidating for her, too. “I think a lot of girls want to do it, but it’s hard to know where to start.”

For the duo, the recipe to getting started—and getting better—is simple: “It’s about riding as hard as you fucking can. The more you ride, the better you get. That’s how you get better, is just by doing it,” Parr says. Women-friendly spaces like WTF (women, trans, femme) Nights at the Bike Collective have been an invaluable resource for both women. Other events—like Beehive Bike Polo’s WTF–only nights—make biking more accessible to women and nonbinary people in SLC, especially newcomers. “Starting is the hardest part. Because it seems overwhelming, but everyone just needs to realize you learn things by just learning little pieces, here and there.” In the WTFNB-only vein, Dunn has been trying to convince a friend to put on an all-ladies alleycat race, though IBC may end up hosting it later this year.

“The best thing about crashing is I don’t give a fuck.”

Making an Instagram account, shooting videos, joining group rides—all of this creates visibility in the online and real-life fixie community and helps other WTFNB people know, “Hey, we’re here and we’re killing it, too!” Dunn and Parr placed sixth and eighth, respectively, in a recent 3Bs alleycat race. Dunn says her goal this year is get first overall in a race: “I’ve been preparing a long time for this,” she says. Parr refers to it as “next-level shit,” meaning winning first, not just in the women’s category, but overall. The two say it’s hard to get that strong, but not impossible. All you have to do is keep riding. “I was just keeping up for a long time, and now I’m passing everyone, which is a really cool feeling,” Dunn says. “It’s been fun to be a girl and be able to keep up because girls are fast, too!”

For both women, biking is everything. It’s a means of self-sufficiency (riding through blizzards will do that to you). It’s a family and a community of fellow weirdos to rely on. It’s a way of life: “Being a little bit sweaty all the time, and sneakers, and endless amounts of jackets and layers and stuff, backpacks—only bikers get it,” Dunn says. It’s a sense of resiliency: “The best thing about crashing is I don’t give a fuck,” Parr says. It’s a space where they and other women can be themselves. Because, really, they’re here to “just fucking ride.” Dunn and Parr aren’t sure what IBC will ultimately become—but keep an eye on their Instagram page for new videos and notifications of upcoming rides and races.