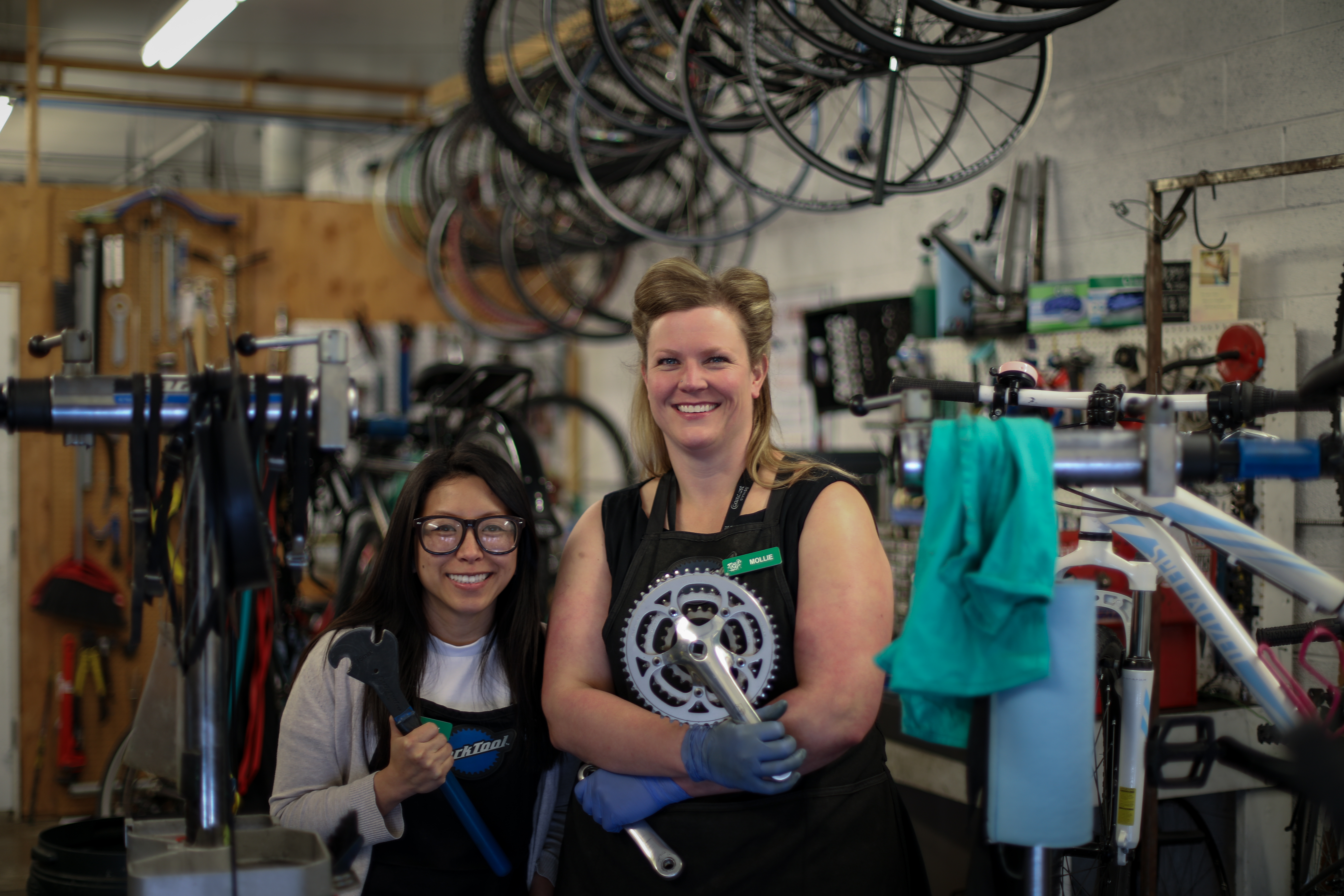 “Go into any bike shop around town, and you’re going to find that almost everyone in there is male,” says Salt Lake City Bicycle Collective (SLCBC) Head Mechanic Mollie Bourdos, propped atop a weathered workbench surrounded by cycles in varying stages of deconstruction. “We’re starting to see more, but all of the advertisement is targeted towards men, even product names.” Bourdos half-winks in acknowledgment of the array of covert and explicit fashions in which cis-masculinity remains the dominant norm in her industry. The shift from this culture toward an increasingly gender-diverse presence is a somewhat recent phenomenon, to which Program Coordinator Amy Wiscombe can attest: “Even since I’ve been at the Collective the last 11 months, talking to a lot of people coming to WTF Night, I’ve realized, in that short amount of time, it’s been shifting.”

WTF is the SLCBC’s weekly women-, trans- and femme-affirmative offering. Every Wednesday, the shop closes to regular business and opens to anyone who identifies on the WTF spectrum, with a loving yet firm reminder to cis-male-identified patrons to please make space for these oft underrepresented customers. The program welcomes all skill levels, supporting bike-loving clients as well as newcomers. Individuals can come and work on their bikes, receive mentorship in the process and purchase needed supplies. The program also supports members joining local races and bike-related community events.

WTF is a national initiative, with SLCBC’s program modeled off those from Portland’s Community Cycling Center and San Francisco’s Bike Kitchen. The program started through a single grant, meant to cover merely one year. Yet, the SLCBC has invested itself to keeping the program alive long after the money ran out. “As there’s need to fill, we work really hard to fill it,” Bourdos says, having seen WTF continue for her two-plus years on hand. “We always need funding for any of our programs, but this one gets overlooked. Any kind of funding, outreach, even helping set up rides for this group … and obviously, volunteers. We’ll teach you; we’ll take you in.” With warmer months ahead, WTF’s offerings are expanding. “We are starting a bi-monthly WTF group ride to break down any fears or concerns WTF riders may have when riding in SLC,” says Wiscombe. “We would like to incorporate pit stops at bars and restaurants because, for some WTF riders, those kinds of spaces can feel overwhelming. However, if you have a group of WTF supporters with you, it makes things fun and less intimidating!”

Volunteers are the lifeblood of WTF, whether they enter as cycling dynamos and mechanical magicians or curious greenhorns. As full-time staff, Wiscombe attests to labor-balance issues as a woman working at the collective: “Because it is such a male-dominated space, those of us that are female-identified are expected to stay late and work WTF Night,” she says. “If volunteers would like to host a night, that would be great!” Bourdos chimes in, nodding in agreement: “Since we don’t have a lot of female representation, it’s always nice to have more help.” Bourdos’ role as head mechanic is demanding, involving leadership, customer service and mechanical workload. As we dialogue about her role at the shop, a knock on the door and a voice calling her name briefly manifests her struggle. “We still have a need for a lot of volunteers and people-helping,” she says. Wiscombe answers the door and asks for patience from the visitor, returning to her seat to echo her colleague’s sentiment. “Sometimes we don’t make any money because we just don’t have a lot of folks show up,” she says. “Tonight, there’s a lot of people out there; that’s really great. It’s just a challenge, the consistency.”

More new faces have flooded in as of late, including those who are wholly new to the bike culture. “There’s a lot of empowerment people see when they come into the shop and they feel more comfortable and confident,” Wiscombe says. Bourdos proudly adds, “Everyone who stays for even an hour leaves feeling better about themselves. We’re always working on building people up.”

The future of WTF Night may be a bit tenuous at times, but the vision is brave, and the women who staff it are bold and creative. Recent collaborations with the Latina Bike Initiative have led Wiscombe down the path of greater outreach. “I feel like there’s a need for more women of color, and I know it can be an intimidating space for those who identify,” she says. “I also want to see more female-identified youth. We have a robust youth program, but 90 percent are male-identified. I want to support a greater trans and female junior bicycle initiative.” Bourdos brings a thoughtful challenge: “I don’t think there should be such a wide gap such that other [non-cis-male] individuals don’t feel welcome,” she says. “I want to level the playing field. That would be my goal for this program … to the point that it’s no longer needed—when you can go into a bike shop any time and see every kind of person feeling comfortable asking for what they need!”

SLCBC’s WTF Night occurs Wednesday evenings from 5:30–8:30 p.m. at the shop on 2312 S. West Temple. Women, trans and femme-identified individuals, including interested volunteers, are welcome. Allies are asked to respect the space and visit the shop during standard business hours. Bi-monthly rides are announced via social media (Facebook: @BicycleCollective).