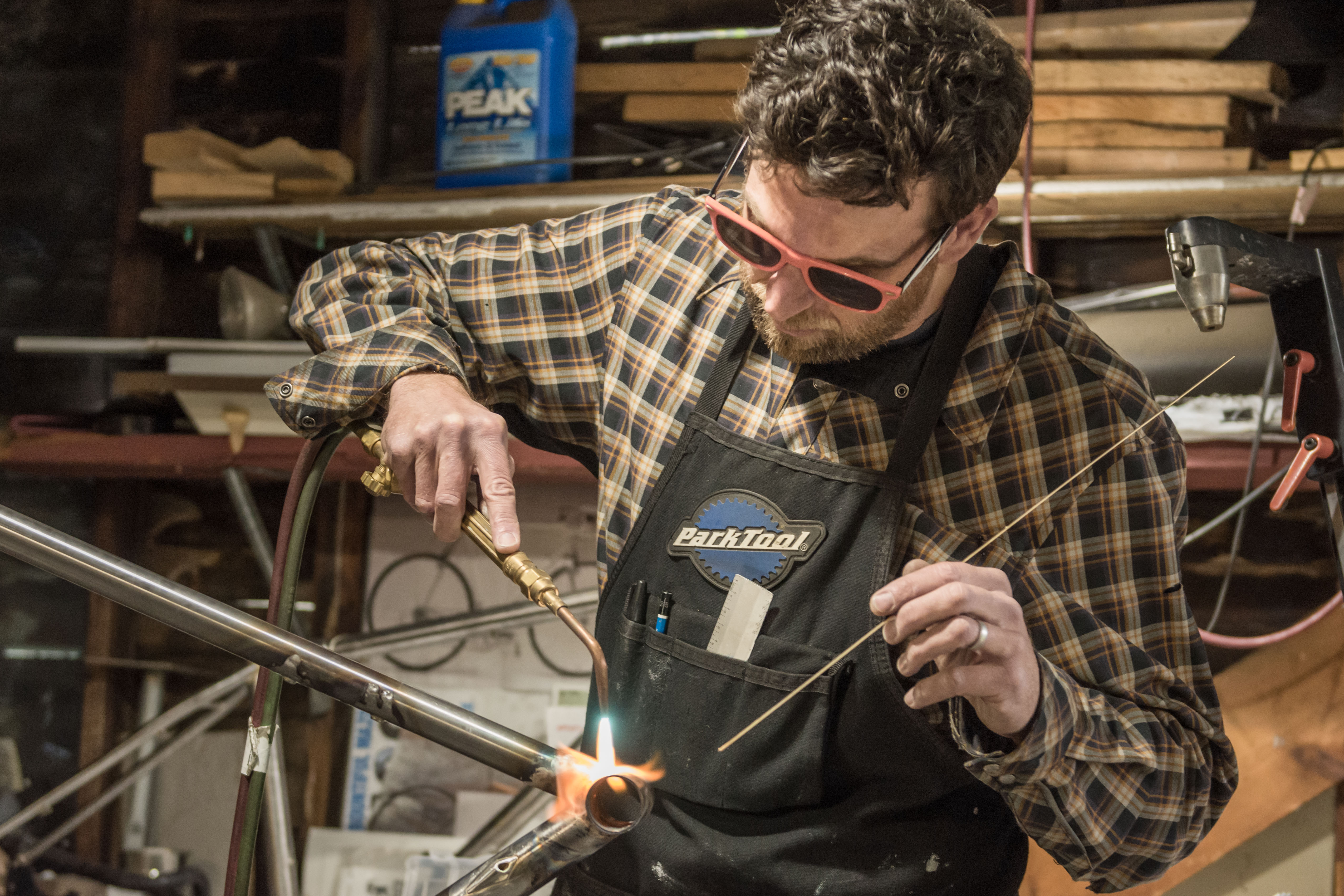 SLUG: SLUG writer Jordan Deveraux highlighted SaltAir Cycles in last May’s Bike Issue, and we learned a bit about your background.  We are still curious about how you moved from architecture to frame building and what parallels exist between the two. Could you please elaborate?
SaltAir Cycles: Practicing architecture for two decades had led me to a place in my career where I had to make a decision to either continue climbing the ranks of a corporate firm as a project manager or follow my heart to becoming a small independent bicycle constructeur. It was becoming harder for me to envision the next 35 years behind a desk, staring at a computer and having a job description that felt like “assistant problem solver.” It was a far cry from the creativity and artistry that drew me into studying architecture in the first place. The process of designing and building bicycles had become much more engaging and offered the opportunity for me to forge my own path and grow my brand to its full potential. There are parallels between bicycle framebuilding and practicing architecture—the final product seeks to be both highly functional and aesthetically provocative. As the builder, I get to experience the making of the product by my own hands and ensure that the final outcome is in accordance with my vision.

SLUG: Tell us a bit about your shop space and how it suits your particular design process.
SaltAir: My workshop is a bit rustic, to say the least. It’s dimly lit, freezing in the winter and scorching in the summer. At the moment, the space and location, at the back of my residential property, is dictated more by convenience and budget. As my brand grows, I hope to upgrade the space to something more suitable.

SLUG: As a builder, what challenges you most, and are there constants project to project?
SaltAir: I approach each new frame with the goal to improve upon the last one that left the shop. That is the challenge for me—to make each one just a little bit better, building upon the experience of the last. The process of building a bike, starting from a pile of steel tubes, lugs and some machined parts, to a fully functioning bicycle that can carry its rider swiftly to other destinations under the power of his/her own pedal stroke is quite a transformation. It’s a process of measuring, cutting, filing, brazing and shaping to make the best frame I can make. The constant from frame to frame is that each one needs to be true to its centerline. In other words, if it’s not a straight frame, it isn’t very functional.

SLUG: How does your local connection to SLC improve your work?
SaltAir: I can’t say for certain that having a local connection to SLC improves my work. I can say, however, that the brand I’ve built and the character of my frames is uniquely rooted here. My builds are influenced by the folks I ride and race with and the types of climatic conditions shaped by cycling in this region. The majority of my customers to this point are cyclists I ride with, which means my work benefits from the personal feedback I receive from them—grassroots R&D, I suppose.

SLUG: Would you briefly describe your perspective on the SLC cycling community?
SaltAir: Yeah, the SLC cycling community is amazing—it’s a very broad spectrum, from the hardcore, year-round, cycling commuters to the ultra-competitive racers and every type in between. There is a strong advocacy movement that has made great strides in presenting SLC as a top contender for “Bike Friendly Cities,” and we are all benefitting from the infrastructure that has resulted over the last decade. I’m pretty excited about that and look forward to it only getting better.

SLUG: How does Utah stack up as a state when it comes to a venue for handmade bicycle builders?
SaltAir: I guess I’m surprised that Utah doesn’t have many small frame builders. With all the cycling that occurs in this state, its a wonder to me that there aren’t more. In perspective, I suppose it is a relatively smaller market (population-wise) when compared to Oregon, Colorado and California, where a great deal of small frame builders seem to hail from in the West. I have a feeling that 10 years from now, there will be a resurgence here in Utah.

SLUG: What innovations in the cycling industry are most appealing to you at this time?
SaltAir: Off the cuff, my perception is that the bike industry keeps pushing innovations that don’t necessarily improve the experience of riding a bicycle, and that which is driving these developments is motivated by selling more product. Not to say that there aren’t a handful of exciting new offerings out there, but it appears to me that this has become the MO of the industry at large. I will say this: The “drop stop” or “no drop” chainring and clutch derailleur systems do make racing cyclocross in Northern Utah a whole lot better. It’s a bigger benefit than changing your rim brake cantilevers to disc. That’s right, I said it!

SLUG: Which builders out there do you draw inspiration from, and how do you engage with them?
SaltAir: I’m excited to say I finally got to meet Dave Kirk (Kirk Frameworks of Bozeman, Montana) at this year’s show. His fillet brazing work has been the benchmark for which I aspire to have my fillets measured. I went to the ENVE HQ Open House the Wednesday evening before the show and was introduced to Sacha White (Speedvagen/Vanilla Workshop of Portland, Oregon). Seeing examples of his work with his brands near the end of the last decade was a defining inspiration, which got me into frame building. I’ve reached out to Rob English by email to learn a few of his tricks, and he was very open to imparting his knowledge. Richard Sachs has been very supportive over the years, as I’ve ordered lugs and his own proprietary Columbus tubing from him—he always sends a little something extra when I place an order. I’d be remiss if I didn’t mention Joseph Ahearne, who was my instructor at UBI—although he wasn’t exhibiting at this year’s show, he was in attendance, and it was good to briefly catch up with him. Another highlight was being congratulated by Mark DiNucci after accepting the “Best New Builder” award—DiNucci is a straight-up OG of American frame building!

SLUG: If you could find a way to work with any material for frame construction, what would it be?
SaltAir: Steel. In my book, it’s as good as it gets. I know a lot of folks will “poo-poo” that answer, but it’s such a versatile and easy-to-work-with material—there’s a reason that the majority of bikes ever created are steel. ’Nuff said. … Oh, and stainless steel.

SLUG: The 2017 NAHBS was held in SLC. How did it feel to attend the show on your home turf?
SaltAir: Honestly, it was an incredibly timely thing to happen for me. I’m definitely at a point where I need a boost in orders, and for NAHBS to come to Salt Lake was probably the single biggest opportunity I could wish for. Once I registered as an exhibitor, I knew I had to make the most of it. Obviously, I had the advantage of extra time and no added expense, not having to travel, so it was a no-excuses proposition—I just had to focus and deliver.

SLUG: This also marked a historic moment for SaltAir Cycles, as you took home a win.  Which categories were you entered in, and what emotions were associated with the victory?
SaltAir: Yeah—I still can’t believe it. There was some impressive work on display from the all the “New Builders” this year. Technically, I was automatically entered into the competition for “Best New Builder,” as were all “New Builder” exhibitors (first-timers). I had entered the Di2 Purple Road Racer into the “Best Columbus” (Columbus Tubing) build category and had a Lugged Disc Randonneur (exhibited in the TRP Booth), decked out in Campagnolo Record 11 drivetrain, so that went into the “Best Campy” build category. I really never felt I was in the running for “Best New Builder” until I noticed the two judges stopping back in front of my table, together (from a distance), and whispering back and forth. Once I had observed that, I thought perhaps I was a contender. It wasn’t until the end of the day when I was watching the final awards ceremony and I got tapped on the shoulder from behind and asked to go get my bike from my table that it hit me. I couldn’t believe it—nervous excitement, elation, but most of all … validation. That’s probably the emotion I feel strongest, based on the fact that the community of industry experts deemed me “Best New Builder.”

SLUG: What do you think you did that secured a victory for yourself and your build?
Saltair: As a “New Builder” exhibitor, we were judged on the one bicycle and frame set we were permitted to display at our tables. I had the Road Racer, painted in a pearlescent lilac by Spectrum Powderworks and all decked out in ENVE glory from Fairwheel Bikes with streamlined/minimal electronic shifting cables and a stealthy, integrated seatmast. It looked incredible and got quite a bit of attention. The frame set I displayed was a fillet-brazed bike-packing rig with S&S Couplers for breaking down and packing in a suitcase. It had a segmented fork with internal brake cable routing and spaced for a 135mm disc hub. As a late-coming change to my preparations leading up to the show, I opted to leave the frame set unpainted and in the raw, showing what the fillet joints looked like naked and exposed. In hindsight, that probably helped set me apart as a new builder.

SLUG: How will you use this momentum to continue honing your craft and attracting clients?
SaltAir: Yeah, I’m riding the wave of media coverage all over the internets and taking a moment to improve my website before I plunge back into the shop and starting the next build, post-NAHBS. The experience has charged me up and inspired me to build some amazing bikes going forward. I’m already in the planning stages for some upcoming opportunities to exhibit my work, such as the Build Fest at the Leonardo Museum in late May.