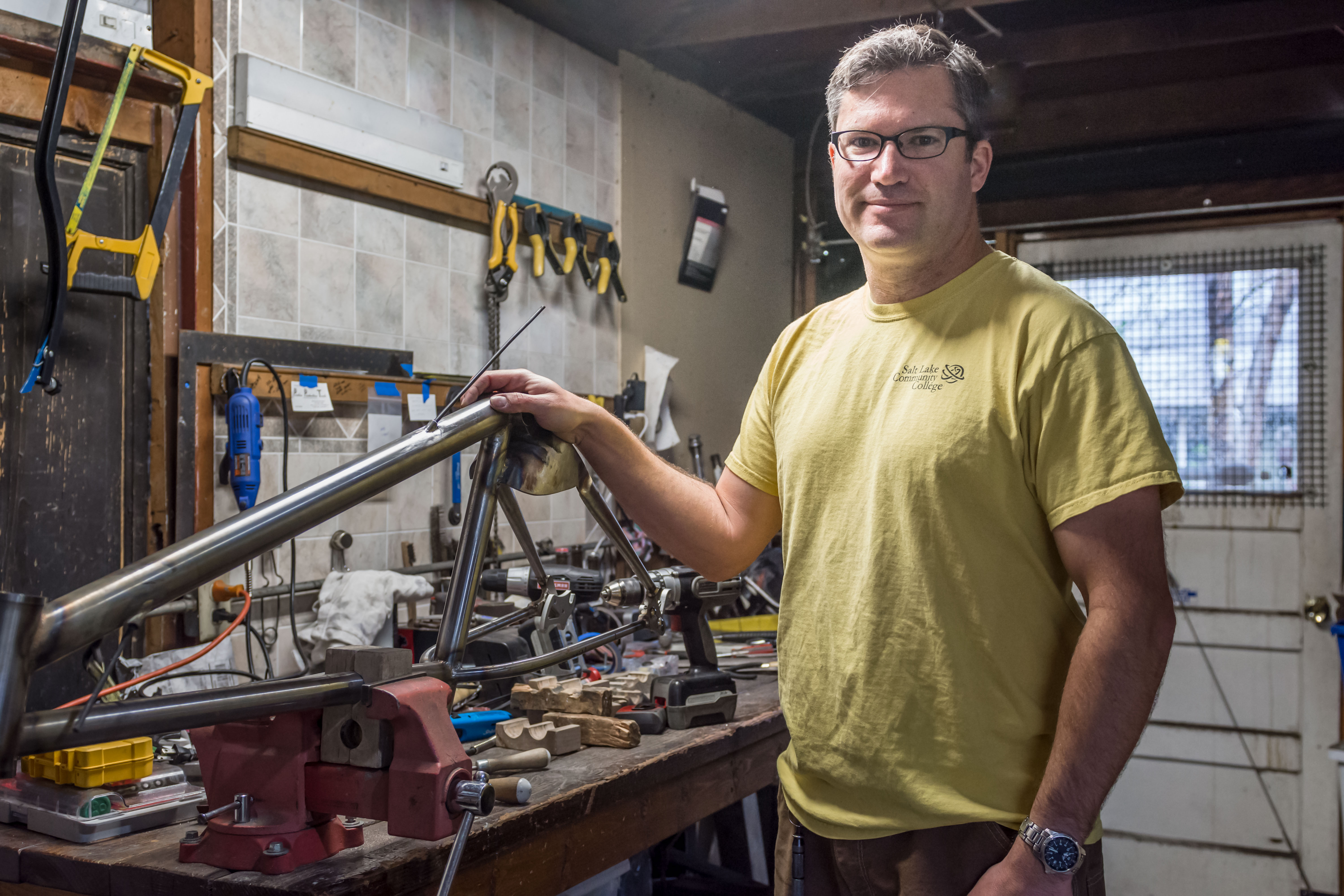 SLUG: Briefly describe the backstory behind your brand. Why did you decide to choose Salt Lake City as your home base?
Sixth Law Cycles : I’m a corporate refugee. While I’ve been a “bike guy” for a long time, I was a rider and tinkerer, not a builder. I flirted with the idea of making bikes many years ago in school, but then settled into a regular corporate job. Sure, I was the weird one who rode a bike through summer and winter, but once I changed my clothes, I was like everyone else in the office. I enjoyed making things, but my outlet was glassblowing, which I did a few times a year at a local public access studio.

Then one day, my wife got a call from the University of Utah. They were looking for someone to come out here and do some pretty cool new stuff. Rachel grew up in Santa Fe, and I spent lots of summers on the eastern slope of the Sierras in Northern California, so the Mountain West was comforting and familiar to us. In 2014, we packed up our house in Pittsburgh and headed west. That meant that I had to part ways with an employer I’d had for more than a decade. When I started looking for a new job, everyone asked, “So what would you do if you could do anything?” One day, I decided that I would build bicycles. I had lunch with Matthew Nelson [of Saltair Cycles], who told me about his journey into bike building. I went home, had a long conversation with my wife, and made arrangements to attend bike-building school (and later welding school). In almost no time, I went from being a guy who likes and rides bikes to being a guy who makes them.

SLUG: How do you engage with the local cycling community in SLC?
Sixth Law Cycles: I’m a totally anonymous member of the cycling community here. I shouldn’t be—it would be better for business if more people knew who I was. But I’m fundamentally an introvert, so my interaction with the local community consists of being more respectful of cyclists than most when I’m driving a car, and being just another black helmet on the streets when I’m on my bike.

SLUG: How many people work within your company and how do you plan to grow your business?
Sixth Law Cycles: Right now, I am Sixth Law Cycles. I aspire to put people to work some day, but that’s a long-term goal. For now, I am working to get as many bikes with my logo on the road as I can. Along the way, I try to engage as many local resources as I can. The community around bike building is really remarkable. In the process of building my last bike, for example, I hired a local rack maker to build a custom rack for me (Peter Barrett, Carrion Cargo), a local bag maker to sew the panniers (Drew von Lintel, Spinner17), an artisan woodworker in Bend, Oregon, to make fenders (Cody Davis, Woody’s Fenders), a local machinist to help fabricate some custom tooling (Dylan Neyme) and a local company that makes wheels (Chris Modrigan, Mercury Cycling in Ogden). And that does not include the small companies that I sourced parts from (White Industries, Nova Cycles Supply, Framebuilder Supply, Ahearne Cycles, King Cage, Spurcycle, Paragon Machine Works). I’ve met almost all of these people in person. I don’t own anything else that intimately involves this many people who are part of my community.

SLUG: What is the most difficult part of building a bicycle or components by hand?
Sixth Law Cycles: For me, the most difficult thing is checking my ambition. I don’t have fancy tools or precision equipment. I work with modest hand tools, mostly files and saws. But I have visions of making lots of awesome stuff. Sometimes, I’ll spend hours or days making a tiny trim piece from scratch. I really have no profit margin on the bikes I build, even under the best of circumstances. A two-day diversion to make cool cable routing bits makes earning a living that much harder. On the other hand, my bikes wouldn’t be the same without the little touches that set them apart from the offerings at your local bike shop. In the end, it’s worth it, but I have to be careful about how much I plan for each project.

SLUG: What have been some of your biggest triumphs as a builder?
Sixth Law Cycles: My biggest triumphs are, without a doubt, the smiles on the faces of the people who ride my bikes. That’s what it’s all about, in the end. Seeing the delight in the eyes of customers makes the whole thing worth it.

SLUG: How do you attract potential customers?
Sixth Law Cycles: This is hard. First, I am not naturally outgoing. I knew before I started that I am not a good sales guy. I’m passionate about my work and can talk about it for hours, but put me in front of a stranger, and I tend to shut down. My strategy is to deliver so much value to my customers that they become my sales force. When people who ride my bikes go out and engage their friends with a very positive story, it does much more than any sales pitch that I could ever hope to make.

SLUG: How do you set yourself apart from other custom builders in the area and abroad?
Sixth Law Cycles: I tend to build bikes that are a bit quirky. I use materials that are a little unusual in the industry. For example, I used a piece of rectangular tubing for the chainstay yoke that I built for the cruiser. I like to solve problems in unusual ways. In the end, however, none of that matters—there are tons of awesome builders out there who make extraordinary bikes. The reason to buy a bike from me is the experience of buying the bike. My customers and I need to have some sort of connection, something to bond over. These projects are deeply personal to me; they’re not just transactions. I meet some people and establish a deep rapport. Those are the people who will buy a bike from me. If you don’t feel the magic when you talk to me, your dream bike will probably be built by someone else.

SLUG: Tell us about your 2017 NAHBS experience.  Was it your first show, or have you been going for a while?
Sixth Law Cycles: I attended NAHBS last year as I was just getting the business up and running. This was the first year I exhibited bikes at the show. It’s an amazing place to be a bike guy. At the same time, it can be overwhelming. The whole place is full of absolutely amazing work. It’s how car enthusiasts feel at a custom hot rod show, or maybe how people feel at Outdoor Retailer. It’s a truly incredible show. No matter how many times I walked around the floor, I always found something new that I didn’t see before. I see new things even looking at pictures from the show. The people I spoke with were very positive about my work. It was gratifying—and exhausting.

SLUG: What kind of processes do you use to build your frames, and why does that particular method suit your business?
Sixth Law Cycles: I use hand methods to build my bikes. Whether it’s files, saws, oxyacetylene or TIG, the tools in my shop are wielded by my own hands. I choose the tool that gets the job done the best. “Best” is a subjective term. Sometimes the aesthetics drive a technique. Other times,  I just do what I’m good at. I don’t have the volume to support a large workshop or fancy tools at this point. I do some things by hand that I would rather do with a power tool, but I’d be out of business in a hurry if I spent the money on every tool I’d like to have. Building by hand keeps me intimate with my work, though. Even with an unlimited budget, I would not find it fulfilling to program a bunch of robots to do the process for me.

SLUG: Who are the builders out there that you draw inspiration from, and how do you engage with them?
Sixth Law Cycles: Someday, I’d like to build bikes like James Bleakley of Black Sheep Bikes. His pieces are equally at home rolling down the road or hanging in a museum. I’m far too shy to actually talk to him, but his sense of style just blows me away.

It’s funny—I recently set up an Instagram account, and my eyes have been opened by the number of small builders out there, filling tubes in their garages. I have a huge amount of respect for all of them. If you’ve got the passion to build a bike with your own hands, I am drawing inspiration from you.

SLUG: Are there certain styles of bikes that you prefer to build?
Sixth Law Cycles: I am ambivalent about style. I strongly prefer to build unique bikes, however. I want every bike to be a little different. I try to design things in ways that stand out from the crowd. I want people to go out and show off their bikes. I think that’s easier to do when you have something that no one else has.

SLUG: What are the most challenging parts of the overall build process and how do you overcome them?
Sixth Law Cycles: Before starting the build, there are so many choices to make. Sometimes, cutting the first tube is the hardest part. Once you start on the bike, you become more and more constrained. In some ways, the process gets easier as you go along. I think of it as inertia. It takes a lot of energy to get going, but once you are working, it takes a lot of energy to stop. I sometimes have to shuffle around the shop for a few hours before I drill the first hole or cut the first tube. Sometimes I will do a practice project first, just to make the first bit of mess to disrupt the dust on the bench.

SLUG: If you could find a way to work with any material for frame construction, what would it be?
Sixth Law Cycles: I’d like to be able to work with wood. There were some stunning wood bikes at NAHBS. I will not give up metal, but the look of some of the wood frames was simply gorgeous. A hybrid design would be phenomenal. And to get really out of bounds, I would like to find a way to incorporate glass into the design.