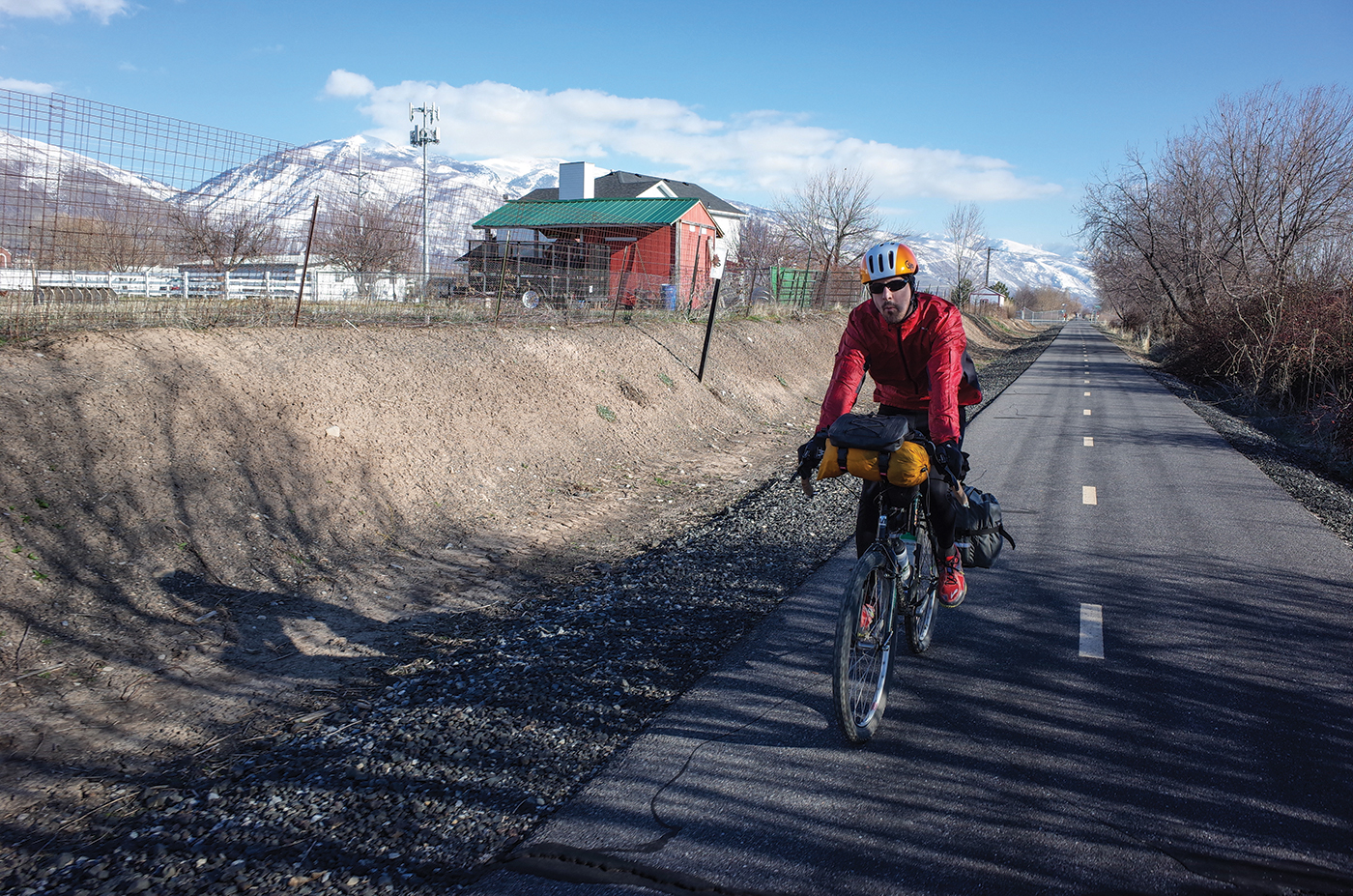 A Hundred Miles Along the Wasatch Front: Riding the Golden Spoke Trail Network

In June of 2018, a bicycle-path network from Provo to Ogden running over 100 miles, was finally completed with the construction of the Jordan River Bridge in Salt Lake City. The first annual Golden Spoke Ride consisted of two groups, one leaving from Rainbow Gardens in Ogden Canyon and cycling 47 miles to the Jordan River Bridge and another group leaving from Bridal Veil Falls in Provo Canyon and cycling 57 miles. Many other smaller groups joined at various points along the way. The Golden Spoke ride network of multi-use paths includes the Provo River Parkway and Murdcok Canal Trails in Utah County, the Jordan River Trail in Utah and Salt Lake Counties, the Legacy Trail in Salt Lake and Davis County, and the Denver and Rio Grande Western Rail Trail and Ogden River Parkway trails that lie in Davis and Weber County.

Generally, these bike paths are well-paved, well-marked, have few hills and pass through a variety of terrain, from residential neighborhoods and open areas to wooded, forest-like sections. These bicycle trails have abundant spur and feeder trails that link many areas along the Wasatch Front. They run through neighborhoods, parks and scenic areas offering a variety of other activities, such as fishing, picnicking, camping, bird-watching and so on. On weekends, the trails can be crowded, but at least you don’t have to deal with cars.

I’ve been riding bikes my whole life—road bikes, mountain bikes, commuters, fat bikes, tandems, you name it. I’ve been commuting by bike since 1984, and I’m a core volunteer at the Provo Bicycle Collective. From experience, I know that cyclists don’t like cars, traffic or busy intersections. A dedicated bike path eliminates all of that and allows a cyclist to pedal without the stress of traffic. We are fortunate in Utah to have this excellent network of bike paths.

“We passed a guy pulling a loaded bike trailer. When we asked what’s in the trailer, he said, ‘There’s a party at the end, right?'”

Over the years, I have ridden these bike paths on a regular basis: Saturday-morning fitness rides up Provo Canyon and the Alpine Loop, leisurely rides down to Utah Lake, overnight bike-camping trips on Antelope Island via the Denver and Rio Grande Western Rail Trail, and regular rides to Salt Lake City, where I sometimes crash at my daughter’s apartment then take the Frontrunner home the next day.

The Narrows is the most interesting part of the route from Provo to Salt Lake City, a mini-canyon cutting through a finger of the Wasatch Range that extends down from the Lone Peak Wilderness Area to the East. After leaving Thanksgiving Point, the Jordan River Trail drops down to the Jordan River, crosses a bridge, then begins a steep but short ascent up into the Jordan Narrows. In participating in the Golden Spoke Ride, as we shifted into granny gears, we passed a guy pulling a loaded bike trailer. When we asked what’s in the trailer, he said, “There’s a party at the end, right?”

Lars and Connor, teens on their high school mountain bike team, easily pulled ahead and out of the saddle like it was a race, while my brother Jason and sister-in-law Natalie Christensen and I put our heads down and grinded to the top. A warm, spring sun and clear-blue sky propelled us along. We, along with many others, were celebrating the completion of the 100-plus mile network of continuous bike paths. It was a festive atmosphere with aid stations scattered along the way of the trail, usually at one of the many city parks along the way, offering food, drink and swag. The participants were all over the map, from lean, lycra-clad, carbon-fibered racing machines to grandmas on beach cruisers and everything in between.

“We, along with many others, were celebrating the completion of the 100-plus mile network of continuous bike paths.”

After about 55 miles, we pulled up at Fisher Mansion in Salt Lake City, just south of the Jordan River Bridge, and the party was in full swing. A band played, food trucks lined the street, people were milling about and the grass area was covered with picnickers. We picked up a fluorescent-green Golden Spoke T-shirt, our reward for our efforts, grabbed some food and found a spot on the grass. Our legs felt a bit like Jell-O, but we were all grins, satisfied with our ride.

A year later in 2019, 12 other cyclists and I pedaled north on the Murdock Canal Trail headed for Willow Park in Lehi. It was our annual Provo Bicycle Collective May Campout. We’re mostly bike nerds who work or volunteer at the Collective. The conversation revolved around bikes, components, bikepacking bags, epic trips taken and those planned. We slept out under the stars a stone’s throw from the Jordan River. The next morning, May 11, was the Second Annual Golden Spoke ride, so my brother and I packed up and rode to Salt Lake on the Jordan River Trail as part of the celebration. It was a little tougher that year since we were on loaded bikes, but it was a nice way to finish our weekend ride. The Frontrunner train took us home.

Utah’s Golden Spoke Ride trail network is a great place to ride, and the next Golden Spoke Ride is presently projected to happen Sept. 19, 2020. Pack a picnic, swing a leg over your bike, head out to the bike path nearest you and enjoy a good ride in the outdoors.