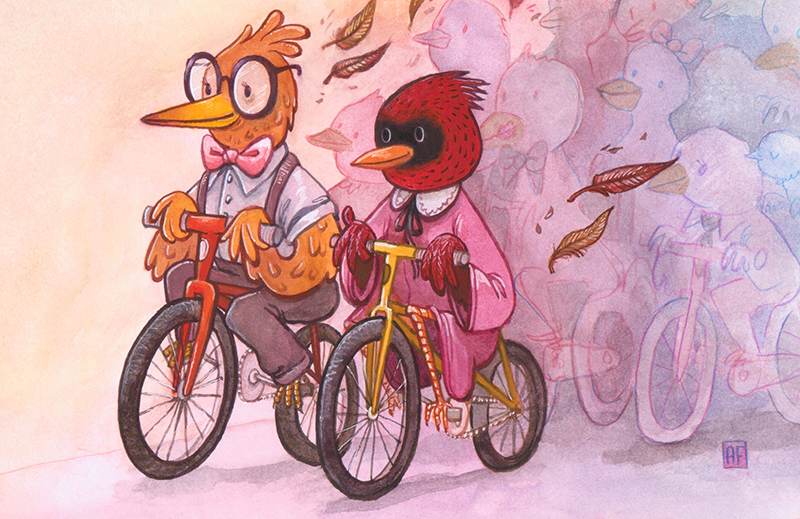 Every day, our wacky spring weather becomes a little more spring-like as our unpredictable storms finally subside. For many of us around the valley, seeing buds on the trees and clear streets means it’s time to get our bikes out from behind the ski gear, pump up the tires and put rubber to road. The Salt Lake Bicycle Collective is gearing up to welcome this season’s riders eager to tune up their bikes and make them look pretty again. But those interested in the Bike Collective and their mission to support Salt Lake City’s cycling community should be thinking about more than shiny spokes and glowing reflectors. I’m talking about bow ties, dress shoes and frilly, flowing dresses. I’m talking corsages, up-do’s and your best dance moves. I’m talking prom. Bike Prom. And this year, it is moving to Tracy Aviary.

“We’re trying out the [Tracy Aviary] this year for a handful of reasons, but mostly because the [Tracy Aviary] is amazing and the idea of partying with the birds was too cool to pass up,” Sean Murphy says about the move. “We’re out here to raise awareness for bikes on our roadways and to have a good time, but our bottom line is about who we serve. It’s always about who we serve. So, while there are now dozens of rad places to rent space for a big party, for the sake of our mission and the people we serve, we’ve got to strike that balance between awesomeness and affordability. And the Tracy has been a blessing in helping us do so.”

“[The Salt Lake Bicycle Collective aims] to encourage bicycling as a means of transportation, not just recreation and leisure.”

After 16 years, the origins of Bike Prom are unclear [see Editor’s note below for the origins], but Bike Collective board member Shelley Reynolds guesses that it was “probably in an extra-greasy corner of the Collective, or a wild idea from an amazing volunteer or staff while on a bike ride.” What they do know for sure is that “it is a way for bike riders to announce, ‘We’re here!’ to the city, and it’s steadily grown into one of the most beloved events of the summer,” says Murphy.

In addition to helping raise funds for the Collective’s educational and community programs, Reynolds says that they hold this event “to encourage bicycling as a means of transportation, not just recreation and leisure.” It is also an excellent opportunity to help bring more awareness to our cycling community sharing the roads, as a group of well-dressed cyclists can be quite eye-catching.

Reynolds says that riders can expect “a leisurely ride through Sugar House, creative outfits ranging from various eras and themes, meeting a ton of people that enjoy riding bikes and having a hilariously fantastic time, a dance party, food trucks and beverages to stay cool on a summer night.” There is no dress code, but she says, “We strongly encourage people to dress up as if they were going to prom or semi-formal school dance. Not mandatory, but who’s kidding—it is a lot more fun when you dress up!”

Reynolds adds, “Some [attendees] will also adorn their bikes with multi-color lights, flower garlands, ribbons and even bubble machines. We just want any décor to stay on the bike [so] as to not litter or cause hazards to riding.” Murphy seeks maximal participation—“The more, the merrier!” he says.

“The Collective is a genuine grassroots organization focusing on bicycling as a sustainable means of transportation. The educational programs have expanded over the years, and our reach to various communities.”

This event is open to all cycling abilities and even different wheeled modes of transportation. Reynolds says, “The organization is focused on the two-wheeled bicycle, yet we encourage people to use most alternative-to-car modes of transportation. We are expecting that some attendees may rent scooters, but we would encourage them to try to find a bicycle (come buy one at the Collective!) to really get into the spirit of Bike Prom.” Along those lines, if you don’t have a bike or are for any reason unable to ride a bike, you are still welcome to skip the ride and go directly to the Prom. I’d suggest you take a bike taxi. The ride will also have an official police escort.

The Bike Collective is a cause well worthy of your support. Reynolds says, “The Collective is a genuine grassroots organization focusing on bicycling as a sustainable means of transportation. The educational programs have expanded over the years, and our reach to various communities.” If you haven’t done much to fix your bike yourself bike shops can be intimidating, but the Bicycle Collective is, as Reynolds describes, “a safe and welcoming place for all human beings. Beyond ready-to-roll bicycles, we have parts and safety gear available in the retail space. Staff are always keen to help and knowledgeable.”

If you aren’t able to attend the Bike Prom, you can still support their mission, as the Bike Collective always welcomes monetary donations and will even take your old bike off your hands. You can find information about the collective and Bike Prom on their website or on their Facebook.

Bike Prom will roll out Saturday, June 8, with the ride leaving Fairmont Park at 6:30 p.m. and ending up at Tracy Aviary at 7–7:15 p.m., so you have plenty of time to find a date and make a proper promposal. Admission will be between $25–30. If you are outside of the Salt Lake City area, stay tuned for details on the Ogden and Provo Bike Collectives holding their own bike proms.

Editor’s Note: The creation of Bike Prom is rightfully credited to Agnes Robl at the time Jonathan Morrison was the Executive Director of the Bike Collective.

In the words of Jonathan Morrison:

“Earlier that year my wife (Joellyn Manville), Agnes and I rode bicycles to a local woodland creature themed party.  Agnes and Joellyn were wearing prom dresses from the D.I. and Joellyn and I rode our tandem (the same one used in all the original bike prom photos by Anna Day).  During that night I blew out my knee, my dancing is not only bad but apparently dangerous and I had to get a ride back.  Thankfully Agnes volunteered to ride the tandem home alone—in her prom dress.

Bike Prom: Going Tandem
Beautiful Godzilla: Will You Go to Prom With Me? Check _ Yes _ No