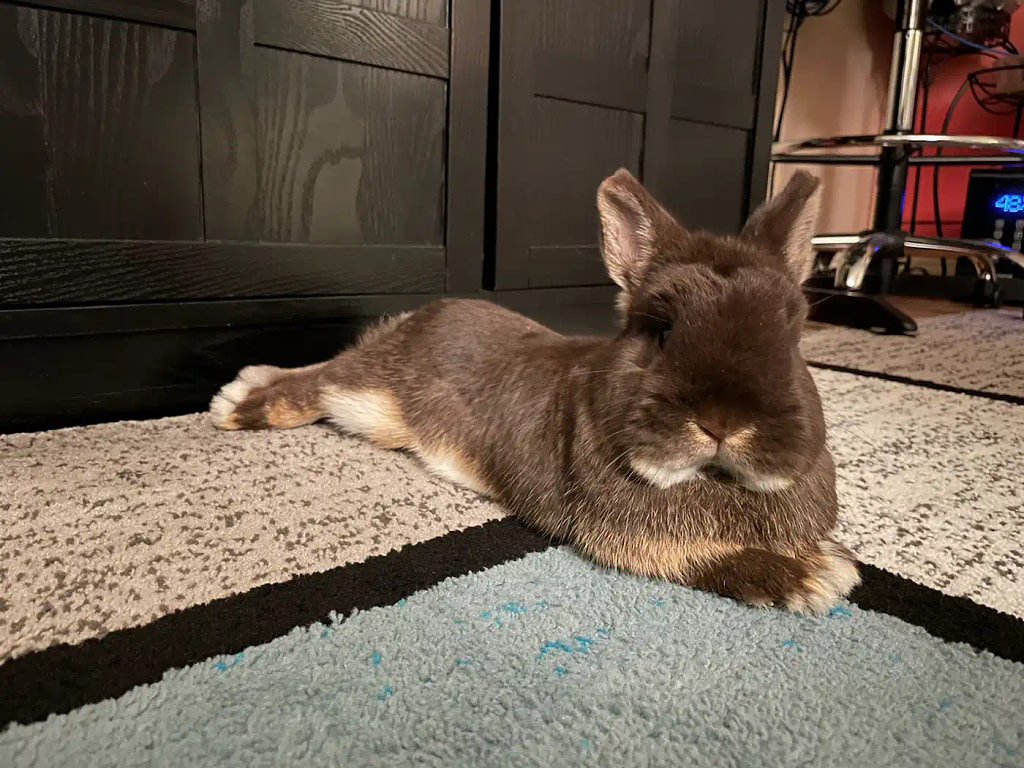 Animal lovers Nicole Hellstrom and Whitney Schulte operate True Hearts for Healing Paws Rabbit Rescue, based in Taylorsville. Both were previously involved with rescues that focused on dogs and cats, and the two have shifted their focus in order to sustain the only true resource for abandoned, domesticated rabbits in Utah. When a farm was discovered to have a bunny hoard that was being neglected and suffering in a barn, they stepped in.

True Hearts began as a simple Google document that was posted on other rescue and adoption Facebook pages. As the document began to fill up, Hellstrom and Schulte knew they had a bigger problem to solve. “The Humane Society only takes owner surrenders, and Best Friends Animal Society only takes from other shelters,” says Hellstrom. “There were 35 rabbits [at the farm]—we had to get them out of there. Soon after, another rabbit dump was reported with over 60 rabbits. We had to do something.”

“There is a misconception that rabbits can survive on their own. They are animals of prey … so, constantly in danger and very fragile.”

Since rabbits are the third–most common household pet with the fewest resource centers, Hellstrom and Schulte took it upon themselves to create a system of safe havens. True Hearts became an official rescue for these furry friends.

Many abandoned rabbits show signs of abuse, not just neglect. When True Hearts steps in, they provide each rabbit with the proper vaccinations and also spay and neuter the rabbits while providing any extra medical care that these rabbits need for them to recover and become healthy and happy. This includes massive expenses such as amputation or other abuse-related surgeries. They also promise foster parents and adoptive parents that they will help every step of the way for the care of the rabbit. True Hearts’ hands-on commitment ensures that no rabbit is dumped again.

Rabbits are often dumped because there are no places for them to go. “There is a misconception that rabbits can survive on their own. They are animals of prey … so, constantly in danger and very fragile,” says Schulte. Rabbits can easily overheat in the summers and freeze in the winter, not to mention their susceptibility to predators. “We are contacted almost daily about new dumps,” says Schulte. True Hearts typically has around 35 rabbits available for adoption, but the numbers can get as high as 60.

“Rabbits are good for people who are willing to listen and respond to a rabbit’s body language.”

While rabbits are cute, soft and seemingly cuddly, they are also complex beings with unique dietary, environmental and socio-emotional needs. “Rabbits are good for people who are willing to listen and respond to a rabbit’s body language,” says Hellstrom. Schulte adds, “Rabbits are not a good starter pet.” The two biggest misconceptions about rabbits Schulte and Hellstrom warn about are that “rabbits do not live in hutches” and “they should be eating 80% hay—not pellets or carrots.” Rabbits are great for people who want to care for a loving, shy pet that is integrated into their home. “Since rabbits are prey animals, they often don’t like to be picked up,” says Hellstrom. On occasion, when a bond is built, a bunny will welcome being cuddled by a trusted human friend. Like dogs and cats, rabbits need someone to check on their wellbeing and to provide a comfortable space and playful stimulation.

Rabbits are happiest with the ability to roam inside the home as litter-trained pets alongside a bonded mate. True Hearts even allows foster parents to take rabbits home for a trial period for them to bond the rescues with their own rabbits before they adopt them, risk free. True Hearts helps to train curious rabbit owners on how to care for rabbits and provides guidance and assistance the whole way through on topics such as how to trim a rabbit’s nails, litter training, dietary needs and medical assistance.