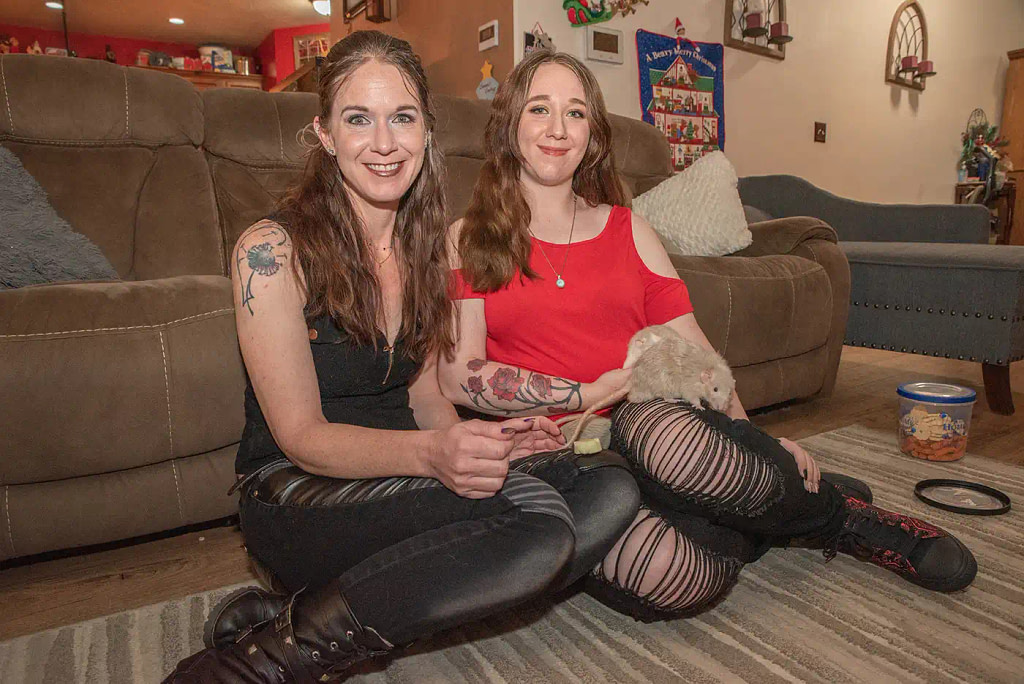 It’s a somewhat open secret that rat companions are a hot new trend, with anecdotal evidence mounting regarding their charm, friendliness and accessibility as a pet and even as a therapeutic resource. Julie and Aislynn Smith know these facts more than most as the founders of Scrat Pack Rattery. Yes, you read that correctly … a rattery.

Scrat Pack was built in 2020 from a creative attempt to foster new a social support and sense of renewed meaning for Aislynn as she faced a set of rare and serious chronic health conditions that augured a complete shift of lifestyle. Atop that came the pandemic and an even more salient need for social isolation and safety measures. Julie and her family needed something to focus on other than health crises and public risk, and a touch of companionship and loving energy could do wonders. “It really helped her pull out of a funk and became a therapy for the whole family,” says Julie. So became the origin story of a sweet little space to breed and share some of nature’s most clever and oddly delightful creatures.

“They’d rather be with you than anyone else, unlike hamsters and mice. They want to be with their people.”

Rats have historically gotten a bad rap. Commonly attributed to zoonotic disease and a survivalist tendency to “infest” the forgotten corners of the world, the humble rodent is certainly misunderstood. However, the tides seem to be turning for these tiny pals. “There is such a big following for rats in not just the U.S., but the U.K., as well,” says Julie. From the intentionality and enthusiasm of Scrat Pack’s two-human team, it’s apparent that rats are on the rise. “They’d rather be with you than anyone else, unlike hamsters and mice. They want to be with their people,” Julie says with a giggle.

As for the healthiness of housing a rat, the history is only the surface. “They prefer being clean, and they are easy to litter train.” says Julie. According to Scrat Pack, rats are capable of knowing their names, recognizing people and playing games. Aislynn says, “They show that they love you—I train them to give kisses.”

“We have a lot of adopters, a lot are consistent and return,” says Aislynn. Julie adds that “folks will actually get a little addicted to them.”

According to Scrat Pack, breeding, early-life husbandry and home matching is a more attentive process than one might assume. Scrat Pack specifically breeds non-biting rats who are selected for health status and capacity to be personable. “Even the naughty stuff is charming, and they know when they are being naughty. All of them have very different personalities,” says Julie. Treat training is also a standard for Scrat Pack’s babies, and several have stood out for their especially sweet personalities and fun temperaments. “We have a lot of adopters, a lot are consistent and return,” says Aislynn. Julie adds that “folks will actually get a little addicted to them.”

Unlike cats, dogs and other traditional furry companions, rats are generally exempt from pet rent policies, lending to their increasing demand. They are intelligent, personable and can learn to adapt to the lifestyle of their owner. Having a rat is not entirely easy, though. “Make sure you have an exotic vet—only they will see rats. If they have genetic or major health problems, vet care can get very expensive,” says Julie. For these reasons and more, seeking a companion rat from a careful rattery such as Scrat Pack is critical. “Sometimes folks get rats from somewhere else and come to us for help,” says Julie.

Rats are gaining love for good reasons. “It’s like having a pocket puppy,” Julie says, laughing. Scrat Pack expects to see an ongoing waitlist and an increase in demand over the coming year. If you’re a potential pet parent who has done their research and is committed to lifelong care, Scrat Pack may have the sweet, new furry friend for you. You can learn more about Scrat Pack, purchase merch (including their custom “bonding scarves”) and reach out to begin the adoption process via Instagram
@scratpackratteryutah and on Facebook at Scrat Pack Rattery Utah.