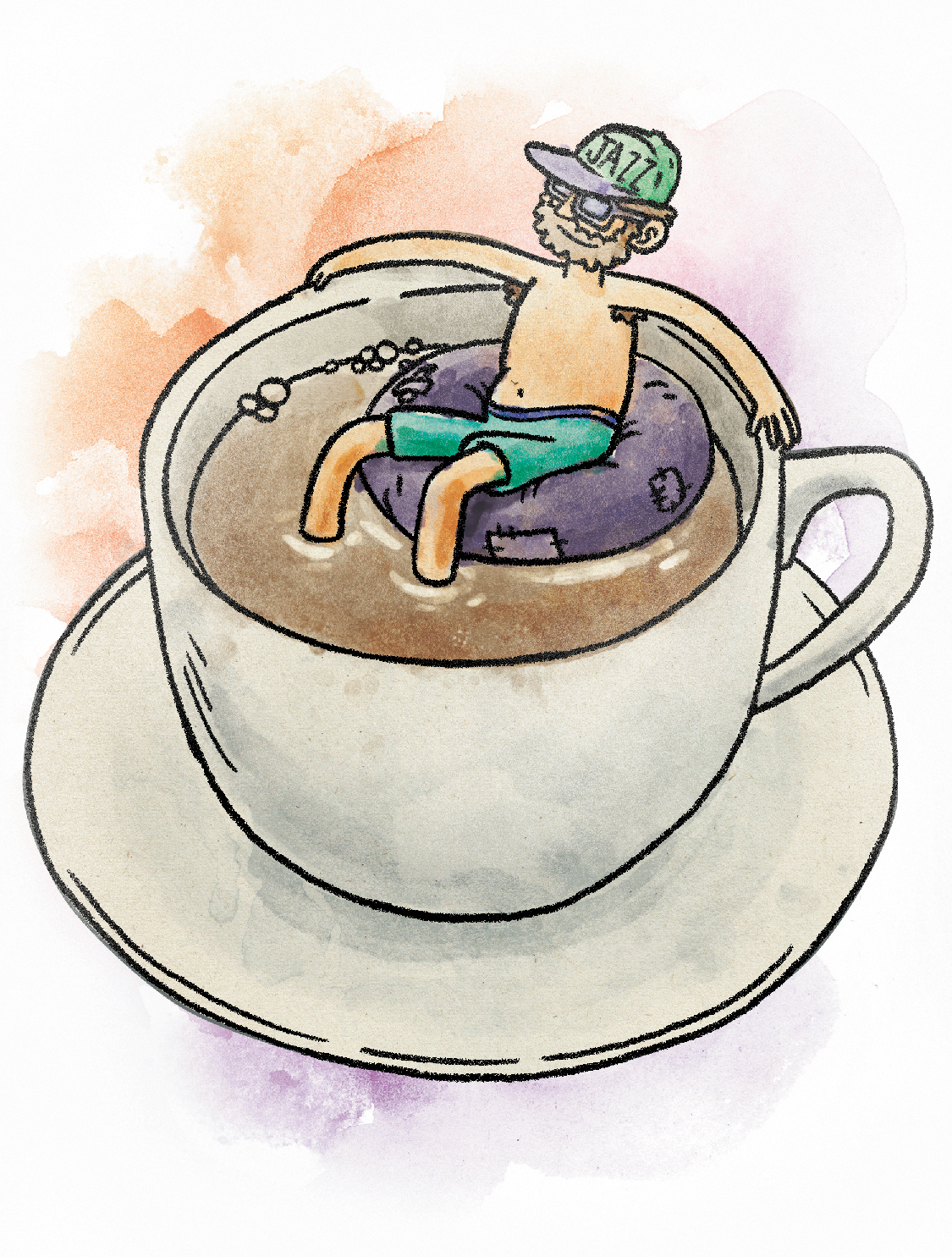 At this very moment, this very second, as you are perusing this issue of SLUG Magazine, there is a chance—more than a slight chance—that you are sitting on your ass and sipping a latte at one of our fine local roasting establishments. I’m assuming this based off of our distro route numbers and the fact that I am writing this article in one of our local coffee shops, Bad Ass Coffee on State Street, to be specific.

Bad Ass Coffee is tucked away on a quaint strip of State Street in between Chinatown (well, Salt Lake’s version of Chinatown), some car dealerships and some strip clubs. It’s fitting because I usually take my coffee the way most gentlemen’s-club patrons prefer their strippers: a hot mess spilled all over their lap. You probably thought I was going to say rich, wet and creamy, but I’m trying to keep it real here.

As with most of my buying habits, I make an effort to shop local as much as possible. Sure, from time to time I’ll shop at Target when I don’t want to be seen at Wal-Mart, but with regard to coffee shops, I try to frequent Salt Lake’s local establishments as opposed to spending bucks at Starbucks. Honestly, Starbucks puts out awesome coffee, and they take great care of their employees from what I’ve heard, but the role they play in pumpkin-spice culture is unforgivable.

And I hate having to order drinks in their strange vente-verde-grandio shit they got going on. I order all my drinks and drugs by the ounce, like a real American. Fuck your metric-system language nonsense, Starbucks. The best thing that Starbucks has ever done for our coffee culture is keeping the Xanax-popping, Ugg-wearing, Escalade-driving trophy wives out of local coffee shops, so thank you for that.

Though the brew at your local coffee shop has stayed the same over the years, I’ve noticed that the people who frequent these spots have changed slightly. Sure, you still have your shitty screenplay writer tucked away at a table secretly hoping that the 22-year-old barista will ask him about it so he can woo her with the world’s worst movie plot never to be adapted into motion picture form. These days, though, he’s using an iPad with a detachable keyboard instead of a spiral notebook.

And the coffee-shop staple person of my youth, teenage-gothic clove smoker, has seemingly been replaced by dork-ass vape-pen guy. Sadly—or self-fulfillingly—maybe all the goths from my youth have finally died off? I only know of one left who took over a magazine (the one you are reading), so if we see any more goth kids in coffee shops, can we call the Environmental Protection Agency ASAP and get them on the endangered species list?

I still see a chess nerd from time to time at the local coffee shop, and that’s heartwarming. I haven’t seen poetry-slam dude for a while, but I can’t say that I miss him. Overly caffeinated homework kid is still there, spotted more and more frequently the closer the coffee shop is to campus. Oh, and who could leave out the exclusive-to-Utah rebellious Mormon with blatant disregard for the Word of Wisdom, all while ordering hot chocolate for her six kids? That one must drive the barista suicide rate up.

The other popular modern humanoid sighting at the coffee shop these days has to be the first Tinder date. What better place to discover a grossly exaggerated online-dating profile than a public coffee house? If anything, this has to be mildly entertaining for all coffee shop employees.

And speaking of coffee shop employees, I must applaud you all. Not many people let others loiter at an establishment for 10 hours straight by only spending $1.50 and not tipping or let terrible people destroy their bathrooms on a consistent basis. I bartended for a while, so I know what it’s like to put liquid in a glass—easier said than done. Also, I like free coffee, so if any baristas are reading this and recognize me, remember that. I like free coffee.

Let’s also not forget how helpful the actual substance of coffee has been to our society over the years, from helping hipsters get their cocaine by disguising the scent from drug dogs to keeping truckers who couldn’t score some meth awake at night, thus keeping our economy lubricated. Coffee is important.

There have been a handful of addictive substances I’ve bounced back and forth with in my life, whether it’s tobacco, alkee-hol or fantasy basketball, but for me, the steady addictive constant that is and always will be is caffeine, preferably in the form of hot, black coffee. Telling me to stop drinking coffee these days would be the same as telling me not to poop. Aside from the fact that coffee helps me poop, there’s no way I could physically stop pooping without exploding into a massive poop mess at some point. I feel like if I stopped drinking coffee, a similar mess would happen.