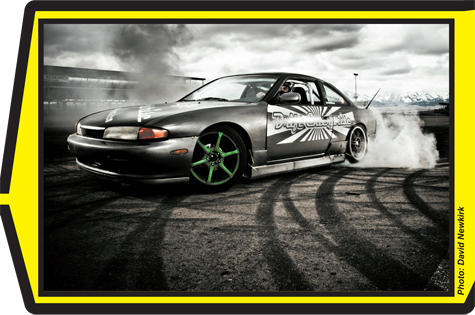 The first time I ever went drifting was a couple years ago, and it started in that shit hole of a money-vacuuming town known as Las Vegas.

It had been a particularly rough SIA tradeshow.  This tradeshow consistently blows donkey balls and I had a lot of personal shit going on. The fluorescent lights and fake sales reps were not helping matters. The free beer was until it started fucking up my ordering capabilities. I can do a lot of things drunk, but writing orders (for the snowboard shop where I work at the time) is not one of them.

While this was going on, my girlfriend was busy fucking up our relationship in New York, my stepdad was fighting cancer in a hospital and I was writing orders until 7 in the AM.  So by the time this stupid week was done my stress level was beyond its normal threshold.

As me, Danny, and Aska were finally leaving Las Vegas in Aska’s Subaru, we stopped at a store for provisions for the journey home. I bought some snacks, a bottle of whiskey and fireworks to help ease my stress.  I made myself a particularly strong road soda and proceeded to stake my claim on riding shotgun.

I’ve been on enough road trips to know that getting wasted is the best way to get out of driving duty. So I got pretty hamburgered in the front seat. A snowstorm hit and semi-trucks start jackknifing. Cars were spun-off the road and bumping into each other. I-15 had become a massive shuffleboard and the cars were the little discs.

I asked Aska, my friend who was driving, if she could handle the treacherous conditions and get us home in one piece. She’s from California, and nothing personal against her, but most people from that state can’t drive for shit in the snow. But Aska said she was up to the challenge.

A couple hours away from Salt Lake, somewhere around my favorite county in Utah, Beaver, we hit some of the finest black ice that I-15 had to offer. Aska was going about 60 MPH down a slight incline. There were hills on both sides and the guardrail hadn’t presented itself yet.

“A couple hours away from Salt Lake, somewhere around my favorite county in Utah, Beaver, we hit some of the finest black ice that I-15 had to offer.”

Her car started doing these massive fishtail drifts and Aska started freaking out. Danny was in the backseat yelling at her to over-correct her steering. I kept my mouth shut. The last thing Aska needed was two people yelling at her. I couldn’t really think of anything good to say at that moment anyway, it was like being on an awkward date or something.

I just remember thinking, “we’re gonna crash,” and there’s nothing I could do but think about it.  Most car wrecks just happen and you don’t have time to think about the impact at all.  This must be what it‘s like when the plane is going down down down. The thinking made the whole thing surreal for my whiskey drenched brain.

But for some reason I wasn’t scared. Then I saw the start of the guardrail approaching.  The massive corner of concrete may as well have evil eyes that were staring right at me. We were sliding right for the fucker and it looked as if Aska’s car was gonna t-bone on the passenger side, right where I was sitting.

I stared back at the corner of the guardrail, and the nihilist in me whispered, “Fuck it! What happens, happens.”  We got closer and closer and the Subaru meets the guardrail in a colliding fashion.  Somehow it missed where I was sitting by a couple feet and clipped the back corner of the car, sending us spiraling out of control in the middle of the freeway.

We finally came to a dead stop, facing the wrong way. There were no other cars around on this cold dark night.

I have never gone from so drunk to so sober so fast.

After I went drifting at the Larry H. Miller (R.I.P.) Raceway with the dudes from Drift Enterprise, I learned that my car crash wasn’t actually drifting at all, because there was no real counter steering and Subaru’s aren’t rear wheel drive.

When I found out I was gonna go on a special SLUG assignment to cover the local drift scene, the first thing I asked was if I could ride shotgun. Drift Enterprise kindly obliged, and Jesus Christ was it fun!  Kind of like Mister Toad’s Wild Ride without the smell of vomit and howls of crying children. Burnt rubber and tire smoke filled the cool air, screeching tires and bleeding clutches were aplenty.

All I knew about drifting before this day was from those crappy Vin Diesel Fast and the Furious movies that I’ve never seen. I was gonna rent the whole series for research purposes, but after I actually went I realized that would be like someone judging skateboarding by watching Gleaming the Cube, and that’s just not fair to anyone.

I asked those guys if they hate those movies as much as I hate that dude who played Stiffler in American Pie, and they said they weren’t really bummed out on it.

“When I found out I was gonna go on a special SLUG assignment to cover the local drift scene, the first thing I asked was if I could ride shotgun.”

For one thing, those movies bring exposure to the sport, and we all know there’s no such thing as bad publicity.

Drifting started on the mountain roads of Japan almost 30 years ago, pioneered by Kunimitsu Takahashi, who was a motorcycling legend turned driver. It’s been underground in Utah since around 2000, Ryan Hogan brought the first legal and sanctioned events to Utah.  Drift Enterprise has been doing events for about two years now.

Defining drifting to someone who hasn’t tried it can be kind of tricky.  I thought it would be a lot like just stealing your mom’s car to go do doughnuts in a snowy church parking lot—but there’s no counter steering involved in that either.

The cars we were riding in were going about 50 MPH, but it seriously felt faster. Professional drift racers can get up to 90 MPH before busting out a sick burner.

These guys were actually racing their cars too, but unlike typical NASCAR shit, competitions are judged a little differently.

At Drift Enterprise, they look for speed, line, angle consistency, smoke, how close you get to the clipping points without knocking over the cones, and sometimes how close you can get to the wall without pulling a Dale Earnhardt, Sr.  I personally found drifting way more entertaining than just watching cars go in circles for a couple hours.

When I asked how dangerous drift racing actually is, they told me it’s not too sketchy. Since Drift Enterprise has been around they’ve only had four cars smash the wall and zero injuries.

The cars where all kinda tiny and ranged in age from 24-years-old to one-year-old. The Nissan 240sx is very popular because it’s cheap and reliable. Another popular drifting machine is the 1985-87 Toyota Corolla GTS. If it sounds like this shit is tough on the cars, well, you heard right. These cars take more abuse than a redheaded stepchild—most notably the tires. You will be changing your tires more than you will be filling your gas tank.  We saw at least four tires blow out and we were only there for like three hours.

“If it sounds like this shit is tough on the cars, well, you heard right.”

You are also gonna fuck up your front control arms, suspension, and I saw a clutch go out.  But honestly, I was raised by my mother and failed auto shop twice in high school, so I don’t really know what that means or how to fix any of that stuff.

Everyone we saw at Drift Enterprises was working on their own cars, changing their own tires and what-not. No pansy-ass pit crew for these guys. There are some sponsors, such as CrazyCarAds, Howsmydrifting.com, D1 Underground and RevWear.com, but for the most part the local drifters are putting their own time, money and tires into their passion.

Needless to say, the level of commitment makes it pretty respectable by someone like me.  I asked them what the other race-car drivers thought of them. Do they respect it or do they clown it?  It can be hit or miss, typically if other racers try it, they respect it,  but since drifting is the fastest growing Moto sport right now, the respect isn’t that far away.

While we were there a group of racecar driver guys drove past the drifting course to gas up.  They all had those funny jumpsuits with all the logos on them and their cars all looked like they drove through some gigantic marketing department caking their vehicles in sponsors.

Most of them stopped to watch the drifters, in their street clothes, tear the raceway apart.  I know who the badasses are—even if no one from Drift Enterprise has ever drifted through a red light.

The local drifting scene is made possible by Ryan Hogan, Matt Barrona and Mark Medalla, who all own Drift Enterprise. Shout-outs to the volunteers that help them out:  Brittany Struck, Meng Yang, Esther Barron and Woon Lyu.

Now, I don’t think I’m special because I got to go drifting. Guess what?  You can go too!  Beginning Friday May 1, the drifters meet every other Friday at the Rocky Mountain Raceway. Ride-alongs are $22, worth every penny, and anyone who knows how to sit in a car can do it.

Special thanks to Matt from CrazyCarAds for hooking SLUG up with our drifting adventure!