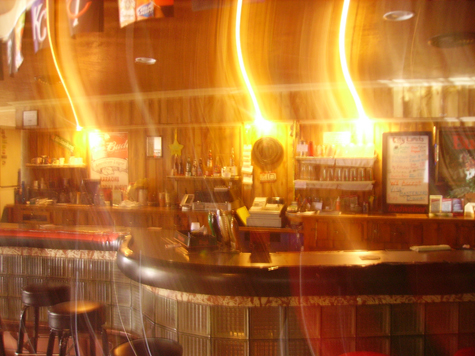 Drink and Be (Relatively) Merry

To be clarion clear: Scope mouthwash is intended only to kill off the germs left in your speak-pit by refugee hamburger chunks, feces particles, and stray pubes. These things cause bad breath and plaque formation, which complicate things like job interviews and getting laid. The hardworking men and women at Proctor & Gamble saw fit to load up Scope with an astonishing 18.9 % alcohol content—thrice the potency of the average beer. No one at Proctor & Gamble is advocating the recreational use of Scope in any way, shape or form. In fact, it’s very likely that swallowing Scope will render your stomach a post-apocalyptic wasteland of Thunderdome proportions. Ask any doctor. He’ll tell you that shitting enough black blood to bury Pompeii is not a standard hangover symptom.

Having said that, sometimes necessity is the mother of chugging medicinal mouthwash until you puke electric blue bile. For example: let’s say Mr. Phileas Fogg of London has wagered you 20,000 pounds sterling that he can get mailbox-fucking blitzed in a more concise time than you, good sir. Or maybe you currently reside in Provo, UT with the holy sabbath upon ye, and there’s no one who can drive you to Springville for hooch.

This is how we find otherwise intelligent people mixing Scope margaritas in their living room. People like Dane Newman, a philosophy T.A. who reads two books for every episode of Tim and Eric that you watch. Let’s face it—most high school kids in the country know where and how to get beer. Some of us are late bloomers. Newman, newly covetous of the bottle’s contents, found himself in an unfortunately common predicament: he wanted alcohol, but didn’t know how to go about getting it. Provo kids know where to find LaVelle Edwards Stadium, Smith’s, a gas station, a movie theater and their fiancé’s apartment. They couldn’t find beer with a GPS and a pack of bloodhounds trained to sniff out hops and barley.

So it is to people like Dane Newman, suffering from hardcore mouthwash-related ulcers at the tender age of 24, that your reporter dedicates this brief rundown of watering holes and beer repositories in Happy Valley. Because, although Ben Franklin says that beer is living proof that God loves us and wants us to be happy, Provo is ample evidence that Elohim harbors unbendable disdain for at least a modest number of his spiritual poopings. Without alcohol, the excruciating sexual tension that accompanies an early to mid-twenties stint in “Dry Hump City” makes a body pine for a high power rifle and the nearest clock tower. In fits of unbridled sobriety, the Wasatch mountains, once picturesque, start closing in like the walls of a German Expressionist nightmare. It is to you that we at SLUG say put down the mouthwash, surrender your car keys, and drink up.

Pros: ABG’s is probably your best bet if social drinking is your game. It also functions as a sort of no-man’s land between the various bar cultures, with psychobillies, hipster douchebags, aging winos and the occasional schweet bro co-existing in relative Pax Inebriata. With its friendly staff and laid-back atmosphere, ABG’s is a fantastic place to drink cheap beer and listen to Tom Waits until your eyes are bleary and your legs are Jell-O.

Cons: Watch out for buzzardly older women, who recognize that they are too old to be shaking rumps at Atchafalaya’s, but believe themselves too dignified to join the dregs at City Limits. You’ll be prohibited from using plastic unless you can commit to a tab of at least twenty dollars (get petty cash at 7-Eleven, cheapskates) Also, more than any other bar on Center street, ABG’s is a Mecca for cops seeking an easy satisfaction of their monthly quota.

Pros: If you prefer a more perennial celebration of Mardi Gras, Atchafalaya is the place for you. They also have a weekly karaoke night, which may or may not be entertaining, depending on your tolerance for ironic despair. Their signature cocktail is the “Lousiana Fuck-Up,” which actually gets the job done. After two of these, you might just gather the courage to go bump and grind on the horse-faced girl with the deluded Sarah Jessica Parker complex.

Cons: If you have two brain cells to rub together and make a fire, you will despise this place. It is the loud, obnoxious hell you always expected was your post-mortem destiny, except without Rasputin and Ed Gein there to keep it interesting. Dirty South megahits blare from a host of dirty speakers, making conversation impossible. Not that you’d want to converse with any of the bar’s patrons. In fact, Atchafalaya’s only real purpose is perhaps to confirm your deep-rooted suspicion that humanity is, in fact, too sick and stupid to survive very much longer. Stumble home and prepare for the imminent apocalypse.

Pros: You may be noticing a trend here: the further west you go in Provo, the more off-putting it gets. In this case, City Limits might actually be the best entertainment for miles—if your idea of a feel good movie is House of 1,000 Corpses. Throw out all of your alt-country illusions before arriving here: the patrons at City Limits are cowboys closer in spirit to Blood Meridian than Band of Annuals.

Cons: This is a beer bar. Don’t ask for a White Russian or an Appletini, because depending on the staff you’ll either receive a blank stare, or get a board with a rusty nail waved at your crotch. City Limits is also, according to the most recent Rand McNally World Atlas, “The Saddest Goddamn Place on the Entire Planet.” With its typical milieu, it’s easy to see why: truck-stop hookers, broken down shitkickers with complexions like corrugated cardboard and “Rockin’ Mike” (who set new lows for karaoke with a rendition of “Girls, Girls, Girls” and then followed me to the bathroom, where he stared unflinchingly at me while I pissed)  call this place home.

Pros: Although technically not in Provo, your reporter feels the need to highlight this bar. Like ABG’s, it is a comfortable, liminal space for all kinds. It is spacious, clean, has a fantastic hunting lodge atmophere, and offers one dollar PBRs  Monday through Thursday. Moreover, The Deerhunter, unlike any other bar I’ve been to, features a bookshelf! Not everything on it is stellar, but if you’re feeling pensive, you might sit down on one of the comfortable couches with some Mark Twain, or a volume of The Decline and Fall of the Roman Empire. Basically what your reporter is trying to say is that The Deerhunter might be more aptly named Shangri-Fucking-La. The last time I was there, they were showing Let The Right One In on the plasma screen TV. The Deerhunter is not a bar you want to frequent—it is a bar you want to live in.

Cons: It is almost impossible for first-timers to find. Find a Virgil to your Dante, and see if you can convince him to take it easy on the sauce—even if you live in Spanish Fork, The Deerhunter is remote enough to make driving home a potential debacle.

Smith’s in Provo (on a Sunday)

This should be utilized only if you’re desperate for a brew and it happens to be Sunday. If you have the funds, just go to a bar. If you have a car, just drive to Springville. If you’re absolutely bereft of options and need a beer to get through church, then God be with you on your journey to “acquire” beer from the Smith’s. Be wary of secret shoppers, and try to go only when business is relatively dense. The beer aisle is within sight of the self-checkout warden, so don’t try anything too fancy––a tall boy or two, at maximum.

If you are fortunate enough to attend The Lord’s University, then the other 7-Eleven in town is probably closer to your home. The other 7-Eleven is crawling with Cougars, who treat the chagrined staff like Arnold on Happy Days and leave a patina of Slurpee syrup on everyone and everything. You will more than likely get caught red-handed buying Red Stripe by the guy you sit next to in Old Testament Class and be turned in to the Honor Gestapo. Do yourself a favor and head over to the 7-Eleven on third south and Freedom, but be careful: while North Provo looks like a giant J. Crew catalogue come to life, South Provo is crawling with meth heads and hobos. Get your beer and don’t make eye contact with anyone.

This method is not recommended for everyone. If you know you’re not going to make it to the store in time to get beer, your only hope is to make friends with a certain cashier at a certain convenient store, not to be named here. Once you’ve established a bond with––let’s call him “Sanjay”—call him before you go, and ask him to put your beer behind the counter. Good luck trying to establish that bond, though. Life in “Dry Hump City” has made “Sanjay” believe that most people in town aren’t worth the Slurpees they spill on his floor.

It’s not perfect, to be sure. If you can transfer to U of U, find a different job up in Salt Lake, or even just make your own personal exodus from the Beehive State, then do. The cost of a U-Haul renter will be repaid to you ten-fold in years of stress-free beer swilling. If you are among the hundreds of social curiosities who cannot seem to escape Provo’s cultural zeitgeist, looming like a flock of vultures who despise fun, then hopefully you might find a modicum of respite in any one of these places. The alcohol may not flow as freely as you’d like, but we make do with what we’ve got. If nothing else, your puke might taste a little less minty. Slainte Mhath.