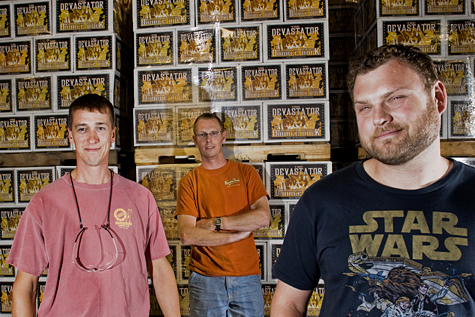 He who drinks beer sleeps well.  He who sleeps well cannot sin.  He who does not sin goes to Heaven.  Let us all drink beer and go to Heaven. Amen.–German Monk Proverb

For centuries, breweries have served as a pillar of the community, producing beer for countless thirsty locals. Curious brewmasters experimented with various combinations of hops and yeast to conjure up delicious libations that entice the palate and awaken the spirit. As breweries changed to adapt to their environments, so did ideas about what made a fine beer. The brewmasters at the Utah Brewers Cooperative (UBC) are no exception.  Head Brewers, Adam Curfew, Dave McKean and Jon Lee use their collective creativity to develop new selections, putting the UBC at the forefront of the industry.

In order to facilitate their domination of the local beer market, the owners of Squatters and Wasatch Breweries joined forces in 2000 to create a third entity know as the UBC. “Now we are twice the brewery, now we are a team,” said McKean. Before the deal was even inked, the UBC began producing beer in its improved facility at 1763 South 300 West. With the ability to use each other’s resources and increase their buying power, Squatters and Wasatch churned out barrels of their tasty brews for Utahns to enjoy.

Home brewers at heart, these three know how to make a fantastic beer and understand the importance of the time and effort that goes into it. In 2008, the UBC ranked 43 in the Top 50 Craft Breweries by the Brewer’s Association—a noteworthy achievement that places them ahead of every other craft brewery in the state. “This recognition shows how vibrant the beer community in Utah is and that the people here love craft beer,” said Curfew.  Lee said, “It is reflective of the beer drinking community and their tastes.  We make 21 beers and everyone can find one that they like.”

Included in their cast of 21 are two newcomers: Wasatch Summerbrau and Summer Twilight. Inspired by, you guessed it, summer. These brews are meant to capture the essence of the season, “That good, refreshing, I’ve-been-working-in-the-yard type of beer,” Curfew said.  For those Provo Girl and 1st Amendment addicts, Summerbrau is a copper-hued, Czech-style pilsner-lager that is sure to calm the nerves. “This is really a brewer’s beer, pilsner has always been a favorite of mine,” said Lee. Summer Twilight is a kölsch style beer that started at the Wasatch Brew Pub and has been slowly refined over the years. “It has become one of co-owner Greg Schirf’s favorites, and one that he really wanted to see on the shelves,” said Lee.  These two brews score high on the Alcohol by Volume (ABV) index, 5.6% and 4% respectively.  Perhaps the best part of all of this is that the UBC can sell its high-point selections cold. Imagine that. Fresh and delicious beer, refrigerated and ready for immediate consumption—off-premises of course! How are the folks at the UBC able to accomplish such a feat?  “Because Greg Schirf rocks!” said McKean. Schirf is the reason you can even go to a brewpub in Utah, a true beer-pioneer. His efforts during the late 80s pushed the Utah legislature to change the law and make brewpubs legal.

A rule change passed this last year by the UDABC has served as motivation for UBC brewers to come up with more high-point beers to meet the demand of deprived consumers. You can expect to see several new selections being released over next fall and spring.  Keep your taste buds alert for a special mid-summer release of Squatters Hell’s Keep. Originally produced at the brewpub, the fellows at the UBC have crafted a 30-barrel batch that will be hand-bottled in 4,000 750 ML bottles. The unique aspect of this release is that each beer will be bottle-conditioned to evoke a softer palate. Curfew said, “This is a real labor of love. A big project for such a small release.” This is just one more illustration of the steps these guys take to produce a tasty beer that is fresh and ready to drink.

In addition to being able to sell high-point right from The Beer Store, the UBC is also taking notice of the latest piece of legislation that makes home brewing legal in Utah.  House Bill 51 makes it possible for Utahns to produce up to 200 gallons per year per household.  What does this mean for the brewmasters at the UBC?  “It has robbed me of my outlaw status,” said McKean.  Seriously though, these three see the passing of HB51 as a step towards gaining notoriety for Utah beers. “We are at the point right now where home brewers want to clone beers that we have made. Tear it apart and make it at home.  And that is a great compliment,” said Lee.

Talking with the UBC crew it is apparent that they have a multitude of experience in the craft brewing industry and want to ensure that it remains strong for years to come.  When asked what’s in store for the future, McKean put it simplest, saying “More Beer!”