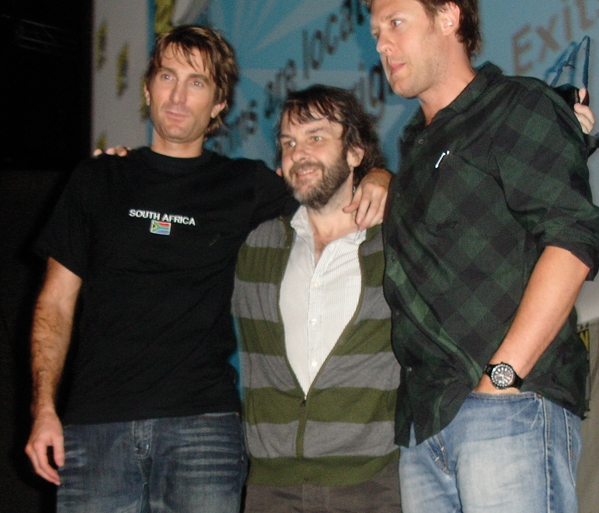 Thirty-nine years ago, the greatest gathering of sci-fi nerdary and fantastical dreams known as Comic Con International: San Diego (originally titled The Golden State Comic Book Convention) was founded by a modest group of San Diegans and only attracted 145 comic book enthusiasts. Fast-forward to present day, and the once humble congregation has exploded into the largest convention of its kind with over 125,000 attendees walking through the San Diego Convention Center’s doors to witness the freshest offerings from the worlds of comic books, films and video gaming (that’s an increase of 86,107%).

Comic Con starts on a Wednesday night with an exclusive look at the exhibitor’s floor and all the merchandise and promotional material available. The biggest draw of the floor, apart from the scantly clad “booth babes”, comes from the elaborate booths erected with massive structures. This year’s most impressive decorations included a life-size Bumblebee Transformer 2 and a futuristic war machine from James Cameron’s upcoming CGI epic, Avatar.

Along with the impressive environmental aspects of the exhibitor’s floor, another interesting characteristic of the sneak peek includes testing products not yet available to the general public. Mattel, the same company of Hot Wheels and Barbie, invited me to test their new board game that tracks brainwaves in order to move a foam ball with your mind. Yup, you just read that. The game is called Mindflex and the objective is to move a ball around a circular obstacle course with the power of concentration. I was skeptical at first, but it’s real! However, my concentration level was either nil and the ball sat there, or it was through the roof and the ball flew off on the table. I should probably see a psychiatrist about that.

The next four days are when the real events commence, and being the lover of cinema that I am, the primary location for all the film events are held in the building’s largest room, Hall H (capacity 6,500). Each morning, I arrived at 8 a.m. to find thousands of people already anxiously waiting in line (some having camped out over night). The majority usually consisted of giggling pre-teen girls wearing “I heart Edward” shirts and the noticeably annoyed comic bookers despising the new patrons. It’s quite the sight to see.

Here’s the greatest and worst offerings provided by the panels and after parties that made the 2009 Comic Con the pimple infested place to be!

Best
James Cameron’s return to the directing chair: After screening twenty-five minutes of appealing footage from the highly anticipated sci-fi flick, Avatar, I’m eager to see how well the king of the box office follows his preceding successes.

Greatest After Hours Activity:
Vice Magazine’s Metal Meltdown: For years, my brother said, “You’ve never been to a real concert until you’ve seen GWAR live.” Holy shit, he was right!

Best
The Visionaries Panel with James Cameron and Peter Jackson: The two masters of filmmaking discussed the possible gloomy future of cinema and the 3D technology that could rescue it that waits around the corner. On a side note, do you think they played chess with their Oscars back at the hotel?

Worst
Lucasfilm: Star Wars Spectacular: Not only did we have to put up with the obnoxious hosts of G4’s Attack of the Show, the only major announcement was a traveling symphony performance that performs music from the films … really, Lucas, really?

Greatest After Hours Activity:
Disney’s Flynn’s Arcade Replica: If free arcade game play, a souvenir Tron token, a sweet “Flynn Lives” shirt and music by Daft Punk wouldn’t stop your heart, a secret look at a neon-lit, life-size lightcycle certainly would … mine did. Someone call 911!

Best
Iron Man 2 Panel: Robert Downey Jr. knows how to rev up a crowd, but with the stunning never-before-seen footage that director Jon Favreau brought, he didn’t have to do much!

Worst
Sony Pictures’ 2012 Panel: How many different tedious ways can director Roland Emmerich destroy the planet? You know you’re in trouble when the audience laughs at your “dramatic” action sequences. Whoops.

Greatest After Hours Activity:
X-Sanguin VIII (Z-Day): The last stand of the Zombie Defense Network has found out the perfect weapon against the flesh hungry beast … alcohol and dancing! Keep on fighting the good fight.

In reality, Sunday is the day of recovery from the previous days’ events. Sure, you may find some stellar deals from the exhibitors who are trying to get rid of crap before heading back to their parents’ basements, but the panel selection is weak and everyone appears worn out. It’s the perfect day to pack it up, head home, and acknowledge that the people wearing costumes are actually in the minority outside the Con’s walls … we should all work on changing that.

See you next year!