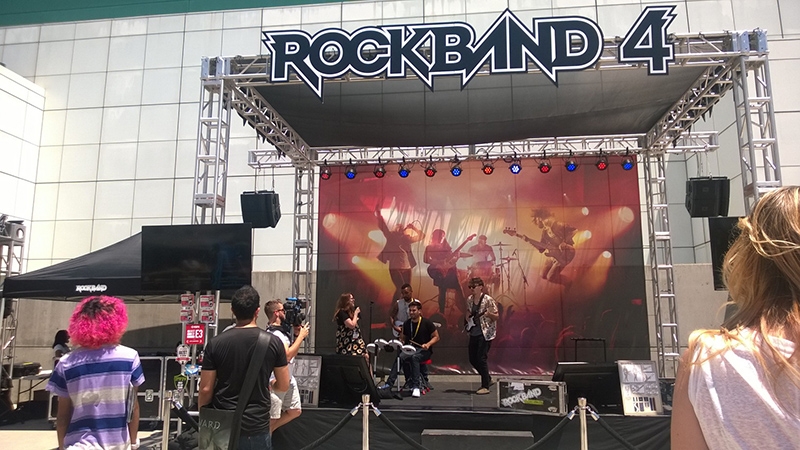 The last day at any video game convention is always a mad scramble to play the games you haven’t yet, or to replay favorites. You get in line early and rush to whatever game means the most to you—for me, that was Star Wars: Battlefront. Getting there early meant I got to play a few other games before my precious time was up. I breezed through Battlefront and made my way through a few games that were surprises and then an old favorite, Rock Band 4.

The trailer they released for E3 shows you defending yourself down on good old Tatooine with a buddy—which is exactly what I did a few run-throughs of. It’s as beautiful as you’ve seen in the trailer and this is only the alpha build. It’s almost like being in control of a Star Wars movie, which is kind of the best thing ever. I got a few extra shots from stormtroopers while taking in the world and all the detail. It’s not just a pretty face, it plays fluidly and the multiplayer battle I played through was just as amazing as the trailer. It’s just so stunning, I couldn’t stop grinning through the whole play through, especially when I used a rocket launcher to blow up an AT-AT walker. This game is going to be a huge hit for EA in November, so much so that they opened up the Tatooine demo to the public. While I was excited to play the game a ton of times, the lack of a line really surprised me. I had figured it would’ve been worse outside with all of LA invited, but the wait time was almost non-existent—which begs the question: Was it not advertised enough, or are people just not interested? I’m hoping for the former on this because this game deserves interest. Even just as a shooter without the Star Wars branding, it’s amazing—it should makes all the nerds ridiculously happy.

This was the other favorite indie game of the convention, with Unravel taking first. Cuphead is done in a cool, old-school ’30s animation style that’s charming and delivers a fun gaming experience that you won’t forget. Cuphead and Mugman lost a bet with the devil and are out to do his bidding—taking out monsters. You fight all sorts of crazy stuff in the demo—angry potatoes, three-eyed carrots, boxing frogs that combine to form a slot machine—it’s imaginative and some of it seems like it’s straight from an acid trip—not that it’s a bad thing. The game’s controls are simple: You shoot up the baddies, jump to avoid the obstacles they throw out and use a special attack. It’s the visuals that really sell the game—the sketches are beautifully animated and colored and it’s fun to see what you need to wallop next. It’s coming out sometime next year. It’s going to be a long wait.

This whole Dynasty Warriors craze has taken over yet another beloved IP, the Dragon Quest series. I actually loved the gameplay in Hyrule Warriors, even if it got a little tedious sometimes and it’s the same with this game. The only real difference is the graphics level. DQH is only on the PS4 and that makes it goddamn gorgeous. It’s the same smashy-smashy concept as the other Dynasty Warrior games—you can switch between characters on the fly, making it easy to get the best angle. The specials, as always, are beautiful scenes of death for baddies, so it makes for some satisfying kills. It’s set for release in October on PS4.

Finally, there’s a new Rock Band, with new songs and new guitar solo mechanics to make playing with your friends even more fun. It’s still more or less the same Rock Band you already know, but the biggest addition is the solo mechanics. Instead of simply playing the notes on the screen, when you hit a solo, the notes disappear and it’s up to you to put a solo together—strumming at a certain rhythm, holding notes and free styling by hitting any notes you want adds quite a bit more flair than just playing the notes of the solo. The guitar got a bit of an update so you can wail on the higher frets during a solo to make it extra cool. This is also where you perform tapping—you’ll hold a high note, then tap the other high notes for a fantastic sound. All of these things have a symbol of sorts during the solo—free style is diamonds on the board, tapping is diagonal notes, etc. It’s a ton of fun and it’s worth picking up in October.

With all the huge announcements in this E3, it’s tough to leave the floor when I won’t get a chance to see it again until next year. While I did get to play or see some fantastic presentations on many a game, I don’t get to play them again until they release. These have been an amazing three days that are over way too soon, but know that there are some amazing things headed our way this and next year. Until next year, this is goodbye to all those great games I can’t wait to see again.