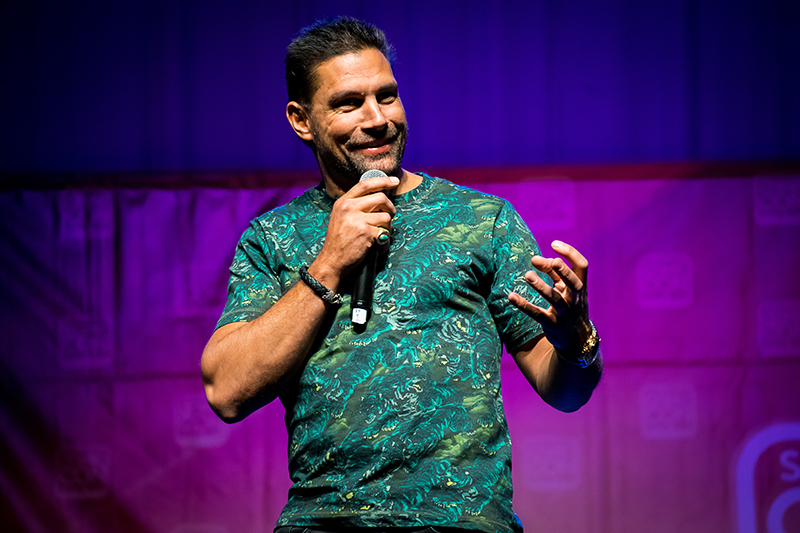 Learn How To Make People Uncomfortable In America With Manu Bennett!

Panels can sometimes start weird here at our little Comic Con of awesome. I was in the panel early listening to Dan Farr talk about their Manu Bennett stories—one of which involved a cat scratching the shit out of Bennett. That’s not the weird part, though, he mentioned that if (like it’s a distinct possibility) Bennett takes off his shirt during the panel you can see the scratches. I’m going to let you down right now, that didn’t happen and I was extremely disappointed—it’s fine, there’s Spartacus for that, but I wanted to see it person.

It gets better, Manu Bennett demonstrates the custom of hongi on stage with one of the members of the Comic Con crew. You touch foreheads and noses together and then inhale at the same time—they call it sharing the breath of life. It’s a beautiful greeting in New Zealand where Bennett hails from, but a weird one here and showing the crowd and awesome new custom to introduce to their friends was a good way to start the panel.

After the cultural lesson, we moved on to the questions—mostly centered around Manu Bennett’s roles in Spartacus and Green Arrow. Crixus was the one he related to most, and his reasoning is a sad. Bennett lost his mother in an accident that almost took his life as well, but instead put him in the hospital for weeks. When he woke up, his worst enemy was there, making sure he was okay. Turns out, they now had a tragic common backstory and they grew to be best friends, similar to what happened in Spartacus—realizing your enemy may end up being your friend in the end.

There were the happy stories too, though. The walk Manu Bennett had to do in order to make Azog the menacing presence he is looks much funnier on a person his size. He also talked about how excited he is for his new project Shannara Chronicles in January—mostly because he finally gets to play the good guy. It started weird, but ended strong