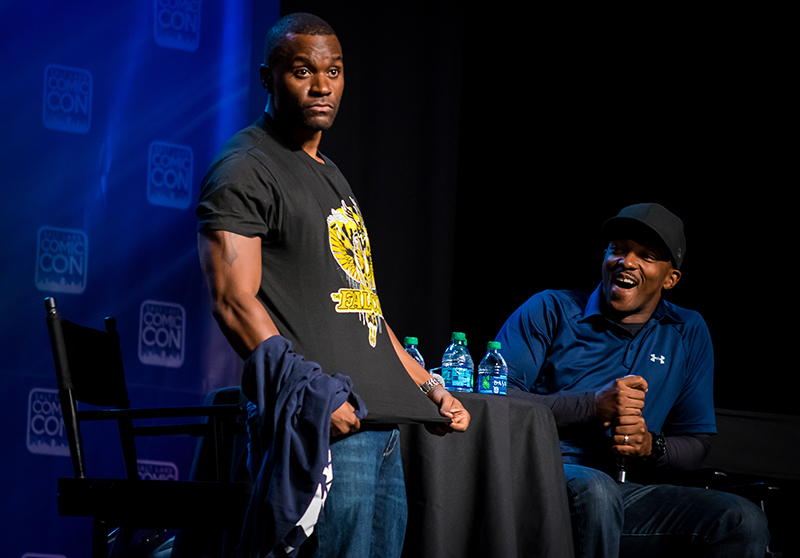 Its funny how the later things get, the looser and more laugh-driven Comic Con panels become. This panel discussed the inclusion of the Inhumans into the Marvel on-screen universe and the announcement of the an Inhumans movie coming in 2019. The crux of the panel’s conversation was mostly about how this Jack Kirby creation was pretty ridiculous and how if it weren’t for the enormous success of Guardians of the Galaxy, another ludicrous Marvel property, that a cinematic attempt at the Inhumans would seem impossible. The panelists speculated about whether Marvel was attempting to replace the long-time popular mutants and their team of X-Men, whose movie rights are owned by Twentieth Century Fox. Focusing on something they do have to movie rights to, the Inhumans, seems like a valid move. Things circled back to absurdity of these characters and how the real name of Blackbolt, leader of the Inhumans, was Blackagar Boltagon. Given the outrageous unimaginative name, panelist and comedian, Jay Whittaker claimed the moniker “Black-a-gar” for himself, and laughingly threw off his “slave name” of “Jay” by crossing it out on his paper name plate and writing in his new designation. The character of Lockjaw also was brought up by Shannon Barnson who thought a giant, teleporting talking dog will be a spectacle to see on the big screen. He and fellow panelist Trent Hunsaker thought of the Terrigen Mist, the mist that all Inhumans must pass through to receive their powers, as a crap shoot—you don’t know what power you’re going to end up with. The entire room was rolling in hysterics and civility was only reclaimed by panelist, McCord Larsen’s detailed telling of a preview scene that was just released from the new season of Agents of Shield and from that highly specific description, the conversation became about how the Inhuman elements on Agents of Shield are keeping that show interesting. As time began to run out the audience was asked for questions and young boys stole the rest of the show by asking, who was the panel’s favorite Inhuman. Lockjaw and Blackbolt seemed to be tied for the honor.