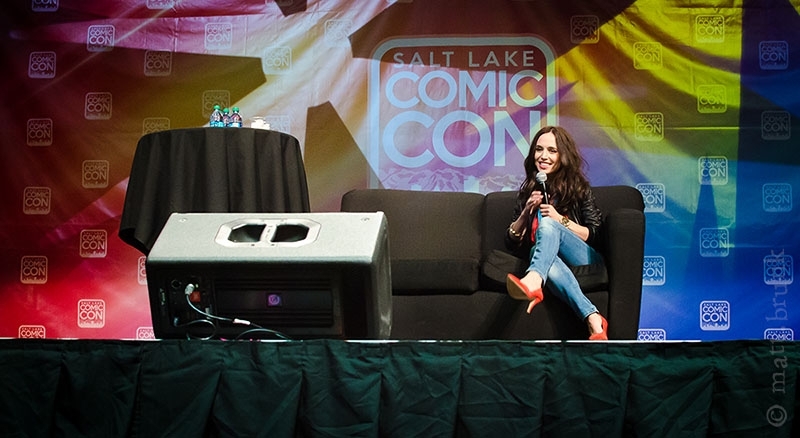 Eliza Dushku was ridiculously bubbly and engaging. She greeted every attendee with a flirty, “Hi!” and seemed to thrive under the attention. Photo: Matt Brunk

I have loved Eliza Dushku since in Bring it On. I wish I could say it was from Buffy the Vampire Slayer, but sadly, I was a latecomer to the Buffy fandom. Most of her beloved roles are strong, bad-ass chicks, so I was expecting a bit more of an aloof interview.

I couldn’t have been more wrong—she was ridiculously bubbly and engaging. She greeted every attendee with a flirty, “Hi!” and seemed to thrive under the attention. I can’t express how effing awesome she was—her smile was infectious and she’s downright charming. At one point, she talked about her family in St. George and she had the audience say “Hey.”

A good deal of the questions centered around her role as Faith—who she enjoyed beating up the most (Buffy, duh!), Team Angel or Team Spike, that kind of thing.

About halfway through, Dushku brought on a special guest—Judy Dushku, her mother. It was a sweet moment, and Judy offered a very different perspective on Dushku’s fame. Dushku’s parents never really wanted Eliza in acting, but knew better than to say, “absolutely not”—once they realized the acting bug wasn’t letting go of Dushku, they threw their full support behind her.

Judy had a great story about being on the site on True Lies. Judy watched Jamie Lee Curtis as she greeted all of the staff members, and while she was acting, she told little Dushku to watch and emulate her. According to Judy, Curtis always knew where the power was and knew to never let anyone steal it. This led to a story from Dushku about Curtis flashing her co-workers when they would make inappropriate jokes to get them to lay off.

The Dushkus also promoted their charity. Judy is the founder of Thrivegulu—naturally, Dushku is involved—she’s on the board of directors with her mother.