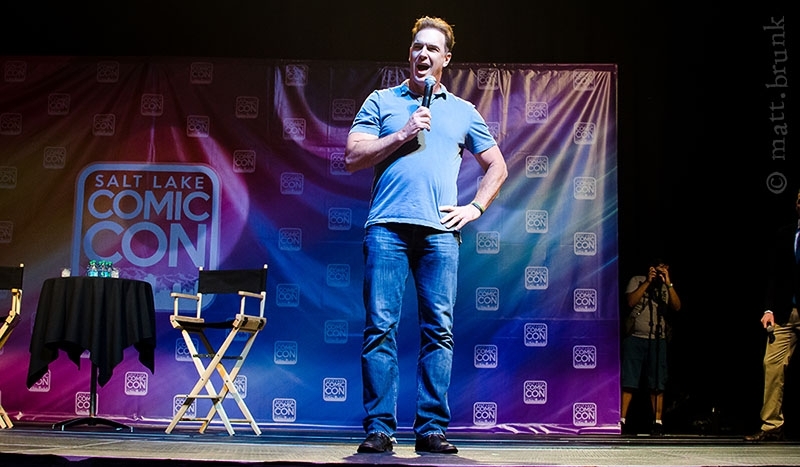 The best part of Patrick Warburton's panel was him pretending to have a conversation as all of his characters. Photo: Matt Brunk

Patrick Warburton has a voice you would know anywhere. He’s a big part of why I loved Emperor’s New Groove and I remember loving watching The Tick as a kid. I was a little sad that he couldn’t comment on the Amazon revival on the series, but there were plenty of other things to talk about.

Warburton is one of those guys that has very long-winded, but interesting answers to audience questions. He’s a pretty affable guy though, and let’s be honest, hearing him talk about anything for an hour is fantastic with his deep, baritone voice. He did a good number of high-fives and fist-bumps throughout the panel, and sweetly offered to do a short video for a woman’s sick husband who couldn’t make it to the show. An audience member asked who, out of the characters he’s portrayed, would he play poker with, and Warburton answered the question (Kronk and David Puddy since they’re not all that bright) and then went into a story about how he won a poker tournament his first time playing. Like I said—long-winded, but interesting.

Since Kronk is one of his iconic roles, he talked a lot about how he grew up with Disney and how awesome it was to do a movie with their great animators. He loved the older Disney movies, like Sword and the Stone.

For all you Venture Bros. fans, Warburton said Brock Sampson will be around in the new season, but he wasn’t specific as to what capacity.

The best part of his panel was him pretending to have a conversation as all of his characters. He was a great way to close out day two of Salt Lake Comic Con.