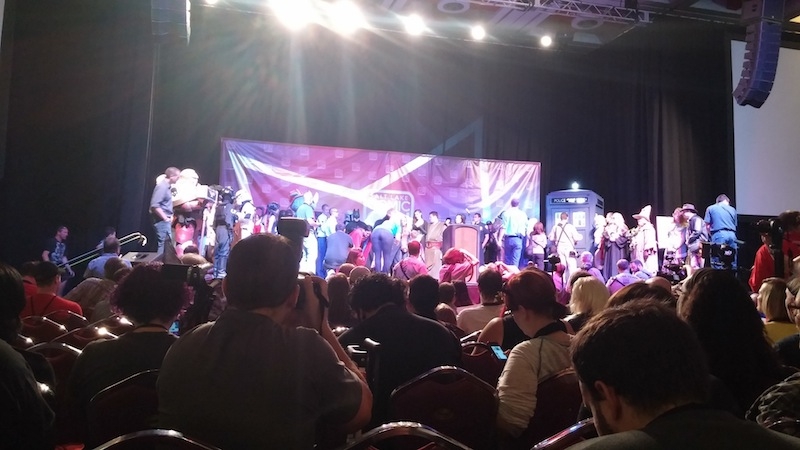 Bryan Brandenburg and Dan Farr, introduced by Lou Ferrigno, kicked off Salt Lake Comic Con 2014 with a bang. The two packed the opening presser with celebrities from every genre of nerddom they could get their hands on. From Jason David Frank to Neal Adams: artists, voice actors, costumed heroes and television stars came popping out of the Tardis to start the the engines of fan celebration. It would not be an event in Utah, however, without the Jazz Bear throwing swag to the crowd of eager press hoping to get the last minute scoop on the upcoming festivities.

This press conference traded the awkward opening speech from Governor Herbert (Fan Xperience, Spring 2014) for the incredible charitable wizardry of Manu Bennett. As Bryan Brandenburg discussed SLCC’s commitment to helping charitable organizations and growing the community while remaining profitable, Mr. Bennett committed his first $1000 earnings to a young girl with leukemia, urging other celebrity attendees to do the same. The touching moments were followed by exuberant pros sharing their excitement for the weekend to be. A personal favorite was Pokémon-voice actor Veronica Taylor lighting up the room with Ash Ketchum—“Salt Lake Comic Con!!! I choose you!”

Not everything was excited words and high-fiving—there was also a short intermission to sing happy birthday to Jason David Frank and a beautiful Journey interlude led by Vic Mignogna. This marked the first time that I have witnessed a sing-a-long at any press event, and could quite possibly be the only sing along in press event history. Continuing the trend of slightly off-kilter press conferences, Rob Prior also painted an incredibly eerie Joker in the background on a timer of 13 minutes, which was then gifted to a sick little girl. While the gesture was touching, it felt odd that the terrifying painting went to the youngest girl on stage.

A few statistics were shared and it is speculated that SLCC is poised to have 130,000 in attendance this year holding its spot in the top 3 geek gatherings within the U.S. The convention crew also gave away 15,000 passes to teachers, military, police and others, making them one of the most caring groups to date as well. This convention has more to experience than any one person could take in over 3 days, but it seems after the opening event trying to see it all, is worth your while.