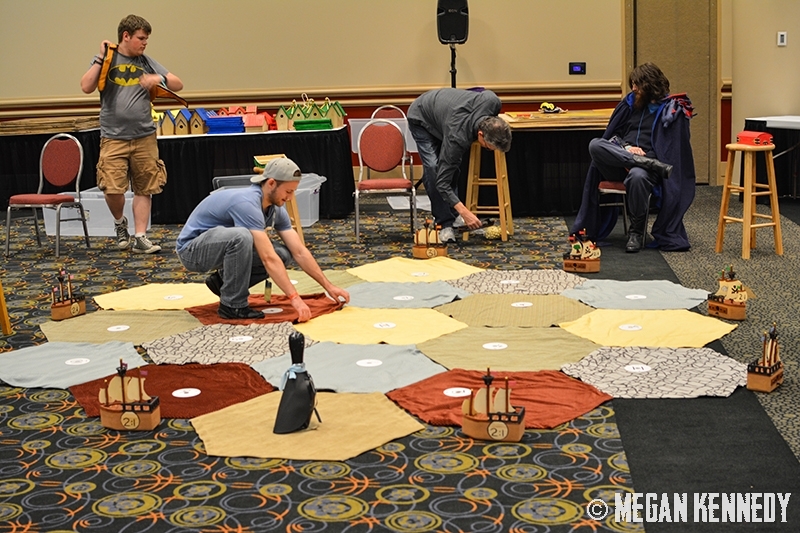 Players set up a giant version of Settlers of Catan in the Game Room. Photo by Megan Kennedy (abuseofreason.com)

Reaper Paint & Take
Reaper Miniatures are basically the biggest company in all of miniature hobbydom, and when I visited their booth in Meeting Room 155, I got to check out their “Paint & Take” activity. As it turns out, this was basically the best cure for the raging headache that often follows an extended time spent wandering the Exhibit Hall. This free event begins when you select one of a small variety of Bones figurines and find a seat at one of many tables set up around the booth. Volunteers will bring you water and a paintbrush, and each table has an impressive variety of Master Series paints for you to use.

I’m no stranger to painting miniatures myself, but the amount of brand new painters grouped around me was very encouraging. Some would simply slap on a quick basecoat and dive back into the swirling chaos that is Comic Con. Others took a little longer than their hour allotment, painstakingly detailing and highlighting their tiny figurines. Virtually everyone who sat around me kept saying how relaxing it was to take a break from the noise and crowds of the Exhibit Hall and simply paint.

The Bones figurines are always a joy to paint. They’ve got a surprising amount of detail relative to other plastic models, and even though they don’t have quite the variety of Reaper’s pewter models, you can still find just about anything you need in their durable, bendable polymer. What I was most surprised by was the Reaper line of miniature paints that were available for anyone to pick up and use. I’m a bit of a paint snob when it comes to minis, but now that I’ve gotten some brush time with them, I’m starting to consider getting myself a nice set of Reaper paints. They go on smooth and thin, taking a couple of layers to reach their full vibrancy and color. As somebody who routinely encounters paints that are too thick and clumpy, this was a welcome surprise.

If you’ve never painted a figure before, and you just want to give it a shot, nothing should stop you from swinging by the Reaper booth. It costs you nothing except time and a little bit of concentration, and at the end, you have a tiny piece of art that feels personal – even though it came out of a pile of virtually identical models.

Shannon Stiltz
Right next to the Reaper booth sat Shannon Stiltz, who used to be one of Reaper’s professional painters. She has since left the company to pursue her own business, which deals in custom miniature painting, contract pewter casting, and unique pieces of jewelry. Arrayed before her on the table was a smattering of miniatures from different studios, some of them painted in her signature style. The amount of detail she can get out of her pieces is truly extraordinary, and even the ones she referred to as “tabletop quality” (jargon for “looks good from a distance”) were meticulously painted.

She started off 10 years ago in the mailroom at Reaper HQ, mailing out sculpts to geeks like me. However, as she started working more closely with the official sculptors and painters, she became more proficient at the hobby. As kids came by her table, they often remarked that they “could never paint anything like that.” However, she was quick to correct them on that point. “My first few figures were terrible,” said Stiltz, wishing she had brought them along to demonstrate. Even now, she aspires to reach a painting quality that would put her into the top 5% of painters – the kind who enter and win model-painting competitions.

When I asked Stiltz about what she uses to paint, she told me that she primarily uses three varieties. The DaVinci Series of sable brushes are her main squeeze, but she’s also a big fan of Reaper’s kolinsky sable brush series, which combine high quality with a reasonable price tag. She also uses the popular Series 7 brushes, which are pretty much the industry standard for a kolinsky sable brush. Her favorite figures to paint come from Reaper, Dark Sword, Wyrd, Privateer Press, and Games Workshop.

It’s always reassuring to see people who have been in the industry, and to realize how humble and accepting they are of the novices in their hobbies. Just seeing Stiltz talking with the young kids and admiring geeks arrayed around her booth was a heartwarming experience. While she may aspire to yet greater heights in her painting career, her attitude of humble encouragement is sure to inspire many future painters who wish to follow her on the path to the top 5%.

You can find her website at queenpenguin.com, where she performs commissions. If you’re looking to have the coolest-looking figurine to represent your character at your next RPG session, or even if you want to have the most imposing army of mechanical nightmare engines in your local tabletop wargaming group, you need to check out Stiltz’s work!

Giant Tsuro
Once I’d gotten my paint fix, it was time to start wandering around the room to see what other activities were available. While there were Magic drafts and RPGs to be played, I decided to go for a more traditional board game experience. An enthusiastic volunteer called out that he was looking for three more players to try out a game of giant Tsuro, and I simply couldn’t refuse.

Now, I have played Tsuro before, and I enjoy the game’s simple, whimsical structure. You play as a traveler who is attempting to continue following a path without falling off the edge of the map or running into another player. To play, you put down tiles that have different routes on them, rotating them to send you spiraling across the board. All told, Tsuro is probably the easiest board game out there, and it doesn’t have the depth available in other euro games. But when all you want to do is see how ridiculous your path can be without careening wildly off the edge, this game is a blast.

The way they had set this game up involved huge wooden boards that represented the tiles. We all walked around as our own game pieces, which was a pretty fun change of pace from the original game. The boards were large enough that we could all stand on them comfortably, even though we had 6 players running around, and in the end, we had a three way tie for the win.

Going on right beside us was an oversized game of chess, and an enormous game of Settlers of Catan. It’s pretty impressive to see the amount of time and craftsmanship that went into constructing these games. I was especially blown away by the fact that the trading ships were fully modeled out and hand made, and each city and settlement was represented by birdhouses of different colors and sizes. If you’re a euro gamer at heart, you need to check this out.

Magic Draft: featuring Brandon Sanderson
Immediately after I saw the signups for the after-hours Magic: the Gathering draft with Brandon Sanderson, I had to make sure my name was on the list. Sanderson is one of the rising stars of fantasy literature, and his Magic skills are the stuff of legend. After I waited around for a little while with some of the others who had signed up, he joined us and explained the absurd drafting format that was to follow.

For those of you who aren’t familiar with Magic, drafting or even trading card games in general, a draft is like a free-form version of Magic. You select single cards from booster packs as they go around the table, and try to create the best deck you possibly can from the cards you pick.

For those of you who are familiar with Magic, the format we played was absolute chaos.

Half of the players were invited to play at Sanderson’s table, where we were drafting the soon-to-rotate Return to Ravnica block. However, we also added a single Conspiracy card to each booster that went around the table, making the experience far more enjoyable.

The other half got to draft the base Conspiracy set, but as Sanderson is never content with such simplicity, each player added an Un-set card to each pack. To those of you who don’t know or remember Unglued and Unhinged, these sets were comprised of joke cards that played on the tropes and mechanics of Magic. Combining these with the draft-warping silliness already inherent in the Conspiracy set was like throwing a nuclear bomb onto a bonfire.

I sat at the Return to Ravnica table with Sanderson. My draft started off pretty weird, and I was forced to switch colors with surprising frequency. However, with the aid of a few off-the-wall conspiracy cards, I was able to make a Bant (White, Blue and Green, for the uninitiated) deck with a strong Selesnya-fueled token theme. If I’ve already lost you, then just think of my deck as a random assortment of zoo animals bursting out of the trees and stampeding over my opponents. The entire time, Sanderson was making some great color commentary, making all of us worry that he was secretly assembling some sort of world-ending doomsday device.

After the draft, we all played our games on into the early morning. I managed to defeat the five-color monstrosity that Sanderson had whipped together, ultimately attaining victory by pulling the mother of all topdecks – an enchantment which sent one of my giant creatures flying right past his defenses and hitting him for just one more than his remaining life total.

Sanderson was a formidable opponent, and I was extremely grateful for the chance to sling spells with such a masterful wizard. If you want to learn more about him, his fantasy novels, or just want to find out where he will be playing his next event in Utah, check out his website at brandonsanderson.com and sign up for his mailing list!