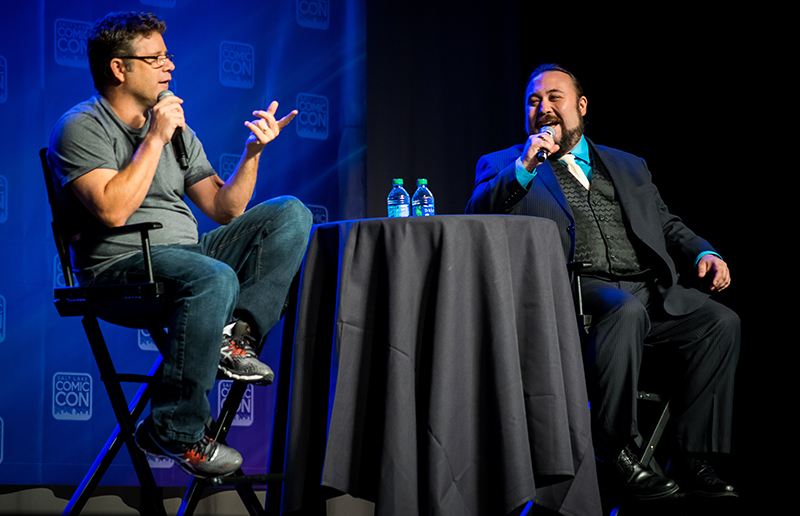 Sean Astin has become one of my favorite actors/celebrities over the past few years. Last year, I interviewed him for FantasyCon and he is just the nicest guy. He feels like your friend’s really cool dad that wants to sit around tell stories about his awesome adventures all the time—you don’t really get the celebrity vibe from him. He does know how to make an entrance, however, as he came in through the aisles on his golf cart—high-fiving everyone he passed. Sean Astin is a little long-winded, but that just means he paints the most beautiful behind the scenes stories you’ll ever hear about Lord of the Rings. 15 years have passed since they started filming the behemoth series, it’s still ridiculously iconic and reminiscent of a better time—when book trilogies were made into a film trilogy instead of tacking on that extra money-grabbing fourth movie.

Astin’s big focus for the first little bit was to talk about his charity work—he was born to make inspirational speeches. I would’ve given him all the money I had on me if I didn’t need it for his autograph later. The first charity he talked about was a cool program that gets kids into running clubs after school. Sean Astin could sell ice to Eskimos. It’s all about running for something other than yourself, it’s called the Run3rd campaign. The other one is for the book geeks out there—Sean Reads Aloud. It benefits their literacy scholarship fund, and if you love listening to Astin talk and do voices, this is for you—he’s narrated a few chapters for you to preview.

When we finally got to questions, we were only able to go through a few before someone asked about the touching moment where Sam offers to carry Frodo up the mountain—that was the longest, but best told story about LOTR I’ve ever heard. He set the scene—where they were, the long hike to get to the shoot and how happy he was to finally have more than one line for the day. He practiced his lines with Elijah Wood way more than he needed to—not just because he wanted to get it right, but because he loved the language and how the words flowed. It’s a beautiful scene in the movie, and apparently it even made Peter Jackson cry. He let Sean Astin do the scene more times than necessary. I can’t do it justice, but it’s a beautiful story and it just makes me love the guy even more.

Read More: You can check out more Comic Con stories like this one about Sean Astin on SLUG’s Salt Lake Comic Con coverage page!