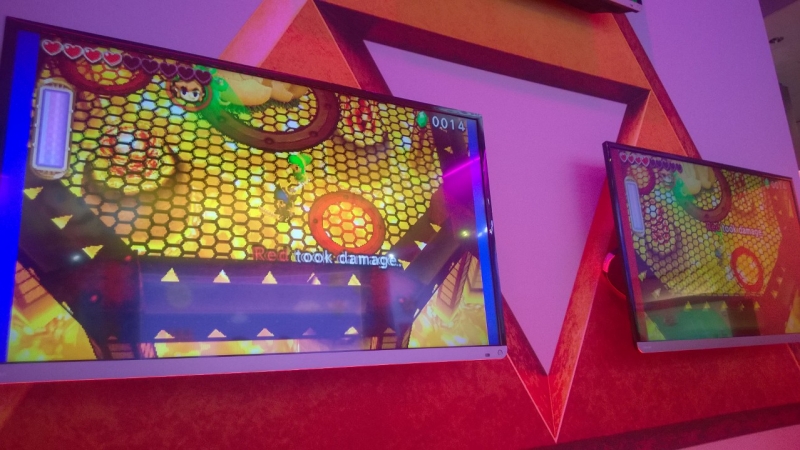 The one thing about E3 that still blows me away is the sheer size. The big names—Sony, Microsoft, Nintendo—take up almost the entire West hall of the convention center, with a few smaller developers filling in the corners. I ended up spending the entire day on just this side of the hall and I still didn’t see every game. The amount of gaming in each section is insane—it’s not just the big name games that take up the space, it’s all the little indie games that fill up the floor space. Nintendo is the exception to this—just about everything on their floor was first party, with a good chunk of their space going to Super Mario Maker and a stage dedicated to 30th anniversary antics—including Charles Martinet, the voice of Mario and other Nintendo characters making an appearance. I worked my way through most of the 3DS games Nintendo had for show and I can’t wait to play more.

Growing up with Nintendo, I fell in love with platformers. Chibi-Robo! Zip Lash has some awesome mechanics and high-quality 3DS graphics, making it a platformer I can’t wait to own. There’s a charming atmosphere about the game—I couldn’t stop smiling while I was playing it. There’s a good amount of detail in the backgrounds, but the graphics could be a little smoother. It didn’t detract from my enjoyment, but it was enough to be noticeable. As you wander the world, you pick up energy balls that help your reach, you clean up random trash and beat up baddies. The little robot uses his plug to take out obstacles and enemies—he can do a quick lash out or build it up so he can throw it farther. Once you get enough energy, you can actually bounce your plug around to new heights or to knock out a ton of enemies at once, which is extremely satisfying when you figure out the right angles. It’s set to release in October, bundled with an adorable Chibi-Robo amiibo. I just hope Nintendo ships out enough bundles to meet demand. Chibi-Robo! Zip Lash is slated for release on December 31, 2015.

The Legend of Zelda: Tri Force Heroes lets you play through a Zelda game with your buddies, and it’s a fantastic idea. While you can do it online, it’s definitely in your best interest to be in the same room with each other so you can brainstorm together. If you can’t get the gang together, Nintendo has added some cute little animations to attempt to communicate with your friends—the cutest of which is Link cheering you on with pom-poms. Some of these animations have clear meanings—come here, don’t do that, good job, etc—but they’re mostly there to be cutesy. The other fun thing you can do with your friends is Totem Time. You can pick each other up and move as one—this opens up a whole slew of fun dungeon and boss mechanics that works out well. It looks great on the 3DS and it made me want to puzzle out the game with my friends. The Legend of Zelda: Tri Force Heroes is currently slated for a Fall 2015 release.

I didn’t get very far into the description for Goliath before I was sold. You crash land on planet where the only way to really survive is to build giant robots to fight in and/or for you. Who doesn’t want to build their own giant robots? Sold. The game is obviously a little more complex than that—there are a ton of customizations for your mech and there are a few different types of mechs you can build for every environment you encounter. As you explore, you’ll run through deserts, forests, wintry wonderlands and everything inbetween—all of which have an effect on your mech. A wooden mech, for instance, will catch on fire if it’s out in the desert too long because of the heat. A stone goliath in the same situation will also get hot, but it works in his favor by adding fire damage to his attacks instead of burning him to death. The customizations give your mech all sorts of cool weapons and special abilities—all of which you gain through obtaining blueprints through quests and helping out the factions. I adore the art style and the general atmosphere. They’re releasing in early 2016 on PC, and they may do a modest Kickstarter to get some funds for extras, like console versions and fan requests—It’s a game you need to keep your eye on.

It was a hectic day one on the show floor, complete with lines and sweaty people. There’s so much to see, so much to play and so little time—three days isn’t nearly enough. There’s an entire half I haven’t seen yet and that’s where my day will begin tomorrow—after Super Mario Maker and Star Fox Zero. Those look too cool to miss.
Photos: