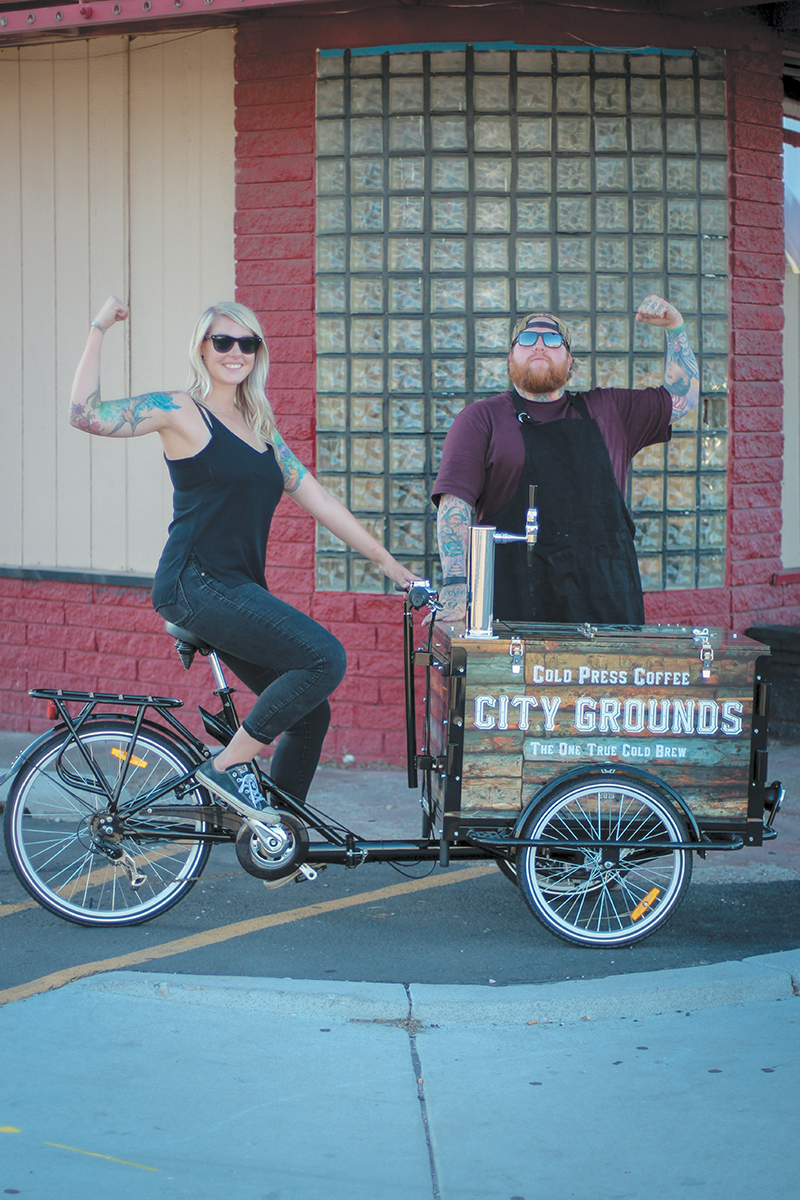 Caffeinating the crowd with their nitrogen-infused cold-brewed coffee, City Grounds SLC is a popular mobile coffee shop. Patrolling Liberty Park, festivals, food truck rallies and late nights after the bars close, City Grounds pedal their brew from a custom-made tricycle fitted with a nitrogen tank and refrigerated cooler. The nitro tap imbues a deeper flavor and creamier mouthfeel to the cold-brew, comparable to a Guinness Stout.

The good flavor of City Grounds’ coffee starts with the brewing process. “Our cold-brew coffee is never heated,” says Benjamin Martinez, one half of the duo behind City Grounds  with girlfriend Alysia Erickson. “The beans are ground really coarse, so they don’t heat up too much. Then we steep huge batches of the ground beans for an undisclosed amount of time. After we steep the grounds, the finished product is extracted. Brewing it cold retains flavor of the coffee and doesn’t release the acid in the beans. It’s good for people who love coffee but have acid reflux or sensitive stomachs. It’s also caffeinated a little more. Well, considerably more.”

Last year at the Craft Lake City DIY Festival, City Grounds was slammed with customers before the doors opened to the public. Vendors and volunteers were clamoring to get their hands on cold-brewed coffee, the perfect way to beat the heat and caffeine up. When it comes to the DIY Festival, you’d be hard-pressed to find a more enthusiastic participant. “[The] Craft Lake City [DIY Festival] is the Super Bowl of Utah’s DIY scene,” says Martinez. “These are our people. This is our community! I love downtown Salt Lake City. I love the people here.” Although he keeps the brand of the coffee beans he uses under wraps, they’re local, too.

If you’re craving a caffeine fix and can’t track down City Grounds, look no further than Good Times Tattoo, where Martinez works. You can buy bottles of cold brew as well as growlers. Follow City Grounds on Instagram for giveaways and news about the traveling cold-brew coffee this summer.