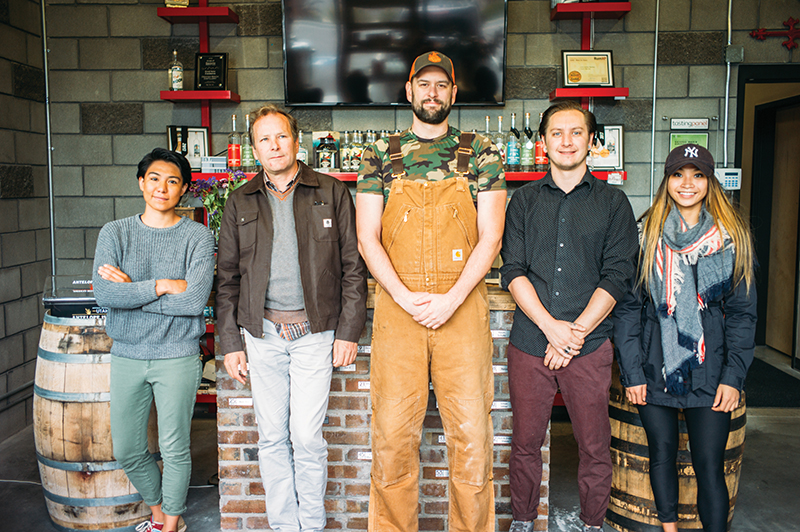 The history of Dented Brick Distillery reads more like a Western novel rather than the founding of one of Utah’s fastest-growing purveyors of fine spirits. A series of events set in motion over a century ago during the Mormon-pioneer era culminates on a “piece of land that was destined for whiskey,” says Dented Brick’s VP of Outreach & Engagement, Karina Soriano. Starting with the drilling of an artesian well that accesses some of the purest water—an essential ingredient in quality liquor—to the construction of the small brick house whose porch would be the scene of a gunfight with the police, the property on 3100 S. Washington has a sorted past. It’s well-known that booze is a major contributor to the economic development of Utah since the mid 1800s. Pioneers loved their libations and it’s an interesting coincidence that this very same land provided the water for the state’s first distiller on record, Hugh Moon. Even ole Brigham Young would wander onto the premises to procure a bit of hooch for “medicinal purposes.”

Flash forward to the year of our Lord 2011, to a group of drinking and skiing buddies throwing back a few drinks and telling stories. A serial entrepreneur and visionary, Marc Christensen, would step up and decree “Let’s build a world-class distillery in Salt Lake City … and if we never make a dime, at least we’ll know one thing…we will forever drink only from the finest hand-crafted spirits from Utah.” Through trials, tribulations and the divine acquisition of the land on 3100 South, the roots of Dented Brick began to proliferate. Christensen and his partners demolished the old house and saved the dented bricks to include in their 21st-century façade that now houses the latest distilling technology.

Under their new roof, the top-shelf talent at Dented Brick collaborates to produce a wide variety of products and cultivates a “grain-to-glass” ethos that’s core to their brand. “Spirits bring the community together,” says Channalyn Tek, VP of Business Development and Investor Relations. From the raw materials of regional grains, artesian water and yeast starters to the hand-crafted barrels for aging on through the bottling process, these folks have their hand in every stage. That level of quality control is responsible for the amazing flavor and tasting notes that characterize the various liquors that come out of this facility.

Catching up with Head Distiller Mike McSorley between batches, he takes us through the intricate process of distillation, and it’s evident that this truly is an antique art form. If the machinery were an accompaniment of symphonic instruments, McSorley is the maestro who teases out various melodic harmonies, ending in a crescendo that pleases the taste buds and relaxes the mind.

The mashing process is the starting point, and its contents are then pumped over to the continuous column stills where the useable alcohol components are captured. The resulting low wine is sent to the batch still. Dented Brick’s is a work of metallurgical art from Vendome Copper & Brass Works, or as McSorley says “the Rolls Royce of American still manufactures.” This is the portion of the process where the real work begins. “We collect the best ‘heads’ and take the ‘tails’ and put them in for redistillation to then collect later,” says McSorley.

Understanding the vast nuances of the machinery is just the beginning. A head distiller needs to understand not only the mechanical and electrical components of the equipment, but they must have a firm grasp on the physics that goes on throughout the process. It’s evident that McSorley has a robust background in the inner workings of these aspects, owing his tutelage to working in distillation strongholds from Washington to Hawaii.

“We also allocate some of our product to aging, roughly half. The quality of the spirits we produce dramatically impacts what comes out of the barrels later. The alchemy component of what occurs in the barrel is interesting. The organic elements are not fully understood, but there is increasing insight into how to speed it up,” says McSorley. Accelerated aging would allow distillers to effectively recreate the same product that would take years of barrel or cask-aging to produce. Shortening the process has incredible monetary incentive, and McSorley admonishes that there may be a day when the tastes would be virtually indistinguishable—maybe. To him, the challenges of creating products like the Hugh Moon Whiskey are what keeps the profession engaging.

“Distilling 100 percent-pure rye from entirely unmalted cereal grains is quite a technical challenge, and I view that as my greatest triumph as a distiller here in Salt Lake City,” says McSorley. Taking the product through the aging process is already underway at the facility. Dedicated drinkers can actually adopt-a-barrel through a program where they invest in a signature barrel that will produce up to 200 bottles of whiskey in the next two years. An attractive return on investment exists financially and spiritually, not a bad use of funds in this tumultuous economic climate.

While the whiskey may prove to be his spruce goose, McSorley is truly a lover of gin. That comes from his background as a globe-trotting craft-cocktail maker, and he loves combining myriad flavors to create a concoction that really wows. He is particularly proud of their well gin, a passion product that strikes a chord with bartenders around the nation. In a creative context, that is the spirit that he’s gotten the most mileage out of. After trying the Dented Brick Gin, it jumps out as my new favorite, especially at its price of $11.99 for a fifth.

If you are intrigued in Dented Brick’s people, process, and product, you owe it to yourself to make your way down to their tasting room. Set among the inner workings of the distillery, you can learn more while imbibing some of SLC’s finest. Don’t forget to check out their latest Antelope Island Red Rum, aged in cabernet barrels from Hell’s Canyon, Idaho. Cheers!