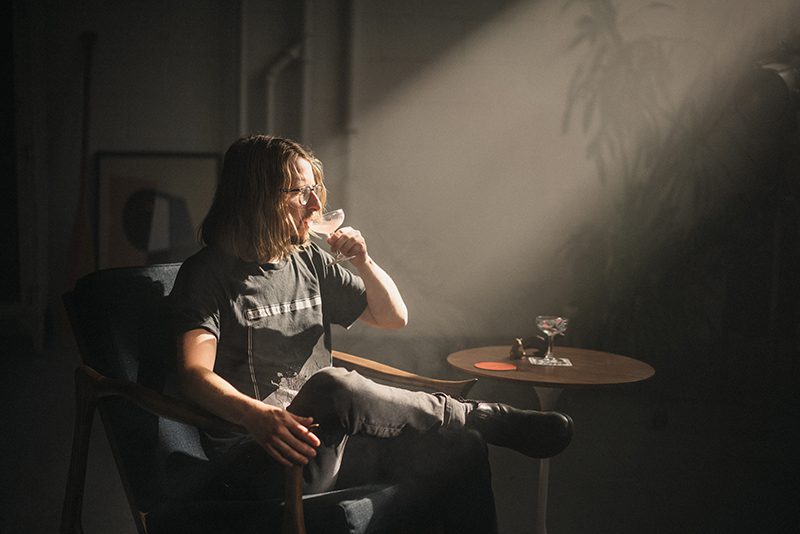 Who knew that being a crybaby wouldn’t be such a bad thing? Cody Kirkland, creator of Crybaby Bitters, has transformed his experience in coffee and interest for making cocktails into a business in which he handcrafts his own signature line of unique bitters, punched with personality and pizzaz. Bitters are, essentially, a flavoring that can be used in a variety of different drinks. They are typically made with high-proof liquor and different botanicals, making the medium completely customizable for the creator. While they are most popularly used in cocktails and bartending, the component has found its way in the coffee scene—appearing in lattes, teas and sodas.

After spending about a decade as a barista and manager at The Rose Establishment, Kirkland found himself tired over working with water, milk and coffee. This encouraged him to branch out into the world of cocktails, and while he didn’t have plans to work at a bar, he wanted to learn everything he could about the craft. “I studied spirits, cocktails, wine, beer and bitters on my own by reading everything I could and drinking everything I could handle,” Kirkland says. “Since I couldn’t make cocktails at The Rose, which doesn’t have a liquor license, I tried making cocktail-style beverages with the ingredients I had around and using the same flavor-balance concepts as I would when experimenting with cocktails: bitterness versus sweetness versus strength, or sweetness versus acidity.” This would catapult Kirkland into making bold specialty tea and coffee drinks, and experimenting with fruit-based sodas, in which he would try to emulate the flavors of classic cocktails without alcohol. “I dabbled in fat-washing tea and drink clarification—something I wouldn’t have been able to do with alcohol while working in a bar in Utah, due to liquor laws.”

The Rose Establishment hosts many private parties and weddings, and often, Kirkland would be the one behind the bar. After a few years of trying his hand at developing new drinks and experimenting with different techniques, Kirkland’s transition to making bitters

on a commercial scale was a piece of cake. “Since starting Crybaby, I haven’t spent any time developing coffee and tea-based drinks. I’m just a coffee-shop regular now,” he says. “Kiki Sieger, who now runs the beverage program at The Rose Establishment, has been making some really cool drinks with my bitters.”

It all started with the Bay Leaf Bitters, Kirkland’s first perfected flavor. He started developing his recipe in 2016 and would bring different versions of the formula to The Rose to test and share with the closing baristas after hours. “Adrianna Pachelli, the Director of Education at Caputo’s and someone whose palate I respect, was a regular at the cafe, and I would give her samples in exchange for honest criticism. Her responses gradually went from ‘This is pretty good’ to ‘Holy shit, this is really good.’” Seven versions later, the Bay Leaf Bitters has taken its final form as a spicy, orange-y and mysteriously herbal bitters. “The Bay Leaf Bitters works really well in spirit-forward whiskey and aged rum drinks,” Kirland says. “I most often put it in a Manhattan or, if I’m going to a party, I’ll use it in a pre-batched bottle of old fashioned.”

The next goal on Kirkland’s agenda was to conquer a second bitters so he could comfortably launch Crybaby with more than one product. “I wanted the second one to be completely unlike any other bitters flavor and for it to be a crazy color,” he says. “The concept of a fruity, spiced, tiki-style bitters just popped in my head, and I freaked out.” Thus, the Fruit Punch Bitters was born. By combining hibiscus, pineapple rind and different spices, Kirkland landed on his main flavor components. In just a week, Kirkland settled on a final recipe after two test batches. “The Fruit Punch Bitters goes great in most shaken cocktails, especially those with rum. A daiquiri is my go-to use for it—I like to call that a Baby Daq,” Kirkland said. “It’s nice in a martini, too, which tastes like a cross between a classic martini and a Pink Gin. Fruit Punch Bitters in soda water or iced tea is very refreshing, too.”

Crybaby Bitters is, ultimately, a product of Kirkland’s passion and interest in cocktail experimentation. “Mixing together ingredients which other people have made is fun and all, but I like to make things from scratch, and after trying a handful of good bitters, such as Scrappy’s, I thought, ‘I could do this,’” Kirkland says. He started small by making batches of classic flavors and now has his very own brand of unique, specialty bitters that are available for the public’s enjoyment. With branding designed by artist Evan Jed Memmott, Kirkland has his product ready to go.

“As far as cocktails go, I don’t care too much about making innovative, gastronomic drinks anymore,” Kirkland says. “I mean, you’re just drinking for chrissake. I’m way over flexing just for the sake of it. I want cocktails fun and not super serious. And that’s what I want Crybaby to embody: fun and casual and not so serious—but still really, really good.”

Both the Bay Leaf and Fruit Punch bitters are available to purchase at crybabybitters.com.