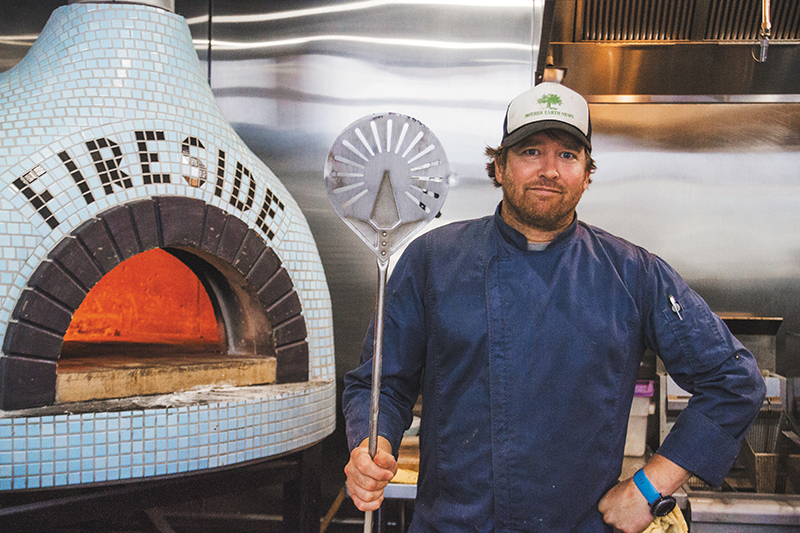 While many people tend to devalue pizza as nothing more than a quick meal, there are a few truth seekers who understand the pure and unifying power that pizza has upon those who know how to fully explore its mysteries. Chef Michael Richey is one of these pilgrims—pizza has been a staple of his culinary career long before he and Scott Evans opened Pago in Salt Lake’s 9th and 9th district. Before moving to Utah, Richey helped launch a hotshot pizza joint called Pizzeria Picco in San Francisco’s Larkspur neighborhood. “When Picco opened up, we got Best Pizza in the Bay Area for four years straight,” he says. “A pizzeria was always kind of a no-brainer for me to do in Salt Lake.”

When Richey opened Fireside on Regent earlier this year, he made sure to bring the same attention to authenticity and the penchant for locally sourced ingredients that he instilled in Picco. It was a risky move to be the first business to open as part of Regent Street’s state-funded revitalization, but Richey has turned Fireside into a culinary beachhead of sorts. Fireside’s Chef Richey still has to compete with Regent Street’s secluded location as well as national chains like The Cheesecake Factory, but that shouldn’t be a problem for long. “They’re on an hour and a half wait and they’re only a hundred yards away,” Richey says, continuing, “It’s a little disappointing when people aren’t concerned about what they’re eating.” Those more familiar with Salt Lake’s metropolitan areas have their eyes firmly fixed on Regent Street, but it’s a location that has yet to gain traction with more casual visitors. Its full roster of house-fired pizza and handmade pasta has imbued the eatery with the kind of reputation that has intrigued patrons of the new Eccles Theater and the Utah Performing Arts Center. “Salt Lake now has the second largest Off-Broadway theater in the United States, and I’m ready for things to pop,” Richey says. It’s also worth noting that Fireside’s location on the west side of Regent Street means that it enjoys a current liquor license. “Whatever is going on opposite us is owned by the Church, so that’ll be dry,” Richey says.

Utah is an excellent place for restaurants to harvest their culinary ammunition, but everyone knows that already. At this point, if you’re a local restaurant and you aren’t serving up locally produced food, then something would be very wrong with your business model. As Fireside does source most of its ingredients locally, it’s not a selling point that Richey has chosen to rely on. “We don’t boast the whole farm-to-table thing, but we’re definitely on trend or ahead of others when it comes to sourcing our food,” he says. “Using the farmers that we use and showcasing all of the beautiful things that they’re doing really sets us apart. I truly think our pizza is the best, and I wouldn’t say that if I didn’t believe it.”

The superior quality of Fireside’s pizza is a gauntlet that Richey is happy to throw down. It’s a confidence born of someone whose restaurant staff makes their own mozzarella and ricotta cheese every day. Their rotating menu of pies features toppings like hen of the woods mushrooms, sunchoke cream, littleneck clams and chorizo, which are prepared with the care necessary to preserve each ingredient’s natural flavor while complementing the homemade cheese.

It would also be a shame to overlook Fireside’s other menu options. In addition to making their pasta dough onsite, they’re taking advantage of Utah’s tasty ingredients by reinventing classic Central Italian dishes like ravioli, gnocchi and bucatini. The menu also veers into contemporary American with its “Urban Picnic” section, showcasing creative share plates like lamb pops and fried squash blossoms. “We’ll have ceviche on the menu, or braised short ribs—we’re all over the place, but I like to think about our food as new or contemporary American food with notes of Central Italy,” Richey says. “We also have a soft serve machine, and we’re doing some killer stuff with that.” Throughout the month of August, Fireside hosted Sunday night ice cream socials that featured specials on their wide range of desserts, which included chocolate and banana cream pie and a wide range of ice cream sundaes. Based on their proclivity to create and host unexpected events like this, it would be well worth it to keep an eye on their menu and schedule. Basically, if you’re heading downtown for a show and you’re thinking of hitting up Cheesecake Factory, do yourself a favor and go to Fireside on Regent instead.