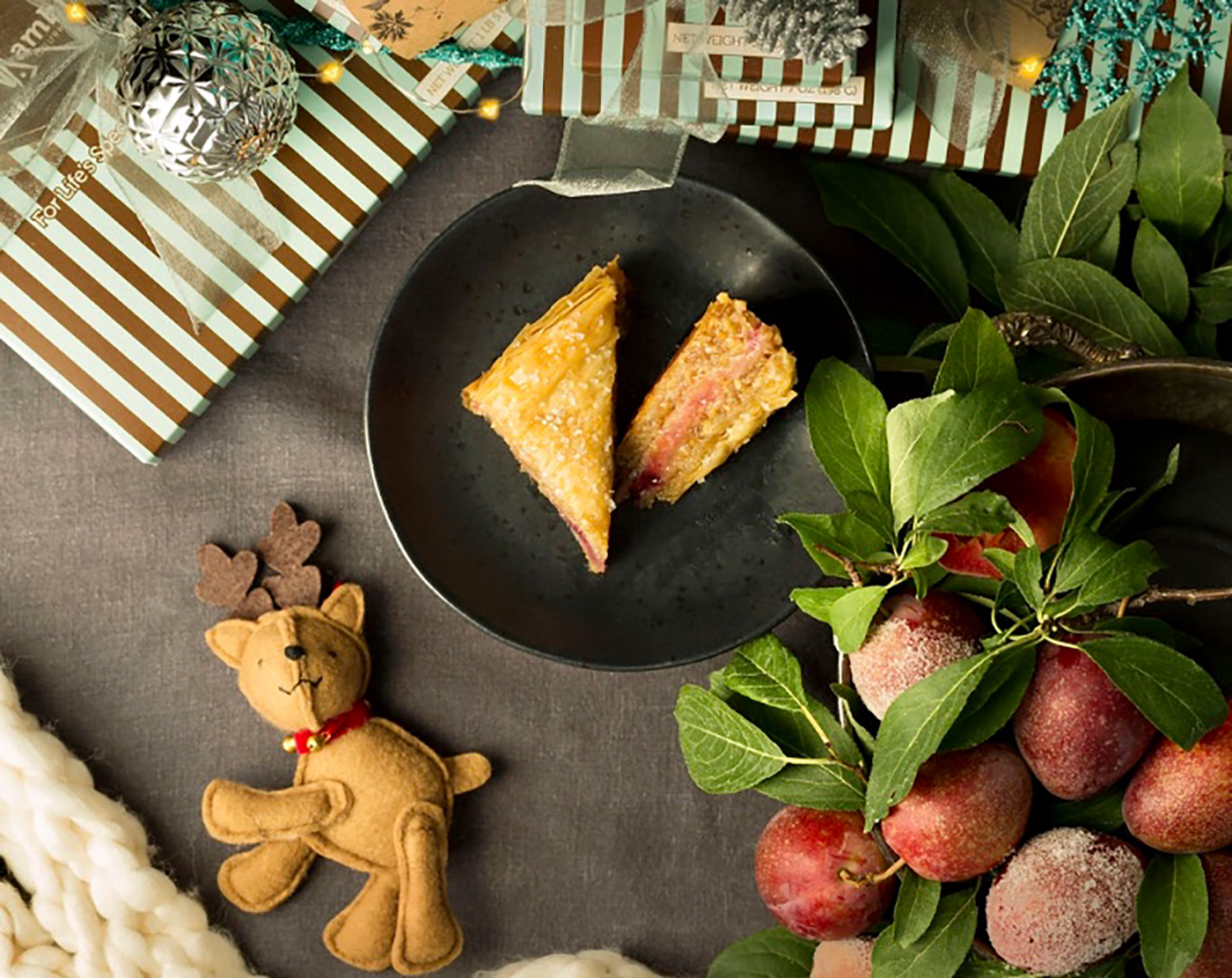 Sheer Ambrosia: The Art of Baklava with Rita Magalde

Rita Magalde of Sheer Ambrosia bakes delectable baklava, a succulent dessert pastry formed of crisp phyllo dough and drizzled with a honeyed sweetness or sugared syrup to hold it together. Chopped nuts mold each layer, and, once baked, the flaky dish crumbles and melts on your tongue with a flavorful duality of earthy walnuts and soaked honey.

Appropriately named, Sheer Ambrosia bakes food “fit for the gods,” says Magalde. Not any business can slap such a title onto their storefront and have it feel congruous. As someone who has traveled far past her current home, Draper, Utah, to better understand how food and dessert is derivative of varying cultures and identities, Magalde has earned the namesake. With baklava that is delivered across the United States, she has certainly mastered the craft and ardently recognizes cooking and baking as an art form, not just something that tastes good and satisfies a craving.

Raised in North Carolina, Magalde began her baklava training in high school while working for a Greek-owned seafood restaurant. As she became close with the family she worked for, they taught her the art of baking baklava—among other Greek dishes and pastries—which ultimately formed a deep appreciation for the dessert. Originally born in New York City, Magalde notes an intrigue in culture and history from an early age, having spent her time reading encyclopedias and developing a warmth for exploration. She says, “Early on, I knew I wanted to travel the world. Food was my entryway into a lot of different cultures … You learn so much about a culture through their food.”

“It’s due to Magalde’s avidity for history and combining her travels with her roots that Sheer Ambrosia is so attractive.”

As a former History major who has traveled to South America and Europe, Magalde is well aware of how one country’s culture may overlap with and influence another’s, which is evident in cuisine. She says, “It’s not all just black and white; cultures blend and mix, and it not only shows in the language and dress, but in the food as well. My baklava is Greek-inspired, but it’s not just Greek. It’s Middle Eastern; it’s North African; It’s Eastern European—there are a lot of countries that call baklava their own.”

And each country has its own variation. Middle Eastern baklava consists of rosewater and simple syrup, while in Greece they use honey. Since Iran and Turkey commonly use pistachios, their baklava is bright green. Magalde’s recipes and seasonal baklavas are all infusions of what she describes as the Greek way mixed with Southern traditions. “I use walnuts, almonds and pecans,” Magalde says of her own signature recipe. “It’s all inspired from the Greek community where I learned to make baklava. I’m from the South—my mother would make apple pies, peach cobbler and blackberry pies, so I combine my Southern roots with the Greek baklava, [like] how I make a blackberry-walnut baklava.”

It’s due to Magalde’s avidity for history and combining her travels with her roots that Sheer Ambrosia is so attractive. “I’m a Black woman making baklava from Greek people in the South …. History is alive and well,” she says. In addition to her signature recipes, other seasonal pastry concoctions Magalde has created are the cranberry, apple and pear baklavas, each containing walnuts. One of the top-selling baklavas, the cranberry walnut, combines the tartness of the bursting, fresh fruit with the sweetened honey glaze. “It’s so beautiful,” she says. “The bright red of the cranberries is photogenic. Who wouldn’t want that on their holiday table?” Since Magalde consistently uses fresh, natural fruit in her pastries, she offers 12 seasonal flavors to encompass the year, including a traditional baklava, chocolate almond, peach cobbler, walnut and sugar plum.

“This is an experience from the minute you smell it.”

“Baklava isn’t just a food—it’s art,” Magalde says. “I enjoy making food look beautiful. I enjoy presentation beyond taste. You want there to be a dilemma—people won’t want to eat it because it’s so pretty, but then they can’t handle it anymore, and when they take their first bite, they’re glad they did because it’s so scrumptious. This is an experience from the minute you smell it.” To attain this perfect product, a lot of time goes into preparing and baking baklava. “It’s a time consuming product,” says Magalde. “I put 45 layers of phyllo dough in every batch—you hand lay and hand butter 45 layers. I use real honey and butter—I use real quality ingredients, and that’s why I’ve had the success that I’ve had.” Magalde’s delicious, inventive recipes and dedication to the craftsmanship of baking baklava is how Sheer Ambrosia maintains returning customers.

“The whole business is a story.”

Sheer Ambrosia began from Magalde’s home, as it was more feasible than introducing a brick-and-mortar at the time. But after eventually moving Sheer Ambrosia into a storefront, Magalde came to the conclusion that her business is meant to serve strictly online. Now, in the evenings and weekends after her day job, Magalde transitions into baking baklava, packing deliveries and sending them coast to coast. She notes COVID-19 had a particularly strong impact on the business, with a severe initial decline in customer orders. As demand eventually began to increase, Magalde hand delivered (continuing to stay six feet away and wearing a mask) baklava orders around Salt Lake with the desire to personally acknowledge and thank those who chose to support her, understanding it was her job as a business owner to turn these one-time buyers into loyal clientele. “I’ve been shown so much love from so many people across the nation,” she says. “I love nurturing people with my food.”

“The whole business is a story, and I love telling the story of how this Black girl from the South learned how to make baklava and turned her hobby into a business,” Magalde says. Check out Sheer Ambrosia’s website to order her personalized, gourmet baklava: sheerambrosiabakery.com.