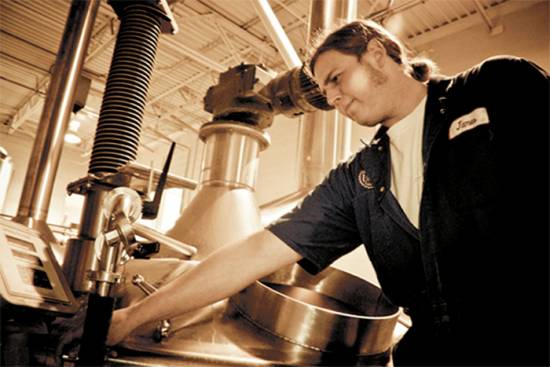 The Brews of Four+

One of the benefits of being a beer dork is the opportunity to get to know the rock stars of our local beer scene: the brewers. Ironically, once upon a time they were home brewers just like me—but without the foul mouth.

One of these brewers is James Smith of Four+ Brewing (an offshoot of Uinta) in Salt Lake City. I got a chance to meet James or “Jimmy,” as some call him, a few weeks ago. I guess I didn’t make a complete ass out of myself at our first meeting because James agreed to meet with me again to talk about brewing in Utah and some of the stuff they’re brewing up for this summer over at Four+.

SLUG: So, how did you become a brewer? You started home brewing, right?
Smith: Yeah, it was just a hobby for the longest time. Then I was out looking for a part time job and found one over at Art’s Brewing Supplies. I worked there for about a year, and that’s where I started thinking maybe I could score a job working at a brewery. Then one day Becky Britter from Uinta’s office came by Art’s and said, ‘Will you post this? We have an opening for a kegger.’ I said, ‘No, I’ll just come down and apply.’ I went over there and Mark Allen hired me. I kegged for about a month, then one of the brewers quit. Rob Kent, the head brewer at that time, suggested that instead of looking outside, to just bring me into the brew house. From there I got my foot in the door and about a year and a half later, Rob quit and I just kinda moved into the Head Brewer’s spot. That was in ‘05.

SLUG: Did you ever see this coming?

Smith: No, never. I never had any formal training, never went to college. It was just being in the right place at the right time. If it hadn’t been for Becky coming into Art’s, I would probably not be here.

Smith: My father and Art always pounded into my head a sense of working hard and I’ve always tried to live up to that. I’m not afraid of hard work.

SLUG: You mentioned your father. Did you grow up with a beer culture in your home?

Smith: No, my father is LDS. My first experience with beer was the movie Strange Brew. Maybe that planted a seed––who knows?

SLUG: I know this is a loaded question, but what’s your favorite style of beer?

Smith: Hmmm, that’s tough. Right now I’m big into Belgian beers, but Porter and Stout have always been some of my favorites. I guess it all depends on my mood.

SLUG: What was your first beer here at Uinta?

Smith: Punk’n was my first Four+ beer recipe. We had a little competition between me and Rob Kent to see who could make the best beer. The winner of that competition would get their beer made. Everyone liked mine. That was the first time I sat up and thought, wow, I can really do this.

SLUG: I’ve noticed that you guys have had quite a few new labels pop up in the last few months.

Smith: Well we had Rype come out about a year ago, that’s a great summery beer.

SLUG: Is that a Belgian style beer?

Smith: Actually no, people think that, but we use our normal yeast strain and just add orange peel and coriander to get that specific taste. We were just shooting for a good refreshing orange ale.

SLUG: I love Rype, I think you guys have a real winner there. What was your next summer beer?

Smith: The next beer we came up with was Hive.

SLUG: Now this is the honey ale?

Smith: Yeah, this one was a true group effort. Will Hamill, Eric Baumann, Kevin Ely, Josh Jones and myself spent a lot of time bouncing ideas off each other for this one. I think we went through probably three different recipes, and in the end the final beer was literally made up of everyone’s input. It’s made with lots of local honey.

SLUG: Is it a wheat beer?

Smith: No, just barley. I would describe it as a light easy drinkin’ beer. A little toasty with light hops and that great honey flavor makes it really easy on the palate. If you’re trying to get away from the big macro beers, this would be the one. It’s a great lawn mower beer. I love it.

SLUG: What makes this one different from everything else out there?

Smith: Summ’r is what I like to call a very light, extra pale ale. It’s all organic like Wyld. We’re using a very interesting type of hop from Japan known as Sorachi Ace.

Smith: To be honest I’d never even heard of them until Will bought them. The Sorachi Ace have a very lemon/peppery aroma with citrus notes––herbal as well.

SLUG: How do you come up with a beer recipe using a hop variety that you’ve never used?

Smith: Well, trial and error. The first batch was way over-hopped. I dry-hopped it and the whole bit. It had a massive lemon aroma, but was just way too bitter. From there I just scaled it down. Here, try it.

SLUG: Wow, that is lemony. Very different. Is anyone else using Sorachi Ace in Utah?
Smith: No, as far as I know we’re the only ones in the state using them. It’s pretty cool being able to make a pale ale with a completely different hop profile than people are used to. That’s one of the things I love about being a brewer.

SLUG: Yeah, I get that. People really seem to love their jobs around here.

Smith: It’s a real team effort around here in everything we do. Everyone has a genuine passion for brewing, and we all bring a different element to what we do