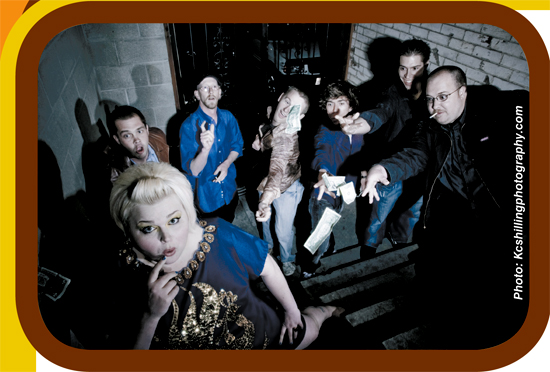 Localized: The Radio Rhythm Makers, Kate LeDeuce and the Soul Terminators, and The Boomsticks. –...

This month’s Localized features three bands that have taken vintage and retro style from years past and put their own spin on it, but remain true to the music they’ve been inspired by. On June 19, The Radio Rhythm Makers, Kate LeDeuce and the Soul Terminators and openers The Boomsticks will hit the stage at The Urban Lounge.

I can’t say there is another band in Salt Lake like Kate LeDeuce and the Soul Terminators. When their tunes hit your ears, you don’t even think it’s a local band––you just feel the groove. Taking cues from the soul and funk masters of the 60s and 70s, this band has created an enormous sound that can only be described as uniquely spectacular. I sat down with Philips, McCarley and LeDeuce to see what this band was all about.

SLUG: How did this band come together?

McCarley: Jeff [Philips] and I got together and just wanted to start a soul band. We used to work at a guitar store together. We started learning songs and writing songs, and Jeff brought in Brandon [Hansen] on drums who he’d known for long time.

LeDeuce: I came in to record my solo country stuff with Brad [McCarley], and they asked me if I wanted to give this a try. I believe me answer was, “Hell yeah!”

McCarley: Jeff and I thought there was no way she’d be interested, but it all came together, and we added a killer horn section, and we were just lucky to have everyone join because they are all such killer musicians.

SLUG: How serious are you about this band? Where do you want to take it?

McCarley: This is the most serious band I’ve been in. We’ve got this 7” coming out, and we’re planning a tour: 10 dates across the Northwest. It’s been really cool––everyone has been down. These are the best musicians I’ve ever played with.

LeDeuce: It’s like we’ve got all the musical crap out of our systems, and now we’re ready for something serious. I mean, we don’t take ourselves seriously, but when it comes to the music, we take it very seriously. We should practice more, actually.

SLUG: Soul is such a wide-open genre. What are the major influences on the band?

SLUG: How do you keep it contemporary?

Philips: We started with the foundation by listening to James Brown, Meters, all that stuff, and then putting our own adaptation into it. I think that makes it contemporary.

McCarley: We all come from other backgrounds, and that just naturally comes out.

SLUG: How has this band been received?

McCarley: I’ve been overwhelmed. Going from my old band Red Top Wolverine Show, and Kate’s solo stuff, where we were both playing to three people a night, this band has been growing a following from the beginning. People go nuts. It’s great to have a following consisting of more than just our friends.

LeDeuce: We’re all about the audience interaction. We get people to dance. We’ve got a great crowd of people from 20 to 40 years old. Everyone finds a connection to this music.

SLUG: What is your connection to the Salt Lake Recording Service?

McCarley: I own this recording studio with a partner, and I’m the engineer. It’s pretty great to have the whole studio at my disposal.

SLUG: Is it hard to keep seven people on the same page as far as practicing, recording and playing shows?

McCarley: Well, a lot of these guys are going to school, so scheduling can be hard. But everyone is dedicated and some of these guys are jazz majors, so they keep their chops and can pick up a new song so fast.

SLUG: What’s your favorite beer to bring to practice?

LeDeuce: Lion beer, PBR, Miller, but we’re more of a bourbon band. Beer finds its way to most of our practices though.

Salt Lake’s musical landscape needs more acts like The Soul Terminators. The band is a force of big sound that is unlike anything else going on around town.

The Radio Rhythm Makers have harvested rhythm and blues and fused it with a traditional rockabilly style to create a niche all their own. These guys and girl are playing an almost-lost form of music. They’ve educated themselves and their audience simultaneously about the history of blues and how it evolved into rock n’ roll. This highly talented six piece is quite serious about what it does. They’ve played out of state and plan to do more touring this year as long as their nine-to-fives don’t get in the way. I caught up with the band before their session at the Salt Lake Recording Service’s studio, where they’re about to begin recording their first 7”.

SLUG: You guys fuse a couple forms of vintage music. How would you describe your sound?

Martak: What we really are is a jump blues band. We’re inspired by the 40s and 50s rhythm and blues stuff like Ray Charles, Ruth Brown and Wynonie Harris. We also play some country tunes, and rockabilly is a part of what we do, but we really try to drive the rhythm and blues. A lot of bands that play vintage music play a punked-up or sped-up version, and that’s not what we want to do. We take in what’s been done before and put our own spin on it, and that makes it unique.

Long: It’s just good to know that in this day and age of computers and iTunes and Macs, there are actual musicians out there playing instruments. No robots or anything.

SLUG: What do you do to make your music stand apart from the original music you are influenced by?

Martak: We’ve got people from all different backgrounds. Some have played jazz and the blues and some have played rock, so everyone brings their own interpretation to the group.

SLUG: Do you find that you’re educating your audience on the style and era of music you’re influenced by?

Martak: Yes. A lot of people know all about the mainstream artists of that time period like Ray Charles, Johnny Cash and Jerry Lee Lewis, but we try to find stuff that’s a little more obscure, so the audience isn’t quite sure if we’re playing an original or not.

Long: What’s great is that [Jimmy] knows so much about this music. I mean I’ve always loved older music, but I just didn’t know a whole lot about it until I met him and joined the band.

Martak: We really try to push Ashlie’s vocals as our lead instrument of the band. To me, she has the same type of soulful voice that Ruth Brown and Etta James had, but bringing a contemporary energy and feel to it. We’ve got so many talented guys like Spence and Jonny who really know their shit. Spence is classically trained and is a huge jazz guy. He can play anything.

Kellogg: I’m classically trained first and then trained in jazz, so I’ve done Bach and Vivaldi, Louis Armstrong, funk, light jazz and Irish folk, which is really fun. I play in eight or so bands around town. In fact, I also play with Kate LeDeuce and the Soul Terminators.

SLUG: Any line-up changes over the years?

Martak: We’ve been through a couple drummers, and we really wanted to find somebody that could play this music, and I knew Dave [McCall] through a punk band we used to be in. I’ve always wanted to have him in the band and I knew he could do it. He has jazz projects and was in The Corleones, but he was our first choice to be in the band.

SLUG: What are your plans for the future? Any touring or recording going on?

Martak: We’re about to record a record here at the Salt Lake Recording Service. We’ve had offers to tour in southern California and other places, and that’s something I’d really like to do, but we know there is a finite amount of people that are able to live off of playing this kind of music. I think we have a chance to do that––we just need to stay committed to it.

SLUG: How good would you say you’ve got to be to play in this band?

Martak: We are a pretty tight group. Our solos are never played the same way twice.

Long: We’ve gotten pretty good at reading each other. If our drummer, Dave, wants to take us somewhere, we can follow, and without missing a step, we’ll all be in place.

Kellogg: You know, at this point we don’t have time to bring along any beginning players. It’s nice to play with musicians who show up every time to do their part.

SLUG: This being our beer issue, what’s everyone’s favorite beer?

Martak: I will absolutely endorse Wyld.

Martak: I also brew my own so, Jimmy beer is good.

With big plans in the future, this band is going to be making noise for a while. Whether it’s throwback, retro, vintage or whatever else, The Radio Rhythm Makers bring it to life and make it dance.