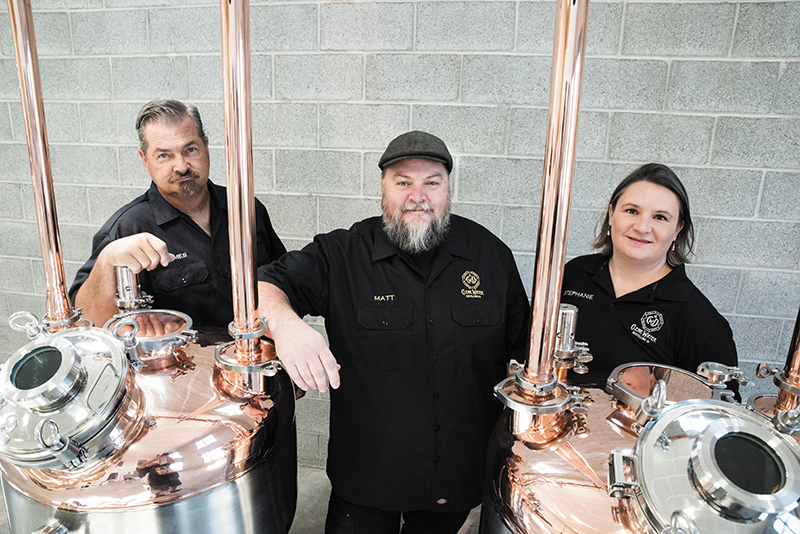 Perusing the aisles at your local state liquor store doesn’t really hold any surprises. Vodka, whiskey, rum, gin, brandy and tequila—the common liquors are like old friends we know well. A few sickly sweet liqueurs or exotic bitters aside, there are few, if any, other recognizable categories of liquor available in the market. Is that all the world of distilled spirits has to offer? Matt Eau Claire doesn’t think so, and he intends to prove it by opening Clear Water Distilling Company, a distillery that will focus on more unique offerings.

Originally having a career in programming, data and enterprise architecture, Eau Claire found himself captivated by more creative pursuits. His first experience with high-end spirits was a taste of single-malt scotch at a friend’s house, and it struck a rich, smokey chord. “It blew me away how smooth it was,” he says of the whiskey. “I didn’t know liquor could be like this! I never thought about drinking it straight.”

From there, he went on to be a lover and collector of fine spirits and would often visit distilleries when he and his wife would travel. Liquor ads often tout the long history of such-and-such brand, but practically, that means that the product has been crafted in the same exact way for many years, decades or even centuries. Eau Claire acknowledges that there’s nothing wrong with this approach, but he feels that modern drinkers are ready for new and different experiences. “Tradition is all fine and good,” he says, “but all the methods are the same.”

“I want every spirit that we make to be perfectly comfortable being drunk neat.”

Coming from a background outside of alcohol and hospitality means that Eau Claire has a fresh set of eyes with which to see the industry and a willingness to try unconventional things. When he was gifted with a small home still a few years ago, the first thing he put through it was something unique. “I’ve grown kind of disappointed with the traditionalists,” he says. “I have an opportunity to do something different.”

He fermented a wash of apples, pears and other fruit, then distilled it mixed with red and white wines, yielding a surprising result. The sangria-like base had been distilled into a smooth, flavorful liquid that received positive reviews from his friends, but didn’t fit neatly into any category. Initially he called it an eau de vie: a usually un-oaked brandy made entirely from fruit. As he refined the recipe, adding molasses to the fermentation and a short oak-conditioning period after distillation, the reviews kept getting better, but the classification of the product became harder. Still, Eau Claire was encouraged enough that the idea for Clear Water Distilling was born.

Eau Claire tried his hand at brewing beer before distillation, and he equates distilling to the brewing world before craft beer broke out and explored new techniques, new ingredients and new styles. “It’s the appetite for something new,” he says of this drive for innovation. But it’s important to him that taste isn’t left behind, drinkability being his primary goal when designing new products. “I think the worst thing is when you have to mix or blend a spirit with something else to make it tasty,” he says. “I want every spirit that we make to be perfectly comfortable being drunk neat.” In a world where many spirits are produced exclusively with cocktails in mind, this approach stands out in the marketplace.

“I’m just going to do whatever I want to do, and whatever shelf on the liquor store we have to be on, so be it.”

Besides the eau de vie, which he now calls Josephine, Eau Claire plans to release Lorenz, a rum made from high-grade molasses and piloncillo sugar, fermented with two different yeasts and distillation-infused with vanilla and cinnamon. This recipe will place him squarely outside of the usual rum classification, which will make it unlikely that liquor stores will stock his product with the other rums. “The hell with it,” he says in reference to his genre-breaking spirits. “I’m just going to do whatever I want to do, and whatever shelf on the liquor store we have to be on, so be it.”

Eau Claire also knows that if he wants to challenge usual liquor categories, he’ll need to start with the experts. “Our concentration is going to be with the community, with the of bartenders and the restaurants,” he says Clear Water’s marketing strategy. By getting mixologists excited about his products’ uniqueness and flavor, he hopes he can intrigue customers more used to the standards. The proper names of these products aren’t accidents, either, and are chosen to honor historical figures who fit the distillery’s stated philosophy of “Defiantly different.” The sangria-based spirit is named for Josephine Baker, the famous African-American dancer and civil rights activist who became a cultural sensation in her adopted France and worked in the Resistance during the WWII. Similarly, Lorenz is named for Lorenz Peter Freuchen, a Danish adventurer who risked his life exploring the Arctic.

“I’ve grown kind of disappointed with the traditionalists. I have an opportunity to do something different.”

Furthering the theme of defying expectations, Clear Water Distilling will be Utah County’s first distillery since before Prohibition, possibly the first ever to hold a federal license. “They’ve been unanimously accepting everything that we’ve wanted to do,” he says, speaking of Pleasant Grove’s city council. Besides the distillery, which is still being planned and built, a bottle shop and tasting room are also in the works, with eventual plans to include a restaurant or bar concept further down the line. We Utahns can help out with a form of crowdfunding where you can actually purchase ownership in the distillery.

You can check out clearwaterdistilling.com to find out what brave new liquors Clear Water will come up with next.

A Priest, a Minister and a Rabbi Walk into a Bar: Congregation Spirits
Pancake and Potato Pioneers: The Hammer Spring Distillers