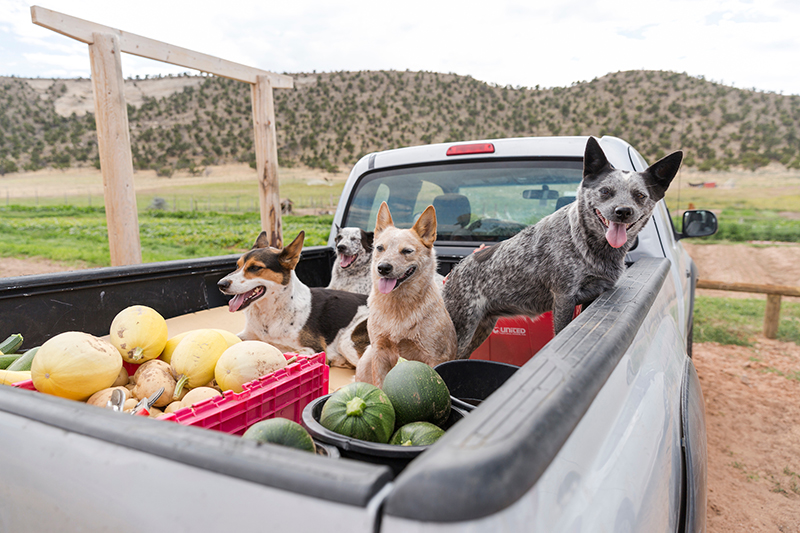 Where the Hearth is: Hell’s Backbone Grill & Farm

Boulder, Utah, is a small town. With a population of just over 200 people who mostly engage in ranching and farming, it sits on the northeastern corner of the Grand Staircase–Escalante National Monument. It was in this unlikely eden of sagebrush and piñon pine that I was to find one of Utah’s only James Beard Award–nominated restaurants, the Hell’s Backbone Grill, nestled along the highway in the comfortably idyllic embrace of the Boulder Mountain Lodge. Started in 2000 by chefs Jen Castle and Blake Spalding, HBG was an experiment in letting ethics rather than profits decide how a restaurant should be run. The remoteness of the location alone precludes the reservation-only weekend dinner services and the hour-wait, mimosa-fueled brunches common to urban establishments. But the trip down state Highway 12 to this unique desert oasis is more than worth your time for the food alone, and the gorgeously rugged scenery is just a bonus.

Now in its 20th year, HBG embraces the rural setting and its surrounding wilderness, and tries to get us all to slow down a little. Having met while cooking on river trips in the Grand Canyon, both Castle and Spalding were up for a challenge, but the full extent of the project they started would continue to develop in ambition and scope for the next two decades. Fully grasping what makes HBG so special takes driving a few more miles down Burr Trail Road to Hell’s Backbone Farm, which was started in its current location in 2005 to supplement the restaurant’s increasing need for fresh produce grown to meet their exacting standards of taste and environmental sustainability.

“Everything in the restaurant has a purpose.”

Farm Manager Tony Jacobsen took a break from his work to show me the farm and walk me through this special relationship. His small team exhibited attention to detail and willingness to work hard as they painstakingly hand-weeded long rows of lacinato kale, and scarlet nantes carrots are the standard here. Everything on this farm is done with human power, and the days can be exhausting—no tractor, no weedkiller, no pesticides and no chemical fertilizers. The strict no-kill policy inspired by Spalding’s Buddhist principles extends even to pest insects like the aphids that sometimes infest the plum trees present on the property. But Jacobsen believes that these measures are important to keeping the farm balanced. Speaking of his bosses and chef partners, he says, “Blake and Jen, at no point, have tried to make [Boulder] a different place.” A Utah native, he’s lived all over the state and worked in a variety of industries, including coffee shops and bike shops in Salt Lake City. As his interest in sustainability and agriculture grew, he was connected with HBG and moved down here, line-cooking in the kitchen and volunteering on the farm his first season.

Jacobsen became the Head Farmer in 2014 and, since then, has been able to increase the yearly output from around 4,000 pounds to a mind-boggling 23,000 pounds of fresh produce for the restaurant. In his “spare time” at home, he raises the pigs that provide pork for the restaurant and is trying to start a program of making goat cheese. And he’s not content to stop there—just over three acres of the land is currently being cultivated, and he’d love to be able to extend that, expand their livestock populations of goats, llamas and chickens that all do their part, and to start a vermicomposting program to let worms create valuable manure out of the waste cardboard that the restaurant generates. They’ve already been able to take the restaurant’s food waste and incorporate it into the compost that, in turn, feeds the next year’s crops. “Everything in the restaurant has a purpose,” says Jacobsen.

The relationship between the HBG project and the surrounding town has had its growing pains, but overall, this landscape prevents you from being able to stay away from your neighbor. “It’s very interdependent,” says General Manager Nina Brownell. “It’s the way to get by. You have to have good relationships with people because you never know when you need something or they need something, and you see them every day, so you care.” Rather than setting themselves apart, the staff and chefs engage in the community as much as possible and have made many friends. They help with local projects, maintain orchards and use the fruit, and reach out when they may need something.

This sense of belonging extends to more than just the locals. “It’s so much more than just about the food,” says Brownell, alluding to how she and the rest of the staff think about the relationship between this place and the customers who arrive here. “Food is the thing that gets them in the door, brings them back and opens them up to the experience. If people are enjoying their food, they’re going to be curious about it. They’re going to want to know where it came from. If it’s bad food, it doesn’t make a difference that it came from your farm—it doesn’t taste good.”

Castle picks up the thread, saying, “These travelers might not know where they are. They might not mean to be here—they might be grumpy and tired and dehydrated and scared. [We] bring them in and soothe them, welcome them—then they can relax, and then they can get curious, and then we can start the education part.” And it’s this approach of creating comfort first that has led to the success of HBG.

“If it’s bad food, it doesn’t make a difference that it came from your farm—it doesn’t taste good.”

Next door, the Boulder Mountain Lodge was started in 1994 as an ecotourism destination and abuts the calming natural refuge of a bird sanctuary. The rooms are spacious and comfortable and just a few steps away from the restaurant—which serves breakfast, lunch and dinner, and is oftentimes the only place open for a weary roadtripper to get a meal, such as when the nearby Burr Trail Grill closes on Sundays. “Our rule is ‘Feed everyone.’ There’s nowhere else to go, there’s nowhere for hours, but we’re happy to make sure they’re going to be OK,” says Castle before she relates to me a story of a dozen foreign tourists showing up after hours one night and being desperate for anything. The staff jumped in and served meatloaf and salad to the ravenous strangers rather than turn them away. It wasn’t the full menu, but nobody went hungry—another mark of the dedication to the values that originally brought Castle and Spalding here in the first place.

For them, this dedication is best communicated through the food. Even the practice of eating meat, which is allowed in the Tibetan Buddhism to which Spalding adheres, is taken to its local and ethical extreme. “It starts with going out to meet the cows that are ultimately going to become the meatloaf,” says Castle. “We are standing in the field with the clean water and the perfect sky and meeting the cows that we’re going to take into our bodies, and that’s crazy and intimate and terrible and wonderful.”

“It’s so much more than just about the food.”

The restaurant, like the land around it, goes through seasons. The farm just had its “garlic party,” where hundreds of pounds of soft-neck garlic is harvested, cleaned, braided and hung from the rafters by the staff, ready for use throughout the coming year. Stone fruit trees start bearing apricots, cherries, peaches and plums in late summer, which make it onto the menu in the form of sauces, jams and desserts. Fresh tomatoes, corn and peppers become featured as the heat continues while extra cucumbers and cabbage go into crocks to ferment into pickles. The fall harvest is best seen visually, as thousands of pounds of the farm’s 41 varieties of winter squash begin to fill every spare surface in the dining room, “partially because it’s beautiful, partially because we need a place to store it,” says Brownell wistfully. Castle’s favorite yearly ritual is near the end of their nine-month season. “For Thanksgiving, the whole year is saved up,” she says, then referencing their yearly aphorizing: “‘Make sure you save those green beans or those almonds,’ just saving up all those little parts so we can have this beautiful Thanksgiving meal.” Gratitude for what you have plays a big role here.

Over the course of my brief visit, I was lucky enough to dine at the Hell’s Backbone Grill twice. Dinner was a showcase for farm produce as a summer storm rolled in around us. The meal started with a trio of treatments of this year’s ample garlic harvest, as well as fresh and delicious sauté of different beans. This was followed by two soups, a vegan posole and a cold pea soup accented with mint. Both the wonderful elk sirloin and the special of blue-corn tamales in red chile sauce came with an array of fresh seasonal vegetables. For my second visit, it was creamed kale, carrot purée, beet root and cabbage, but the nature of the menu means that it will most likely be different when you visit.

“We are standing in the field with the clean water and the perfect sky and meeting the cows that we’re going to take into our bodies, and that’s crazy and intimate and terrible and wonderful.”

Another seasonal element was the prevalence of apricots, which had arrived as a bumper crop that I enjoyed in everything from an award-winning salad, to an excellent cocktail with High West Double Rye, to the dessert of baked apricot crisp perfectly balanced with foraged pine nuts and vanilla ice cream. The thoughtfully curated wine list and beer offerings focused on local, where possible, and even the bitters and liquor list strives to promote Utah products.

Where dinner was elegant and precise, breakfast on my last day in Boulder was comforting and substantial. I can say without reservation that the “Hungry Haymaker” breakfast was the best version of biscuits and gravy I have ever eaten. Their famous black-powder biscuits are topped with luscious gravy, including large chunks of house-made pork sausage and paired with farm eggs and smashed potato cake seasoned with sage. I added a side of toasted oatmeal-molasses bread with apricot jam and whipped cinnamon butter. Don’t forget to order their special “she-devil” hot sauce if you like the heat! I’m not usually a big breakfast guy, but I managed to take down all of these ample portions without a problem, a feat I attribute to the excellence of the product.

With my stomach utterly sated but my mind stimulated and awake with the possibilities for a life lived with a dedication and adherence to the values that create good food, I said my goodbyes and left Boulder to return to my urban existence of traffic lights, bike lanes, trendy food trucks and warehouse breweries. But lately, I’ve found my mind wandering back down Highway 12, back through Torrey and over Boulder Mountain to the red rock desert and summer monsoons. I think of how happy and how friendly every person involved with Hell’s Backbone is, and I know that just like any traveler, there’ll be a hearth waiting for me when I find myself there again.

Birds of a Feather: Chef Viet Pham Talks Fine Dining and Fried Chicken
What the Salt Lake Area Restaurant Association is Doing for You