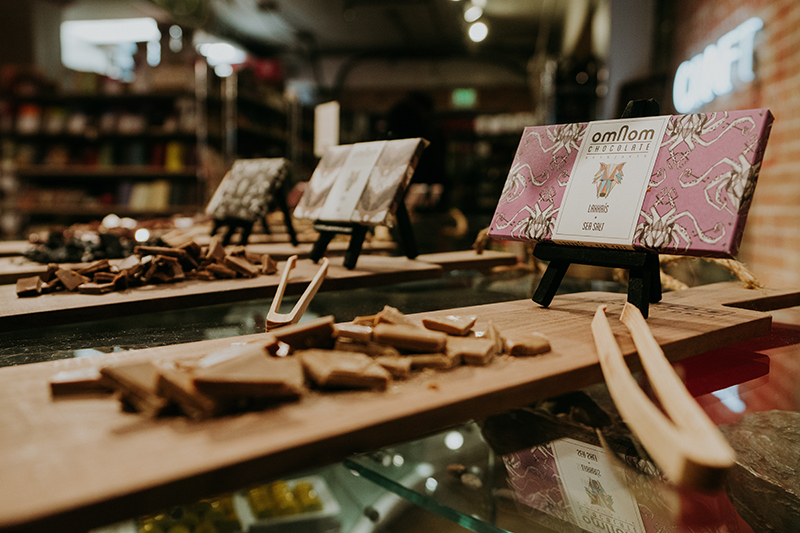 On November 13, I was lucky enough to attend a special dinner (the Icelandic Feast in the City of Salt) that was part of the eighth annual Caputo’s Chocolate Festival. Billed as a collaboration between the Salt Lake City specialty deli and Icelandic producer Omnom Chocolate, I wasn’t quite sure what to expect from a coursed dinner featuring a Scandinavian confectioner. Cacao makes a diversity of flavors, all of which can be interesting for pairing with other food or drink, but I don’t have much of a sweet tooth myself and was prepared to be overwhelmed with desserts. What I found instead was a celebration of Icelandic culinary tradition and products that surprised me with their depth and complexity.

Since their founding in 2013, Omnom has made a name for themselves with award-winning chocolate bars that feature ethically sourced beans from various growing regions, often paired by a delicate hand with Icelandic ingredients including milk, sea salt and barley. What the team at Caputo’s did for this special evening was give Omnom Co-Founder Kjartan Gíslason a chance to show off his background as a chef and prepare some truly fantastic examples of Icelandic home cooking. The result was educational, not only in its illumination of the lesser-known cuisine from a small country but also on the palate and culture that inform the choices Omnom makes for its chocolate.

What I found [at the Icelandic Feast in the City of Salt] was a celebration of Icelandic culinary tradition and products that surprised me with their depth and complexity.

Iceland is geographically isolated and geologically unique, with long, dark winters and volcanically active ground. As a result, the descendants of the first Norwegian settlers have always relied on techniques for preservation of products from their livestock industry and the surrounding fishing grounds to sustain them. Upon arrival at the event, we were greeted by a passed hors-d’oeuvre and cocktail pairing that exemplified these practices and tastes. Toasted bread was topped with a burnt-butter mousse, pickled dulse seaweed and shavings of dried cod, making for a crunchy bite that balanced dairy richness with salt and umami of the ocean. The cocktail was a simple and delicious mix of Iceland’s local caraway-flavored liquor, brennivín, with a blueberry liqueur with enough sweetness and acidity to balance the salt and fat of the canapé.

Once seated, Matt and Yelena Caputo welcomed us and introduced the Omnom team, speaking passionately on the subjects of heritage and quality, and why it’s a pleasure for them to support companies like Omnom. Then Gíslason introduced the first dish, a classic take on smurdbraud, or the Icelandic version of the open-faced sandwiches common in Denmark. The rye bread base is dense, dark and sweet, often baked with geothermal heat in pits dug for the purpose. This was then smeared with butter, a cured salmon called gravlax, dill, onions, capers and butter sauce and the result was rich and comforting. Caputo‘s Director of Education and Senior Manager Adrianna Pachelli paired the dish with a wonderfully pétillant Chenin blanc from Broc Cellars with notes of honey, lime and gooseberry, plus enough acidity to balance the sweetness of the dish but stand up to the onion and caper topping.

The [evemt] was educational, not only in its illumination of the lesser-known cuisine from a small country but also on the palate and culture that inform the choices Omnom makes for its chocolate.

The wine continued to shine with the next course, a “risotto” made of barley grown in Iceland, made creamy with the addition of two cheeses and mixed with foraged mushrooms, then topped with herbs and yet more seaweed. While not a fungus, “Sea truffle” is a type of ocean vegetable with a similar taste to the famously expensive ingredient and contributed to this dish being a dead ringer for a more classic Italian preparation. What set it apart was how the barley remained perfectly al dente, and how its earthy flavor was accented by the mushrooms and seaweed, without being taken over by the rich cheeses. Again, the acidity of the Chenin blanc played a role in cleansing our palates and leaned more into its mineral notes with this pairing.

Next up was the main event, a rendition of a traditional Icelandic Christmas dinner featuring lamb smoked over sheep dung along with all of the trappings. I know this sounds off-putting, and Gíslason was sensitive to this on our behalf, but the result was wonderful. Sliced thin and served cold, it was perfectly tender, and a pleasant, smoky aroma filled the room. The lamb’s natural gaminess was accented by this technique, and the wine pairing of a blended red from Idlewild Wines provided a seamless transition between the meat and its accompaniments. The earth and tobacco notes showed with the lamb but became more fruity and soft when offset by pickled beets, mushy peas and tiny potatoes cooked in a smooth milk sauce. The entire thing was anchored by a type of traditional Christmas flatbread called laufabrau∂ (leaf bread), which is fried crispy, salted and cut in intricate patterns with a special tool.

“Chocolate and cheese isn’t the most intuitive combination, but if you’ve ever had someone pair them as well as Matt Caputo did here, you’ll know how amazingly they can accent each other.”

While I was nearly stuffed by this point, I’m glad I left room, as the dessert was spot on and was followed by a small cheese-and-chocolate pairing, which capped the meal perfectly. First were tender pancakes filled with luscious skyr, a type of Icelandic fresh cheese that’s similar to yogurt, and drizzled with a blueberry syrup that referenced the cocktail from earlier. This was paired with a gelato made from Omnom‘s Tanzania 70% dark chocolate bar and was perfect for a non–sweet tooth like me. I was happy to see this was paired with a shot of Snow Angel from the local Waterpocket Distillery. This is distiller Alan Scott‘s take on another caraway-flavored liqueur called kümmel from around the Baltic sea, and was perfect served cold over a single, large ice cube.

What better way to finish this amazing meal than a pairing of the two cohosting parties most famous products. Chocolate and cheese isn’t the most intuitive combination, but if you’ve ever had someone pair them as well as Matt Caputo did here, you’ll know how amazingly they can accent each other. First was Caputo’s “Barely Legal” cheese from Utah’s own Mesa Farms, which brought out the strong raspberry and plum notes present in the Tanzania 70% chocolate. It’s pairings like this that show how diverse chocolate flavors can really be. Next was the even better duo of Caputo’s “Grotte Tartufo,” an asiago-style cheese aged in truffle butter, along with Omnom‘s award-winning Milk of Nicaragua. The combination was truly an exemplar for the rest of the meal with funky, creamy, buttery notes that blended so well that it was tough to find where the chocolate ended and the cheese began. This meal was a fantastic introduction to flavors, combinations and traditions that were less familiar to me but were no less comforting. At the Icelandic Feast in the City of Salt, I truly felt like I had been welcomed into and Icelandic home kitchen.

How Utah is creating its own “Little Italy” at Caputo’s
Chocolate & Cheese Festival @ NHMU 04.08