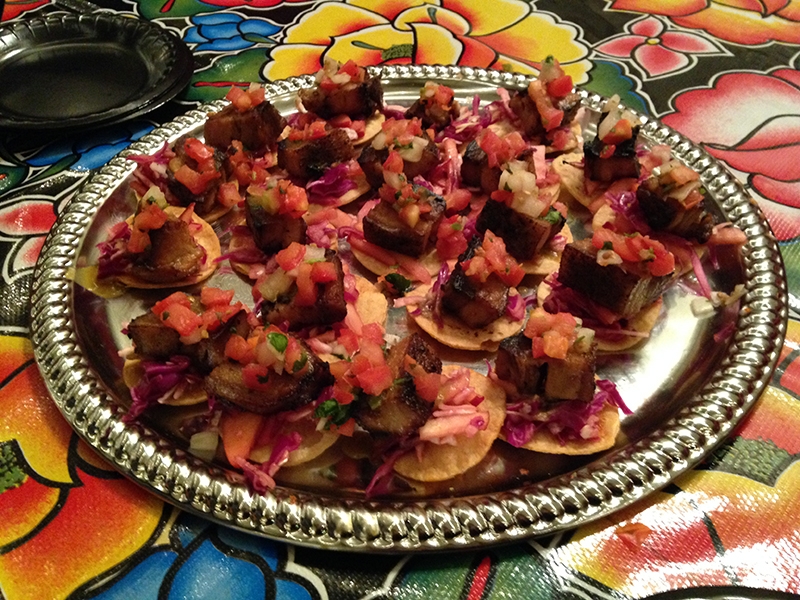 Not only is Celebrate the Bounty one of the best places to see the rock stars of Utah’s culinary scene work their magic, it’s also a heartfelt tribute to our state’s ability to produce and distribute amazing local ingredients. This evening, the Union Pacific Station was outfitted with representatives from some of the best restaurants in town—an apt setting, considering the gastronomical tour that was in store for the attendees. In addition to having over 20 restaurants participating, Local First Utah held a silent auction that allowed attendees to bid on food and vacation packages from all over the state.

Celebrate the Bounty is one of my favorite fall traditions for many reasons, but chief among them is the fact that each restaurant brings their own take on traditional autumn flavors. Pumpkin was used very liberally in both sweet and savory dishes—Dolcetti’s Pumpkin Gelato was a smooth and creamy excuse to start with dessert, and Black Sheep Café’s Squash Blossom Pasta turned the seasonal gourd up to 11 as a pasta filling. Red Iguana and Frida Bistro were rocking the marinated pork belly, both offerings capturing the sweet, bacon-on-steroids goodness of their starring protein. Overall, there was a trend of comforting, stick-to-your-bones food on display this year. It was a tough call to make, but I’ve narrowed it down to a few of my favorites.
Place: Black Sheep Café
Dish: Squash Blossom Pasta
At this point, a visit to the fine folks at Provo’s Black Sheep Café is like a visit to a good friend whom I don’t spend nearly enough time with. Their food and culinary perspective has always struck a nice balance between serious cuisine and homemade comfort food—needless to say, my expectations were high. The moment I saw their crew hand-rolling the homemade pasta that would soon envelop a silky mixture of pumpkin, squash and ricotta cheese, I knew that they weren’t messing around. I only need one hand to count the times that a dish has made me weak in the knees, but I’d like to officially welcome Black Sheep’s Squash Blossom Pasta to that illustrious group. It was an excellent representation of what they do best—soulful flavors with unpretentious delivery.
Place: Caputo’s
Dish: Cheese Three Ways
Anyone who takes cheese seriously in Utah has paid Caputo’s Market and Deli a visit—if not, they’re cheese poseurs and need to reexamine their life choices. When I saw that one of our state’s finest purveyors of cheese had a thematic menu based around my favorite form of dairy, it was difficult to contain my enthusiasm. They started off with the Copper Caputo Fondue, a pot of liquid gold made from cheese tinged with a brandy and Montmorency cherry reduction from the Copper Onion. It’s everything that you want a cheese to be—salty and buttery with a hint of sweetness. Second on the list was a slice of apple pie, a unique take on an American favorite by spiking the apples with a pungent cheese that gave the dessert an unexpected sharpness. Their third offering was a Fernet Pavlova with Mesa Farms Chèvre, which was another cheese-inspired take on a traditional dessert. They baked their Pavlova, a meringue that evokes a toasty marshmallow, with a bit of Fernet, which distilled a minty undertone to the crunchy and creamy dessert.
Place: Fresco
Dish: Utah Corn Budino
Budino is Italy’s answer to pudding, and Fresco prepared theirs with a tasty array of local corn. I’ve had corn pudding before—don’t knock it until you try it—but Fresco’s budino made me rethink the whole concept. First of all, the texture of budino is more akin to a thick, creamy custard, which paired nicely with the sweet corn flavor. The dessert was topped with crisp basil and fried corn silk, a nice marriage of Italian and rural American flavors.
Place: Frida Bistro
Dish: Puerco Borracho (Drunken Pig)
Pork always has a good night at Celebrate the Bounty. The folks at Frida Bistro were serving up generous slabs of pork belly that had been soaked in a tequila-based marinade and smoked to tender perfection. Though the pork belly was delicious on its own, it was perhaps the tamarind sauce that put this dish over the edge. It brought a sharp acidity to the dish that played nicely with the red cabbage slaw and the marinated pork.
Place: Pallet
Dish: Smoked Steelhead Trout
I came dangerously close to overlooking Pallet’s table tonight, but I’m very glad I didn’t make that mistake. They were serving smoked steelhead trout with a spicy chili jam, avocado, pickled radish and trout roe. The heat of the chili jam and the smokiness of the trout gave the dish a rustic, outdoorsy feel—a lot like sitting around a campfire after a long day spent pulling trout out of the river.
Not only was this a completely satisfying evening from a food-lover’s perspective, but it serves to accomplish Local First Utah’s goal of raising awareness about our local food culture—which is really badass if you stop and think about it. It’s no secret that we’ve got some serious culinary talent along the Wasatch Front, but you might not know that Utah is home to a very enthusiastic farming community that is supplying these great chefs with top-notch local ingredients. If that’s not a great excuse to come out and enjoy some local eats, I don’t know what is.
Photos: