Over the past few years, one of my favorite Downtown restaurants has been Eva. The small-plates restaurant serves a diverse selection of foods in portions manageable enough so that you can order half a dozen things and still not break the bank. Imagine my excitement when I, as SLUG Magazine’s Resident French Master TM, became aware that Eva Chef/Owner Charlie Perry had plans to open a French-style bakery just a few blocks away, Eva’s Bakery.

Eva’s Bakery: French Authenticity in the Heart of Salt Lake 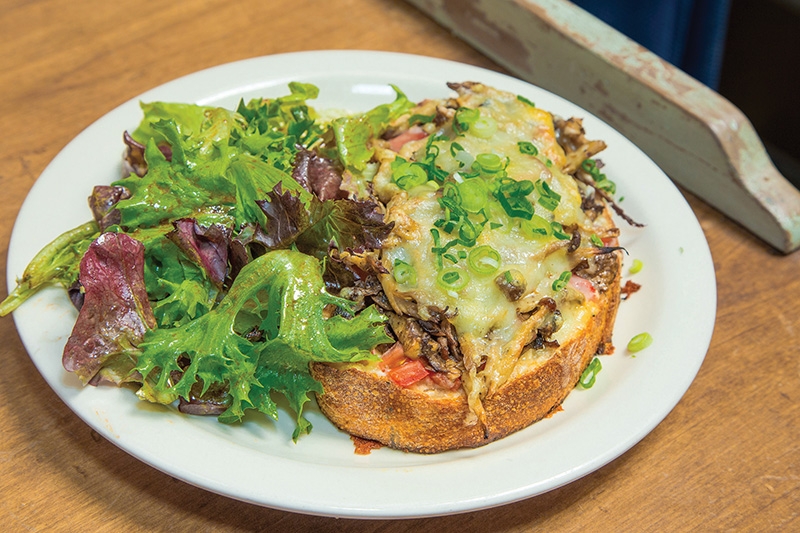 The Wild Mushroom Croque at Eva’s Bakery is an authentic take on the French favorite. Photo: Logan Sorenson
155 S. Main Street • evasbakeryslc.com
801.355.3942 • Mon–Sat, 7 a.m.–6 p.m.
Over the past few years, one of my favorite Downtown restaurants has been Eva. The small-plates restaurant serves a diverse selection of foods in portions manageable enough so that you can order half a dozen things and still not break the bank. Imagine my excitement when I, as SLUG Magazine’s Resident French Master TM, became aware that Eva Chef/Owner Charlie Perry had plans to open a French-style bakery just a few blocks away. The simply titled Eva’s Bakery has been providing for SLC’s cafe and baked goods needs for several months now, and as the food and service have found their footing, it has come time for us to give the place a proper visit.
The vibe surrounding the bakery begins before you even get in the door. The conventional French wood façade is painted a traditional light blue, with old-style lettering that spells out boulangerie—the Gallic word for “bakery.” This attention to detail continues inside, with customary glass cases for pastries, a counter-to-ceiling display of fresh bread, white Paris Métro wall tiles and intimate tables and lighting. From the outside, it looks like an ordinary bakery. Once you come through the doors, its double life as a restaurant comes into focus.
If you’re looking for quality coffee, espresso and tea, you need not look any further. They serve products sourced through Caffe Ibis and the Tea Grotto—companies with local ties, which are known for their fresh and sustainable approach to beverage making. The drinks range in price from $1.50 for a small drip coffee to $4.50 for something as elaborate as a large caffè latte. However you take your caffeine, they’ve got you covered.
The food is equally awesome. For the busy worker on a short break, they offer several pre-made, savory options that just take a moment to warm up. There are pizza slices for $3 each in flavors like chicken pesto, ham and mushrooms, and pear with walnuts and blue cheese. The pear variety is especially satisfying, with the sweet fruit and sharp cheese competing for dominance in every bite. They also offer a selection of croque sandwiches for those on the go. The term “croque” is derived from the French word for “crunchy,” and these traditional sandwiches are the mainstay of many a busy Parisian eatery. These differ from the standard preparation in that they’re served open-face, but the flavor is spot on. The best and most authentic version of the sandwich is their take on the Croque Monsieur (Mr. Crunchy), made with a thick slice of house-baked bread topped with béchamel sauce, gruyere cheese and ham. It is broiled until the cheese is bubbly and served warm—a bargain at only $6.
If you have time, though, take a seat and order from the menu. A popular lunch staple is the Wild Mushroom Croque ($9), a spin on their open-face sandwich that swaps out the traditional ham for a mound of gently cooked mushrooms. It is more knife-and-fork-worthy than a regular sandwich, and it’s served with organic greens and a balsamic vinaigrette. While they offer several noteworthy breakfast selections, salads and sandwiches, I think the restaurant really excels with their treatment of standard French fare. The case in point would be the French Onion Soup ($3/$5). According to legend, a French cook invented onion soup the morning after a raucous party, when all he had left were boiled scraps of meat, onions and flat champagne. Though the broth-onion-wine mixture can be hard to really mess up, it’s even trickier to get right. Eva’s Bakery pulls out all the stops. The broth is rich and savory, the onions are tender and caramelized, and the added topping of croutons and melted cheese really knock this one out of the park.
Having touched on the role the bakery plays as a coffee shop and lunch destination, let’s also touch on its role as a bakery. French bread is a high art, and not many are successful at it. Old French law limits the ingredients to just water, salt, flour and yeast, and even regulates the final weight of the loaf. While I’m not exactly sure how closely the bakery follows these old rules, the bread they create in house is nothing short of exemplary. Much French bread you find locally is too airy, too tough, and lacks much definition between the interior and exterior. The House Baguette at Eva’s is crusty on the outside and tender on the inside, with an ever-so-slight sourdough kick. It’s perfectly crafted and a good buy for $2.50 (or try a half loaf for only a buck). The sweets are also top-notch. Something as simple as a Chocolate Chip Cookie ($1.50) benefits from rich chocolate and browned butter. Éclairs and Paris-Brests couple perfectly formed choux-pastry with varieties of velvety pastry cream. The croissants are buttery and flaky, and stand up well to being filled with almond cream and baked a second time. The pastries range in price from $2 to $4, and some of the popular ones sell out early in the day.
Some of us wander Downtown looking for a good coffee shop. Others are in need of a quick but satisfying lunch destination. Lately, I’ve been looking for the spot to satisfy my sweet tooth. The cool thing is, with Eva’s Bakery, you’ve got all three.
Photos: