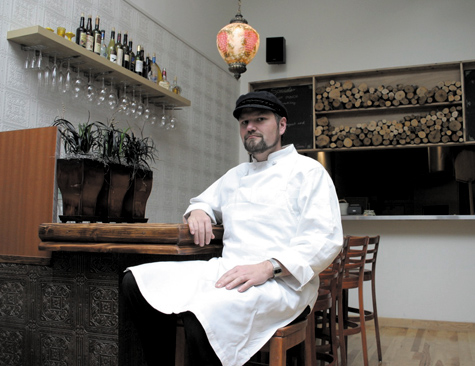 Charlie pictured at the bar in his new restaurant, Eva.
Photo: Ruby Johnson

March and April were rough months for me, both at work and at home. It’s during periods like this that I tend to seek comfort in food. There is something about stepping into a familiar setting with friends and family and enjoying a meal that makes everything seam a little more manageable. Although this restaurant is brand new, from the first moment I set foot into Eva it felt familiar and comfortable—like the kind of place I have always been hanging around.

My first taste of Eva was on Gallery Stoll night in March and the place had only been open a few days. The upholstered benches lining the south wall were yet to be installed and the bar was only half-finished. I could tell it would be a great looking restaurant once they were done. The walls were adorned with some large Trent Call paintings, each table had a lampshade style pendant light above it, and there was an antique glass pendant lamp above the bar that I later found out once belonged to the owner’s grandmother, Eva. There were a handful of people at a table, most of which were friends and acquaintances of mine, but it was otherwise empty, save for the staff. We were seated and started to peruse the menu, which consisted mostly of small plates with a handful of pasta dishes and a selection of baker’s pies and wood-fired pizzas that showed that chef/owner Charlie Perry was making good use of the pizza oven left behind by Lazy Dog Pizzeria, who formerly occupied the same space.

We started with a few beers, Parmesan, Garlic and Rosemary Fries ($5) and a plate of Brussel Sprouts ($5) that were sautéed and tossed with hazelnuts and cider vinegar. After a few bites of each, we realized that this would not be a quick stop, that food this good would require our full attention and at least a few hours. The fries were crisp and rich, the brussel sprouts were seasoned with a perfect balance of vinegar and salt. As we continued to order, we lost track of who ordered what and shared almost every dish with the group. There was Calamari ($6) ordered, some the most tender I have tried, and a Spanacopita ($5), so rich that the bitterness of the spinach was almost lost in the dish. We had a Wood-fired Flatbread ($4) accompanied by a white been and truffle oil puree. I tried the Salad Landaise ($6) a green salad with bacon, fingerling potatoes, dates and a poached egg. The egg broke into a perfect dressing and the savory smoke of the bacon was nicely offset by the dates. But the stars of the evening were the Saffron Braised Lamb Shoulder ($9) on a bed of couscous with golden raisins and artichoke and the Choux Farci ($7) a dish comprised of cabbage, ham, gruyere and root vegetables. The lamb was so tender it could be cut with a fork and the seasoning was understated and let the flavor of the meat show through and the choux farci was rich and creamy, the ham was bold, but didn’t overwhelm the sweetness of yam or the crisp of potato. There were other items ordered, but as the evening moved on I got lost in conversation and drink and, while sometimes overwhelmed by the tastes and smells around me, the evening became an event, rather than a series of individual dishes. Toward the end of the night we inquired about dessert, only to be informed that the chef had not completed a dessert menu yet, but that he could probably whip something up for us. We were brought a plate of fresh made donut holes tossed in cinnamon and sugar and served with a scoop of ice cream on the side. It was a simple dish, but like everything else that evening it was understated and executed to perfection.

I have since returned twice. Once for lunch, happy to find a paired down version of the dinner menu with a few items of it’s own to boast, and was lucky enough to share a Pig Three-Way Pie ($7.95), ordered mostly for the sex jokes, but enjoyed by all, a Slow-roasted Steak Sandwich ($8) with arugula and parmesan that was more like an open-faced flatbread meal than a sandwich and a Baked Ham Sandwich ($7) with gruyere and béchamel that was, in my opinion, the best of the three.

The next visit mirrored the first, a large group on a Friday night that consumed the entire evening and were pleased to find that upholstered benches had been installed as well as the bar seating, the place looked complete and my only criticism of the décor was that it was too brightly lit. This time we spent more time exploring the alcohol selections. Eva’s wine, liquor and cocktail menus, like the dining selections, are simple, but obviously chosen with care. There are a good number of wines by the glass ($4.50 – $8) and over 40 wines by the bottle to choose from. There is also a small selection of house cocktails ($6) as well as a small selection of liqueurs ($5 – $7.50). I am looking forward to my next visit, now that the dessert menu is available. I am also excited for the changes that will come this spring and summer as the farmers markets get underway and more local ingredients become available.