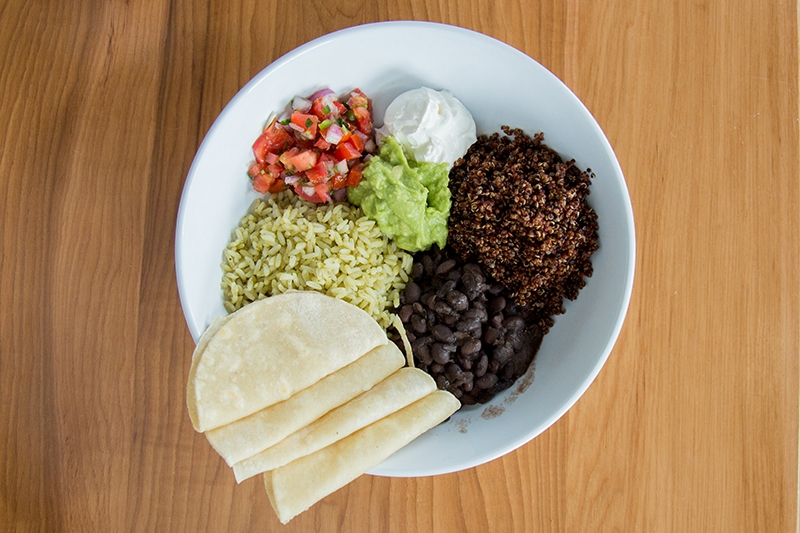 There’s one thing that you need to remember before making the trek up the Cottonwood Canyons for a day of skiing or snowboarding: Once you hit the slopes, no one will bring you tacos. If this thought threatens to cheapen your skiing experience, just remember that Luna Blanca Taqueria is open for business this winter. Seated right at the mouth of Big Cottonwood Canyon, skiers can stop in for some tasty riffs on traditional Mexican street tacos on their way up the canyon—or on their way back, if the taco craving happens to strike when you’re halfway into a run down the mountain.

If Luna Blanca’s charming, Tex-Mex ambiance and accommodating service don’t lure you in to see what’s cooking, perhaps their everchanging lineup of street tacos will. Not that their trusty taco stalwarts can’t hold their own—with locally sourced meat and veggies, each one is a tasty little composition of fresh flavors. That being said, it’s hard to resist the urge to check their website on a daily basis to see what their Taco Del Dia is going to be. I decided to take the plunge with the daily special, an order of Tamarind Beef Tacos, which comes with rice and beans ($9.99). As their menu allows diners to mix and match tacos within a single order, I decided to switch one with the Fish Taco, which is prepared differently, depending on what fish is currently on the market. Of the two, the Tamarind Beef was my favorite—the slowly braised beef spiked with the distinctive sweet and sour of tamarind painted a vibrant culinary picture. The fish of the day during this visit was Hawaiian Ono, which came served as a taco-sized filet with a cabbage slaw. Ono’s not a very fatty fish, so it dries out quickly if it’s overcooked—which is what happened here. The slaw was a tasty complement, but the Ono filet lacked the flavor that I was expecting.

Though Luna Blanca is a taqueria, and one can always find something satisfying within their roster of tacos, I would suggest wandering into the other areas of their menu. They’ve got an impressive variety of tequila, and they’ve always got a few daily cocktails to complement a meal. If you’re looking for an appetizer, the Roasted Mushroom Quesadilla ($8) is a great place to start. It’s a gooey, earthy dream for cheese-lovers and vegetarians.

In addition to their blend of Mexican cheeses, the crispy tortilla is stuffed with roasted mushrooms and quinoa, which give this quesadilla enough heartiness and flavor to kick-start any meal. The dish also comes with a healthy dollop of Luna Blanca’s house-made guacamole, which is really the litmus test for all great Mexican restaurants. Their guacamole captured that lovely, clean avocado flavor that I’m always looking for, and it paired very nicely with the elements of the quesadilla. I like my guacamole a bit chunkier, but the flavors were right on point. In addition to the quesadilla, Luna Blanca offers several options for the vegetarian taco fan. Their Taco Bowls ($8) start off with all of the veggies, rice and beans that are found in their tacos, and can be topped with a generous helping of quinoa for two bucks more. The hearty quinoa mixed with their fresh vegetables makes a filling option for those seeking a meatless meal. Luna Blanca’s Chopped Salad ($9) is another great vegetarian dish, as it throws grilled corn, tomatoes and cucumbers into the mix. The Taco Bowl and the Chopped Salad emphasized the freshness of their ingredients, but both of them could use just a little bit more seasoning—maybe a shot of citrus to bring the flavors together.

For those looking for something to dig a knife and fork into, Luna Blanca’s burritos are excellent—and huge. They offer a wide variety of fillings, including shrimp, braised pork and vegetables. Regardless of the order, however, it is imperative that you get that sucker smothered for an extra buck-50. A smothered burrito comes with Mexican cheeses and the option of red or green chile sauce, which can be a difficult choice. The red is spicier, bringing the smoky flavor of chipotle to the forefront— the green is all about the fresh, roasted flavor of its blend of peppers. Luckily, Luna Blanca offers the option for diners to get half and half—which I highly recommend. My burrito of choice was the Braised Local Pork Burrito ($9). Along with a choice of black or pinto beans, rice, lettuce, tomato and sour cream, the chefs don’t skimp out on the meat. The beautiful treatment of the pork made the natural sweetness of the meat stand out and, when it merged with all of the other flavors that were partying on the plate, it was immensely satisfying.

If there’s room for something sweet after the meal, the Churro Bites ($6) are a worthy choice. They come packaged in a brown paper bag, which the waiter shakes up and pours out into a large bowl. The most unexpectedly delicious aspects of this dessert were the lemon cream dipping sauce. Not only are they crispy and sugary on the outside, but the dough on the inside is warm and pillowy—the whole thing melts in your mouth.

During this year’s ski season, don’t overlook the need for braised pork and fresh salsa as an important part of Utah’s favorite pastime. Many a brave skier or snowboarder has had a potentially perfect run down the mountain interrupted with the sudden realization that it’s been far too long since they’ve had a taco.