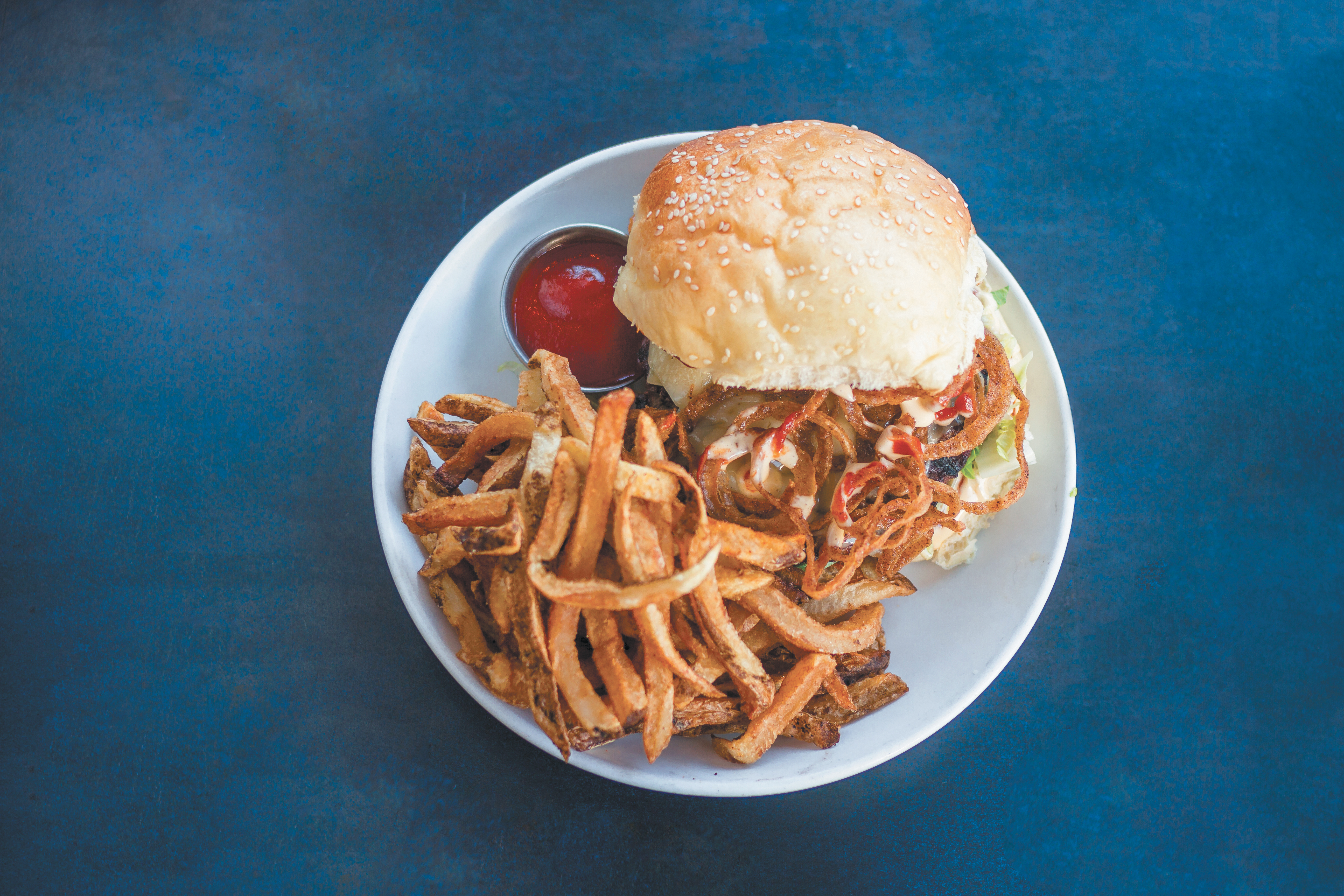 I’ve always considered the Gallivan Center to be a jewel of Salt Lake City open space—a tucked-away, quiet oasis in an otherwise business-as-usual urban block. The structural improvements in the past decade have done much to transform the plaza into the multipurpose space that it is today. The increasingly busy space has led to more foot traffic, which has in turn led to a cluster of restaurants and eateries popping up along the small avenue that winds its way along the south end of the Gallivan Center. Of these food destinations, From Scratch is numbered among the best.

From Scratch’s kitchen philosophy is anchored in the idea of hand-making what they can and outsourcing what they can’t make in-house to quality, local vendors. The flour used in their bread, pastries and pizza crust is ground from organic hard-spring wheat berries using their own wooden, Austrian flour mill. They also make their own mozzarella cheese, jam and butter. This respect for the process is reflected in the quality of their food.

Our first visit started with an order of Wood Fired Bread ($5), a sliced loaf of freshly baked whole wheat bread served on a narrow cutting board with jam and butter. As tender and delicious as the crusty bread was, the stars of the dish were the salty, homemade cultured butter and the seasonal apple jam. I found myself wanting to fill up on bread just to have an excuse to eat more butter. Alhough, honestly, this is a common problem for me. Moving down the starter menu, I also ordered the Honey Apple Salad ($7.25), a mix of arugula and spinach greens tossed with a ricotta honey vinaigrette dressing and topped with thin apple slices and candied almonds. The salad was larger than I expected, sweet and refreshing. My only regret was wishing I’d ordered a half-size so I could have left more room for the main course. I know better for the next time.

With appetizers behind us, it was time to settle on an entrée. As From Scratch is celebrated for their wood-fired pizzas as well as for their burgers, I thought I should give both a try. As far as burgers go, they’re famous for their Scratch Burger ($13/15), a grilled beef patty served on a brioche bun with shoestring onions, smoked cheddar and iceberg lettuce. This signature burger won them a Best of State award in 2014. As great as that sounded, I’m a sucker for bacon, so I went a little further down the menu and ordered the Bleu Cheese Bacon Burger ($14/16). This one was also served on a brioche bun and came topped with crispy strips of bacon and a layer of bleu cheese that was somehow both creamy and crumbly. There’s something about the melding together of flavors when tender beef meets salty pork and tangy cheese that makes me forget all of my troubles. The burger was perfectly cooked, not overly messy to eat and paired with a generous portion of Scratch fries and house-made ketchup. Definitely a good choice.

A return visit allowed me to sample from their selection of award-winning pizza options (Best of State, 2015). What I found was some of the best wood-fired pizza I’ve ever had the pleasure of eating. According to the server, their brick oven isn’t kept as hot as tradition would dictate, which allows for better melted cheese and crust that isn’t overly crunchy. The Margherita pizza ($11.25/13.25) pairs their hand-pulled mozzarella cheese with a crushed tomato sauce and fresh basil. The crust was perfect—not overly thin, plenty chewy and easily foldable once you decide to dispense with the silverware. If you’re dining with a picky 8-year-old as I was, they’ll even cut back on the basil and add extra cheese for no additional charge. As great as it was, I liked the Fennel Sausage pizza ($13.25/15.25) even more. This one was made with a crème fraiche sauce, sliced red and green onions, mozzarella and house-made fennel sausage. The flavor and crunch of the thinly-sliced onions weren’t overpowering and allowed the mild sausage to stand out. It was an exceptional pizza.

In addition to stellar burger and pizza options, From Scratch also offers up several fresh salads, a risotto cake starter, grilled chicken or braised brisket sandwiches for the lunch crowd and seasonal soups—so many good possibilities for a menu that looks limited at first glance. All of this can be washed down with fresh-brewed coffee, wine, a selection of local beer, soft drinks or sparkling water.

Then there are the desserts. The best, by far, is the bread pudding ($7). It can be a little heavy on the nutmeg, but this is forgivable when the oven-warmed pudding hits your palate. If bread pudding isn’t your thing, they also sell fresh donuts, brownie sandwiches and muffins. If you get a hankering for the desserts after hours, you’ll be pleased to know that the coffee shop next door, Three Pines Coffee, sells their baked goods during the hours when the restaurant is closed.

In all, From Scratch has been a great addition to our local food scene. As I find myself Downtown more often this summer, I’ll make it a point to stop in as often as I can.