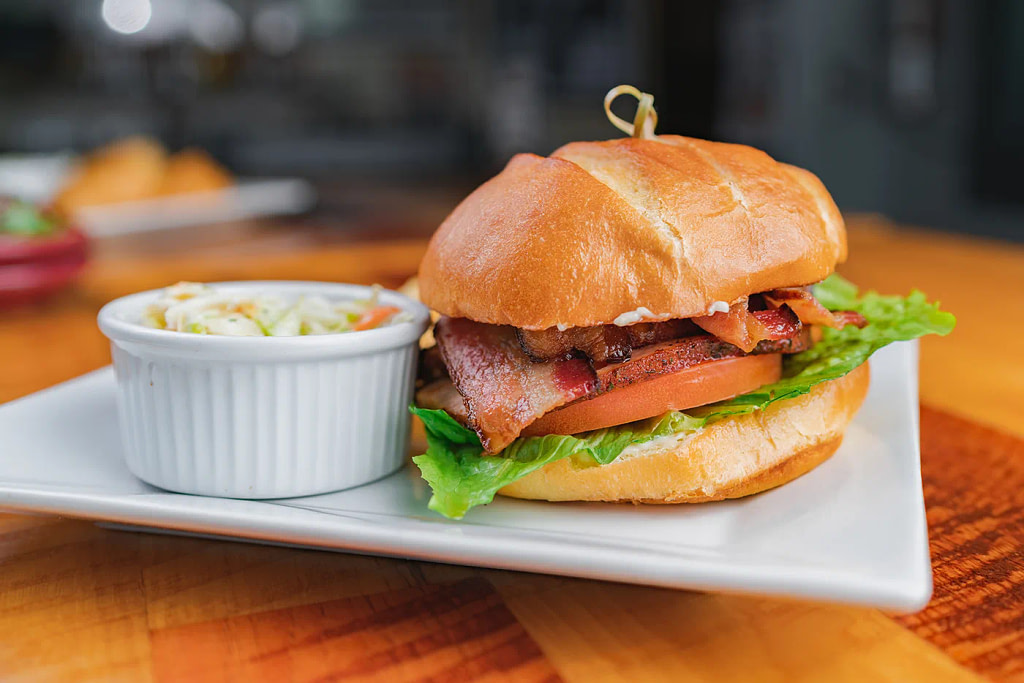 HandleBar: Hipster Hotspot On The North Side

Bicycles, mustaches and beers galore—HandleBar stands apart with its casual-social atmosphere, eclectic interior and comfortable, year-round, pet-friendly patio featuring smokeless fire pits for the cooler months. It’s centered as a gathering place for flannelclad beer enthusiasts or those seeking a cool beverage or bite to eat after a long day at work. HandleBar’s menu boasts a variety of American cuisine options, including an extensive list of vegan alternatives.

Our server, Amanda “Amandalorian” Ouellette, nearly ran from table to table as the Friday evening crowd filled every available space inside and out. We started our evening with a (Deep Eddy Vodka) Peach Mule ($10), an old-fashioned Dr. Pepper in a glass bottle ($3) and a pint of draft Big Sky Moose Drool ($5). The wait was extensive as more patrons filed in, but it was worth it in the long run. Our cheese curd appetizer  ($8) came with a tangy, red tomato marinara sauce on the side. The Wisconsin curds were breaded in a crunchy coating, which kept the gooey cheese contained until broken open, when it would ooze out in the most delectable way possible.

Next, I ordered a pint of Salt Flats Brewery’s Handle Beer ($3), a refreshing and very popular draft amber lager which paired well with my entrée, the Turkey BLAT ($12). The light, surprisingly filling sandwich came on a soft, toasted brioche bun with in-house, hand-sliced hickory smoked turkey breast topped with crisp bacon, fresh lettuce, sliced tomatoes, avocado and a smear of mayonnaise. The tender, moist meat was roughly sliced in thick pieces, and the hint of hickory smoke added a savory element that made this turkey sandwich anything but ordinary. A handful of salted, kettle-cooked chips and a ramekin of in-house coleslaw accompanied the sandwich, the latter of which was lightly dressed and composed of crunchy, fresh vegetables. Diners have the option to upgrade the side to French fries, Wisconsin cheese curds, house-made mac & cheese (vegan or non-) or a side salad.

Another entrée for my party was the War Pigs Wrap ($16). This normally comes with smoked pulled pork, but they were out of this meat addition, so we had it replaced with smoked chicken breast. While the smoked pulled pork would have been delicious, so was the marriage of the substituted chicken with the crispy fried onions, cheesy pasta and flour tortilla. Their house-made mac & cheese, much like their coleslaw, was not over-sauced and was covered with a reasonable amount of cheesy béchamel. The side of steak fries was well seasoned with HandleBar’s house seasoning and came with a ramekin of the Utah favorite, fry sauce. Our table’s final entrée was an order of the Loaded Baked Mac & Cheese ($9). As this is also supposed to come with smoked pulled pork, we substituted for the smoked chicken breast. The chicken, much like the turkey, was not dry or tough but was well-cooked and seasoned expertly. Chunks of green bell pepper were mixed  with the cheesy pasta, which allowed for a touch of needed texture to the otherwise soft meal.

HandleBar is Salt Lake City’s very own cycling-obsessed, mustachioed bar and restaurant. With a rough 50/50 split of omni and vegan food options, dozens of beer choices (draft and canned) and a full bar, there is plenty to choose from. From brunch to lunch to dinner to snacks, no one can patron this establishment and leave unsatisfied. A menu packed with comfort foods that won’t leave guests overstuffed and lethargic is a menu everyone should try at least once. While they have the space, they do request that parties remain ten diners or less so as to not overwhelm the staff or kitchen. To accommodate for the current pandemic climate, they sanitize each table before and after its use. For more information and updates, follow @HandleBarSLC on Facebook and Instagram, or find HandleBar on Yelp and Untappd.