Throughout my culinary journeys, I’ve had the pleasure of coming across a few establishments that are holding out against the growing tide of mass-produced faux meat and trafficking cryogenically frozen vegetables from halfway across the country. These are restaurants where food is prepared to be enjoyed, not scarfed. Les Madeleines has been around for a decade, and I wish I had taken advantage of its complete culinary catalogue much earlier than I did. 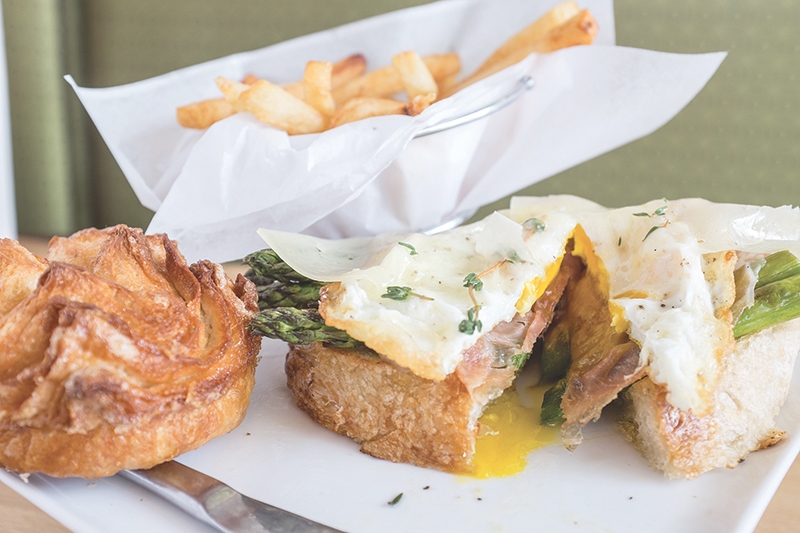 The Kouing Aman and Madrid Sandwich, from Les Madeleines, demand your attention with each bite. Photo: John Barkiple

SALT LAKE CITY, UT 84111
Breakfast
Tues. – Sat. 8 a.m. – 10:30 a.m.
Lunch
Tues. – Sat. 11:30 a.m. – 2:30 p.m.
Bakery
Tues. – Sat. 8 a.m. – 4 p.m.
T. 801.355.2294
les-madeleines.com
It’s no secret that many purveyors of modern cuisine emphasize the speed at which they can fill an order and send customers on their way. This practice has opened the floodgates of cheaply produced food that is harvested in gigantic processing factories, frozen and then shipped all over the country. Not only is this practice unappetizing, it is slowly killing the romanticism that comes from going out to eat.
Throughout my culinary journeys, however, I’ve had the pleasure of coming across a few establishments that are holding out against the growing tide of mass-produced faux meat and trafficking cryogenically frozen vegetables from halfway across the country. These are restaurants where food is prepared to be enjoyed, not scarfed. Les Madeleines has been around for a decade, and I wish I had taken advantage of its complete culinary catalogue much earlier than I did.
My first trip to Les Madeleines had more to do with serendipity than anything else. I happened to be in the area, found myself craving something sweet, and popped in to scope out their selection. I was just going to get something little, but I was lured into the siren song of their specialty—the Kouing Aman ($5.50). It looked like a golden brown flower in full bloom, and I knew that this was the reason that I came to this particular restaurant to satiate an impromptu sweet tooth. This little delight originates in the Brittany region of France, and Les Madeleines is one of the few places in America where you can get one. Of course, I mangled the pronunciation during my order—it’s “queen a-mahn” just in case you find yourself preparing to order one for yourself or, perhaps, have one shipped anywhere in the country.
I took it outside and meant to continue whatever it was that I was doing before my detour, but as soon as I took a bite, I stopped cold. The first few bites are filled with this caramel-y crust that is perfectly light and crisp. Once the middle is exposed, a whole new texture reveals itself as a buttery and chewy miracle. Had this been a donut or other variety of baked good, I would have downed it quickly and moved on. This, however, demanded that I stop whatever I was doing and pay attention.
The Kouing Aman is not the only thing that Les Madeleines takes seriously. Chef Romina Rasmussen’s talent has been featured on Food Network and in Food & Wine magazine, and she has established an environment that takes “made from scratch” to the next level. “If we can do it ourselves, that’s what we do,” Rasmussen says. It’s this dedication and attention to detail that inspires dishes like Pannatone French Toast ($6.95), an eggy breakfast delight filled with raisins that comes served with maple syrup and a bowl of citrus fruit. I expected the fruit—a medley of grapefruit, orange and blood orange—to become overly sour when eaten alongside the sweetness of the syrup, but it all worked together nicely. After Rasmussen explained the arduous process that goes into making genuine Pannatone, I felt guilty for eating it so quickly. It’s a mixture of two different doughs—one of which began from a starter that Rasmussen created last fall. Before the dough is even ready to bake, it has to sit and “proof” for nearly two whole days. When it’s finally ready to come out of the oven, it has to be dried upside down for around six hours to keep its structural integrity.
Les Madeleines also features a lunch menu, stocked with sandwiches and salads, with daily specials depending on seasonal ingredients. During one of our lunch visits, my wife ordered the Sesame Chicken Wrap ($9.95) and I got the Madrid Sandwich ($10.95). The sandwich came with an order of Pommes Frites (half $2.95, full $4.95), which is a good place to start, as they caught me completely off guard. They were so perfectly crispy and chewy that it’s almost vulgar to call them French fries. Served with a deceptively simple garlic aioli, these are far more than a side dish.
The sandwiches were also excellent, in very different ways. The Madrid is an open-faced sandwich with Serrano ham, roasted asparagus, a fried egg and a melty blanket of Manchego cheese. Though this sandwich is ideal as a brunch entrée, I could feasibly eat it either as breakfast or at three in the morning. It’s rich, comforting, and each ingredient shines on its own as well as in the dish as a whole. The Sesame Chicken Wrap is a lighter option, with strips of roasted chicken cloaked in butter lettuce and a rice wrapper. When dipped in the accompanying miso dressing, it tastes like a refreshing spring roll. The chicken stood out to me as especially delicious, and Rasmussen mentioned that it was roasted to perfection on-site—which explained why it had such a fresh flavor.
Even when grabbing a quick lunch or breakfast, it’s impossible to not leave with one of their pastries or cookies for the road. These range from $.95 to $3.95, and I recommend the dulce de leche-filled Alfajores, the buttery Shortbread Cookies and their beautiful Macarons—the Bali was my favorite.
Whether you’re in the market for an indulgent breakfast, a light lunch or something sweet to save for later, Les Madeleines promises a place for those looking for a break from the speed-obsessed world that we now live in.
Photos: