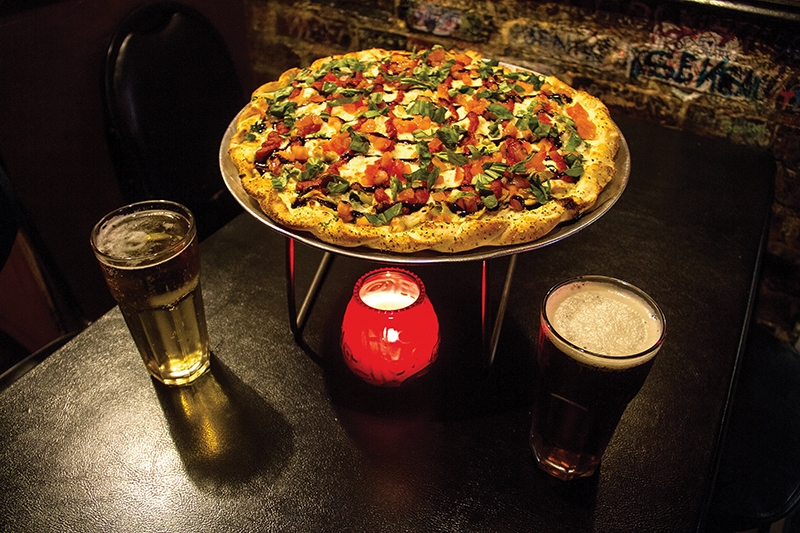 When I transferred from Arizona State up to the University of Utah in 2001, one of the first things I did was seek out good pizza. The shock of living in a new place left me in need of comfort, and pizza had always been my go-to comfort food. Everyone I asked had exactly the same answer: a basement restaurant that had long been the favorite of U of U students and staff—The Pie Pizzeria.

The original Pie Pizzeria location opened in 1980 in the basement under the University Pharmacy (1320 E. 200 S.). For over 30 years, it’s consistently been voted among the top local pizza joints by newspaper and magazine reader polls throughout Utah. This popularity has allowed it to expand to other locations, including Midvale, Ogden, South Jordan and a separate delivery/take-out location on 1300 East, near the original spot. In just one generation, it has become a Utah pizza institution.
Why is it so popular? Well, one reason is size. Their largest pizza measures an industrious 23 inches and boasts of feeding 10 to 12 people. And it does—partly because of its sizable diameter, but also because of the density of the quality cheese and toppings that complete the massive pies. If you don’t need to feed an army, do not fret—they can still help you. They have three other sizes that range from 12 to 16 inches. Where time-proven pizza options like plain cheese or pepperoni are available, one would do well to stray from the norm and dig into The Pie’s specialty menu.
My go-to specialty option is the Stromboli Pie ($12.99 – $33.99). The Stromboli starts with a hearty crust (somewhere between thin and pan style) topped with a house pizza sauce and piled high with a savory blend of pepperoni, sweet onions, green bell peppers, Italian sausage and mozzarella cheese. The sheer amount of meat and cheese atop this one borders on obscene, and I have yet to be able to eat more than two slices. That being said, it is truly a wonderful pie. The layer of veggies cuts some of the richness of the meats, and the crispness of the crust stands up to the weight of what’s on top. Occasionally, I’ll change things up and swap out the peppers for green olives. The end result is a little extra salty, but it brings a serious South American flair to the pizza experience.
As epic as the Stromboli is, there is the need for a lighter side of the menu. This past summer, the restaurant added a new pie to the menu called the Holy Shiitake ($11.99 – $15.99). This pizza cut some of its girth by starting with an extra-thin crust and a basil pesto sauce. It is topped with oven-roasted chicken breast, the one-two punch of shiitake and champignon mushrooms, Sicilian-spiced tomatoes, roasted garlic and mozzarella cheese. A light drizzle of truffle oil is added at the very end. People can be reluctant to sample the lighter fare from a place that specializes in heavier cuisine, but this is an occasion where it makes sense. The Holy Shiitake is a stellar pie. The mushrooms are perfectly cooked, the tomatoes and truffle oil add a rich level of sophistication and the chicken adds a familiar depth of roasted flavor. The thin crust is the perfect medium to tie it all together.
As one of the most popular restaurants in the state, it would be easy for The Pie to rest on its laurels. Thankfully, they still attempt to reach out to a diverse customer base.  One way they do this is by catering to the vegetarian and vegan communities. With over two dozen non-meat toppings to choose from, vegetarians have never had a hard time at The Pie, but with cheese being such an integral part of the pizza experience, vegans have been left with few options. In the last few years, The Pie has made available a brand of non-dairy cheese called Daiya. They could not have made a better choice. In addition to being completely vegan, Daiya cheese melts perfectly, tastes much like standard mozzarella and allows those who don’t consume animal products to experience the pizza in all of its glory. If you’re vegan-curious, try the dairy-free version of the Cheese Pull-A-Parts—a 14-inch pizza crust stuffed with Daiya cheese, brushed with olive oil and sprinkled with garlic and oregano ($7.99). These stuffed breadsticks are served with extra pizza sauce for dipping. The Pie now carries gluten-free dough as well, which makes eating at The Pie a possibility for almost everyone.
As you venture to one of The Pie’s several locations, be mindful that it’s a busy and popular place. It can be crowded on the weekends, especially if you go in the evening. This may result in having to wait for a table and can even mess with delivery times, but once you get your order, none of this matters. The Pie will fill you up in a cozy and relaxing atmosphere. If you’ve never been, or if it’s been a while, do yourself a favor and stop in soon.