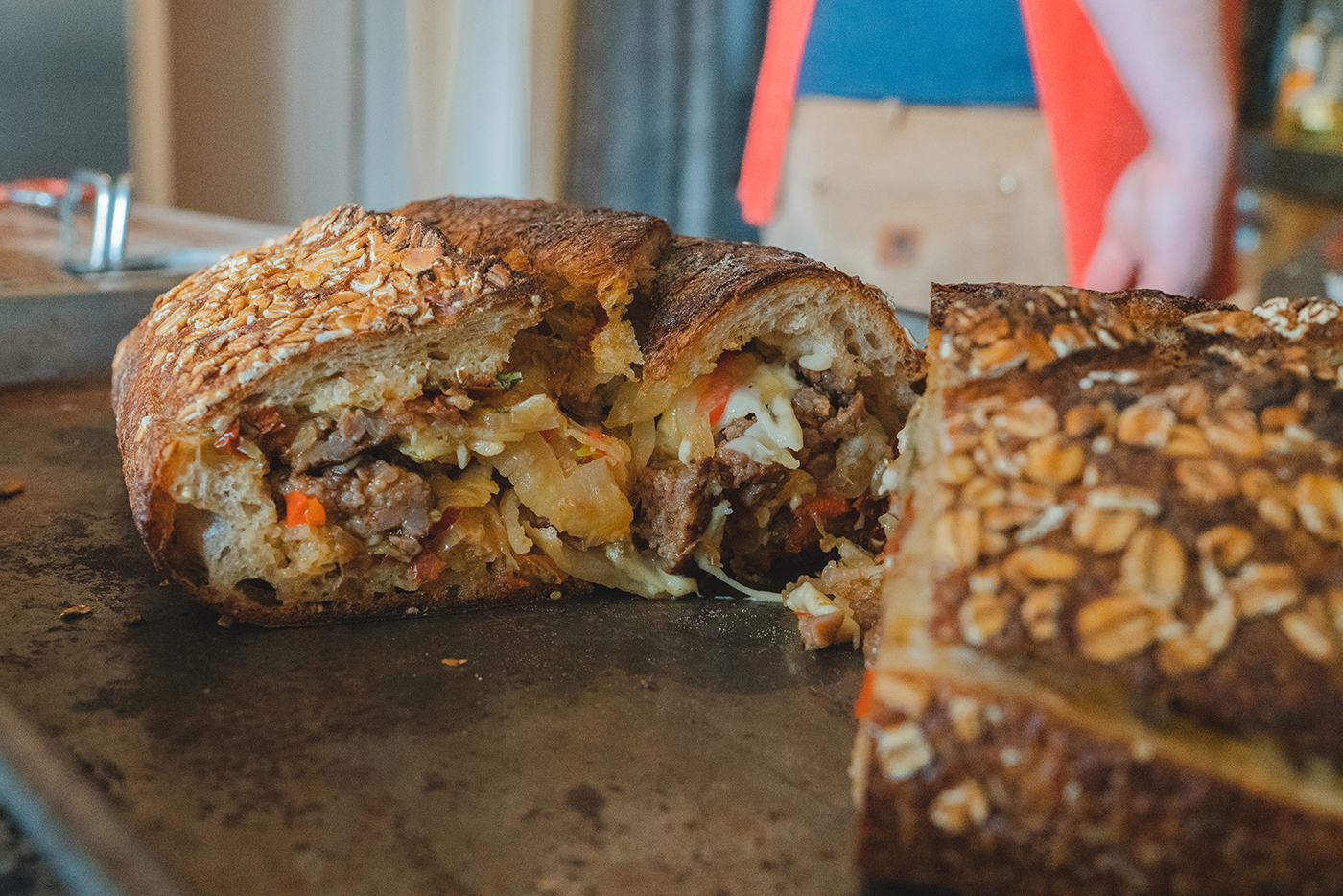 The Shooter’s Sandwich is a century-old idea with a lot of potential for modern life. As a connoisseur of sandwiches, I’m always looking for interesting variations vis-à-vis the unique origin and methodology of this particular bread-and-filling combination in order to interestingly transpose it to a contemporary context. Its history as a food for traveling and being active makes it the perfect sandwich for cycling trips. We’ll cover that history, how to make it and update it for modern tastes.

The Shooter’s Sandwich originated in the first decade of the 20th century among the British aristocracy. The story goes that a clever cook at a wealthy manor house needed to prepare a portable meal for a hunting party departing early in the morning. Taking inspiration from the classic dish Beef Wellington, the cook packed those ingredients into a loaf of bread, wrapped it in paper and pressed it overnight. This made it ideal for packing into saddlebags and easy to eat on the go. The hunters—or “shooters”—appreciated the result, and the sandwich took its name from their chosen pastime.

I first heard about the Shooter’s from an article Tim Hayward wrote for The Guardian in 2010. He had called it the “world’s best sandwich,” so I had to try it, and I wasn’t alone. The sandwich became something of a phenomenon on food and cooking blogs, and soon the internet was awash in versions and variations. I made one, and I’ll admit, I was a little disappointed. A few years later, J. Kenji Lopez-Alt, of Serious Eats fame, did a full breakdown and test of the methodology and reached a similar conclusion but offered solutions. We’ll get to how it might be modified, but to do justice to the improvements, we first have to understand the original.

– 1–2 steaks (such as ribeyes), sized so they fit inside the bread, side by side without stacking

So, why were Lopez-Alt and I disappointed? While the combined ingredients work well for Beef Wellington, they aren’t greatly improved by this combination. The mushrooms don’t benefit from being eaten cold and are often pressed out from between the bread and steak by the pressure of trying to bite through meat you’d normally cut with a knife and fork. While the flavors are good, if you’re not careful, your picture-perfect wedge can fall apart into an expensive mess. But with the idea gristmill and crowd-sourced testing apparatus that is the internet, we can do better.

Let’s treat the Shooter’s as more of a methodology than a strict recipe and see what else we can put inside, while still preserving the portability of the original concept. For this piece, I made two: the classic, and one inspired by Lopez-Alt’s 2014 article on variations. This one had ground Italian sausage, fontina cheese, sautéed peppers, onions and fennel, plus a relish made of capers and sun-dried tomatoes. After pressing, this is baked briefly in a hot oven to make sure everything is melted together, and ends up tasting a bit like pizza. I’ve tried other variations, and most have been good, so don’t be afraid to try new things and get inspired. While our steeds have changed from horses to bicycles, the classic question of a sandwich still exists: What do you think is going to taste good literally smashed between two pieces of bread?