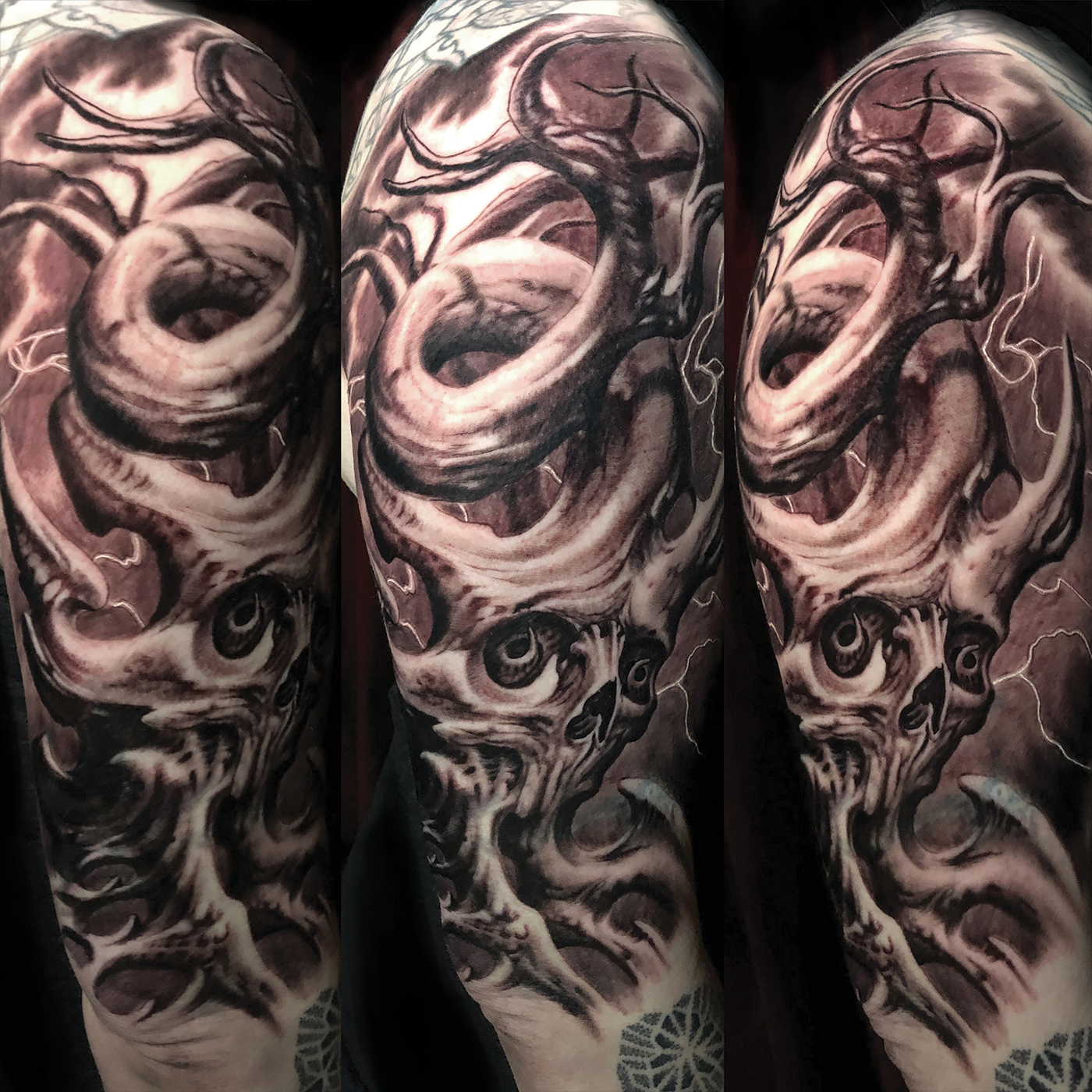 From Magic Mountain to the Painted Temple

Sometime around 1986 at California’s Six Flags’ Magic Mountain theme park, Oak Adams remembers being awestruck for the first time at the sight of tattoos. He was young and racing out of the boy’s room to catch up with mom and dad. He turned a corner at full speed and ran straight into a heavily tattooed man who was standing just around the other side. “I was scared shitless,” Adams says, “but he was the coolest guy I’d ever seen.” Today, Adams has become a model of the same tattooed man that froze him in his tracks as a young boy.

In 2005, Adams opened the first Painted Temple Tattoo and Art Gallery in Provo with his wife, Bleu Adams. Today, it has become the home to some of Salt Lake’s best award-winning tattoo artists. Now in the heart of Salt Lake City, Painted Temple sits at 1443 S. 700 East, and the shop covers everything from traditional, illustrative and old-school fine line to surrealism and trash polka—the list goes on. Adams, who mostly sticks to bio-organic macabre, skulls, faces, portraits and trees, has surrounded himself with artists that he looks up to. “I’m really blessed to work with so many kickass artists that are hungry to improve and focus on art,” he says, noting that the 13 artists in the shop share a combined 150 years of experience between them. He, as well as shop artists Bonnie Seeley and Rick Mcgrath, have been tattooing all over the country for 25 years, while artists like Al Perez and Ryan Cumberledge have both called Salt Lake City home since they began tattooing over a decade ago.

“Each artist specializes in multiple styles and each brings a unique style to Painted Temple that you won’t find anywhere else in the city.”

There are a lot of killer artists along the Wasatch front, but the amount of talent coming from Painted Temple speaks for itself. Matt Morrison, who has been with the shop for six years, puts so much detail into every black-and-grey realism piece he creates, it’s jaw-dropping. Miss Amanda, who will soon be bouncing back and forth with McGrath between SLC and their newly opened shop in Costa Rica, specializes in Japanese art and Art Nouveau. Another talented artist, Walt Watts, has a broad range of styles and mostly focuses on sci-fi, fantasy, mythology and horror. Each artist specializes in multiple styles and each brings a unique style to Painted Temple that you won’t find anywhere else in the city.

When I asked Adams what he looks for in an artist, he says, “We aren’t into rockstar attitudes. We enjoy each other’s critiques and terrible humor. I look for quality of work and attitude, professionalism and accountability.” Adams began “scratching on friends” when he was 16. He never really imagined back then that he’d wind up where he did. However, from the minute he learned how to build a homemade walkman motor machine—also known as a “prison tattoo gun”—from a guy named Quentin, he never really stopped. For Adams, Painted Temple has become a great place to tattoo, learn and grow. Adams attributes this all to the people who trust in them for tattoos. “We love you,” he says, “and we couldn’t do what we do without you.” He looks forward to many more years and many more tattoos at Painted Temple.

For some people, tattoos are a form of self-care. For me, it’s more about self-expression. I got my first tattoo at age 20, and even though I was terrified that mom and dad would see it, I immediately wanted another—which I got a year later at Painted Temple. For anyone who is thinking about getting their first tattoo, I highly recommend doing your homework. Go to paintedtemple.com and check out each artists’ portfolio to find the artist you like best, according to your style. Each multifaceted artist will be sure to make your next tattoo idea come to fruition at Painted Temple—the best thing to do is to check their work out yourself. Just like everywhere else during the pandemic, Painted Temple is taking every extra precaution to make sure the shop is clean, safe and comfortable for every client. For more information, head to paintedtemple.com.