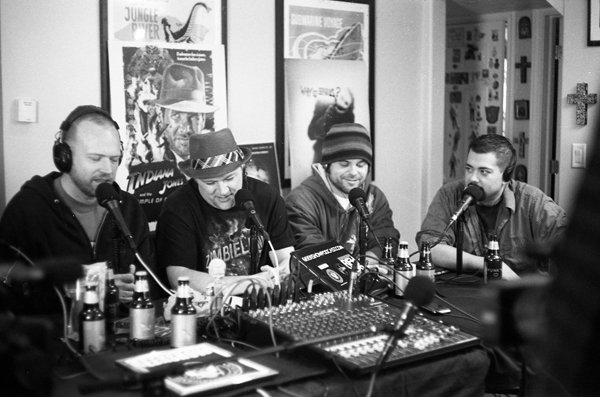 Geek Show Us All

Lurking within our fair city is an ugly underground subculture, growing dangerously strong in number. What will this country come to when these “creatures,” which were once afraid to show themselves in the sunlight, are  free to roam and openly declare their love of things like Star Trek, Star Wars and of all things comic books?! Ladies and gentlemen, the scourge of our community is no longer the gang member, but the geek. Lying in wait for their time to strike, the geeks have made their play for power. At the forefront of the movement is The Geek Show. Kerry Jackson of X96’s Radio From Hell and his cohorts have gathered in his basement and constructed a podcast that not only covers news of the sci-fi world and beyond, but has been entertaining enough to garner 20,000 plus downloads per episode. I had to see for myself what these geeks had been up to, so I ventured alone into the basement of a seemingly normal home and entered the world of the geek.

As I peered about the room where The Geek Show is usually recorded, I noticed the beers were numerous and the mood was light, as the conversations on nerdy topics had already begun. Mixed between the six gentlemen gathered around the table surrounded by microphones and brews were comics and action figures that would undoubtedly be topics of discussion. My eyes wandered from the production and reached the door of the adjacent room. Through a crack I could see an enormous treasure trove of action figures, space ships, and many other toys that appeared to be consuming the room and had begun to spill out into the rest of the home. As the show began, I took my seat off to the side, knowing I was either in the presence of great passion or borderline fanaticism. I’d soon find out for sure.

For over 10 years, Jackson has seen the need for a geek, sci-fi and superhero talk show as cult mediums like comic book movies and TV shows have risen in popularity. Starting out with an occasional show on X96 called Geek Chat, Jackson invited fellow self-proclaimed geeks, like Deseret News movie critic Jeff Vice, toy maker Leigh George Kade and local bartender/wildcard Shannon Barnson to talk about their obsessions. This led to Vice and Jackson hosting a short-lived, ill-fated late night sci-fi movie showcase on KJZZ 14. After running into several walls, it was determined that a podcast would be the best way to go.

“It was like a running joke for about two years before we started,” says Vice. “We’d get together and Kerry would say we’re gonna do this, we’re really gonna do this, and Shannon and I would just look at each other with doubt in our eyes.”

In order to create a show about this geek stuff more regularly, Jackson needed a producer who was forward-thinking and could see the potential in a geek-themed podcast. Enter: super villain producer Zack Shutt. Once Shutt was on board, there was no stopping them, and The Geek Show podcast was on its way. “I had the idea for a podcast, but I didn’t have a capable tech guy at the station,” says Jackson. “The guy that was there was not only incapable, but it was hard enough to get him to barely do his job, so once Zack came on board, I went ‘Ahh.., boy genius! My own super villain.’”

Even after securing Shutt’s services, Jackson had a hard time convincing X96 to support the project. Jackson and his new boy wonder producer decided, like vigilantes, they’d take matters into their own hands. “We just bought the stuff and did it,” says Jackson, “I had waited for X96 and Simmons Media to get off their asses, but they just didn’t get it. So I realized that we couldn’t wait for these old radio guys, so we just did it. We didn’t ask for permission. We just threw it on and it’s gained momentum ever since, and once they realized what it could be, they got behind it a little bit. Well, they’re starting to, anyway.”

As the first show of the day (they record three at a time) finishes in the basement, everything from current events in comic books to why Hasbro has the edge on every other toy maker out there has been covered. The recording ends as each person at the table makes recommendations for DVDs, action figures and books. The strange thing is that the vibe of the room doesn’t change once recording stops. Everyone is still talking about stuff they like, stuff they hate, what comics they wanted to see adapted to movies and which forthcoming sequel was headed for disaster. We break for lunch and I decide to investigate where it all began for these guys.

“For many of us, it was this gateway where when you got sick, your mom would buy you comics to read while you got better,” says Kade. “That…and watching the original Star Trek series on TV.” As Jackson runs downstairs, he says, “I’ll actually show you where it started for me.” He returns moments later with a kiddy dinette set adorned with vintage pictures of Batman, Robin and the Joker. “This was just something my parents off-handedly bought, thinking, ‘Oh, Kerry might like this,’ but it was my first exposure to Batman.”

The current panel, consisting of Jackson, Kade, Vice, Barnson, and Deseret News TV critic Scott Pierce, cranks out shows regularly. Armed with the help of local sponsors like PC Laptops and Dr. Volt’s Comic Connection, the panel hosts a free monthly movie night at Brewvies, usually featuring science fiction choices that can be as laughable as they are entertaining, like Plan 9 From Outer Space or Smokey and the Bandit. It is also at movie night where fans of the podcast step into the wildcard lounge where Shannon holds court and anyone is able to strike up a conversation with their favorite panelist.

“Movie night was mine and Shannon’s baby,” says Vice. “Andy Murphy, the former manager [of Brewvies], had approached me about doing some programming once a month, and we thought about showing the best of the Star Trek and Star Wars movies, and we pitched to the rest of the panel and it grew from there. We all have movies we lobby for and once most of the other panelists agree then it’s in, but it has been interesting to watch movie night grow to where now the movie is almost secondary. Half the people that come are in the theater and the other half are out in the lounge. It has become a very successful event and the guys at Brewvies sell a lot of burgers and beer.”

As taping comes to an end for the day, I want to find out the intentions of this crew of geeks. What is their goal for what they have created?  “The podcast exists for people to share what they like and not take it so damn seriously,” says Kade. “The greatest thing about geek-dom is also the worst thing about it, and that is that we get so passionate about it and so caught up that we blindside ourselves, we ostracize ourselves, we separate ourselves from society. That geek badge is a little dangerous, and it shouldn’t be.”

“The mission statement of The Geek Show has always been the immortal line from the Mystery Science Theater 3000 theme song,” says Jackson. “‘If you’re wondering how they eat or breath and other science facts, just repeat to yourself it’s just a show, I should really just relax.’ It’s all taken too seriously. You can want to be Luke Skywalker and still make fun of what a whiney bitch he is, and you realize that otherwise you’re going to end up alone in your basement with Cheeto dust on your fingers.”

To me, it was a fun time to hear people discuss their passions while still having a good time and laughing about themselves. I now know it’s ok to be the geek that I am, The Geek show has shown me that I can laugh at myself while still being proud of my comic book collection. So don’t wait another eon and go warp speed to your computer to check out thegeekshowpodcast.com. Make sure to come out to movie night the last Sunday of every month at Brewvies.